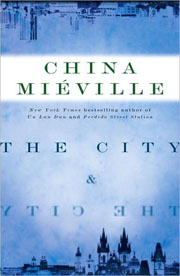 Imagine walking down a city street. Next, imagine that when you walk past someone who doesn’t look like you, or dress like you, or who speaks a shrill other language, you completely ignore them. In fact, you’re expected to ignore these foreign passersby. You ignore countless aromatic cafes, traffic disputes, and groping lovers just an arm’s length away. You ignore the entire culture so methodically that eventually you “unsee” it.

It sounds like institutionalized racism, but this is everyday reality for the passive-aggressive sister cities Ul Qoma and Besźel in China Miéville’s The City & the City. Districts of the two cities intertwine and occasionally are layered atop one another. “Crosshatched” neighborhoods are pragmatically postmodern locales: they lie in Besźel and Ul Qoma at the same time, belonging to both and neither. Despite their relative proximity, two neighbors would need to travel across the city, undergo a rigid border inspection, and drive back to meet each other. Reaching out of the kitchen window and simply waving would be irresponsible and dangerous. Both Besźel’s and Ul Qoma’s citizens deftly navigate this complex urban infrastructure, even while driving busy, crosshatched city streets, without breaching the unspeakably complex borders of the other metropolis.

When a woman’s body is found outside of a slummy skatepark in Besźel, Inspector Borlú begins an investigation complicated by the full measure of bureaucratic diplomacy, cultural miscommunication, and a vacuum of evidence. The victim is discovered in Besźel, which has the look and feel of a Soviet-era burg once-swollen with Communist grandiosity and corroded after the collapse (think Warsaw or Bucharest). Scarce clues eventually lead Borlú to Ul Qoma, which more closely resembles a Middle-Eastern boomtown. Typically, a mysterious paramilitary force called Breach cracks down on boundary-crossing violations—often arriving out of thin air and vanishing with offenders just as swiftly—but the woman’s murderer pulls off the crime by legally crossing the Besźel-Ul Qoma border.

Miéville’s novel resembles a digital media mashup, which pools the functionality of multiple Internet applications and retools them to serve a more specific purpose. For example, an online program called Ground Zero, based on Google Maps software, allows one to calculate the range and severity of an atomic bomb dropped anywhere on Earth. (If you were so inclined, Ground Zero could inform you at what distance you would be safe from radiation burns if you dropped a 340-kiloton B61 nuke on your ex-boyfriend’s house.) In true mashup fashion, Miéville has retooled the most crucial and engaging genre tropes from hardboiled noir, conspiracy theory thrillers, and urban dramas to explore extreme political, racial, archaeological and infrastructural concepts. Even Borlú, in his own manner, shares characteristics with the most successful new media enterprises. He is not a whip-smart, almost omniscient super-sleuth; instead he is simple, adaptive, and experimental in his investigation.

The book also reveals Miéville’s keen grasp of global politics. Various nationalistic fringe groups in Besźel and Ul Qoma advocate separatism and hate; contrarily, the Unificationists want to shatter the arcane, arbitrary borders and assemble a massive, integrated city-state. The discourse of these political factions might just as easily map on to struggling areas like the Balkans or Rwanda. Further, Borlú’s international murder case echoes the challenges of global terrorism. To what extent can a nation prevent crimes from unaffiliated foreigners? Who should enforce international law, and how?

To balance out the heady themes of globalization, The City & the City is peppered with decadent conspiracy theories. Borlú increasingly links the murder to Between the City and the City, a theoretical book banned in Besźel and Ul Qoma. The book holds about as much scholarly clout in the universe of the novel as Laurence Gardner’s Bloodline of the Holy Grail does in ours. Nevertheless, Borlú plummets into the controversy surrounding Orciny, a mythical third city that allegedly thrives under the nose of Ul Qomans, Besź residents, and even Breach. Orciny’s existence is contentious because the early history and separation of the two tangible cities is largely unknown. As Borlú elaborates: “that beginning was a shadow in history, an unknown—records effaced and vanished for a century either side. Anything could have happened. From that historically brief quite opaque moment came the chaos of our material history, an anarchy of chronology, of mismatched remnants that delighted and horrified investigators.”

Rumors circulate hinting that Orciny clandestinely manipulates the political destiny of Besźel and Ul Qoma like tactful Illuminati. In such a context, Borlú must see through political subterfuge, the fog of history, and the invisible walls that divide two cities to solve the murder of a young woman. It is impossible to know the city without walking down its crooked alleys and congested boulevards. You’ve never visited a place quite like it. But with patience and practice, you’ll fit right in.