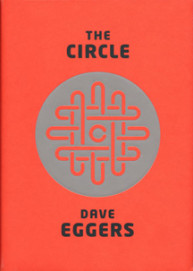 With the author’s signature flair for plumbing societal ills, Dave Eggers’s latest novel The Circle focuses on Mae Holland, a twenty-four-year-old college graduate recruited to work at the world’s leading Internet technology company, something akin to Google. Readers will think of Google Glass when Mae learns about the “Retinal Interface” Circlers use to communicate. Eggers postulates what the world might look like if such a company dominated the globe with universal membership.

When Mae joins the Circle, she is impressed by its various altruistic programs. Who would oppose putting a bracelet on every child to prevent kidnapping? Why not—instead of a bracelet—a mandatory chip? Or how about cameras throughout the world to monitor not only criminals but oppressive governments? “All that happens must be known” is the motivating mantra for the Circle. As the Circle evolves to gain more control, Mae helps to articulate the company’s goals: “Privacy is Theft”; “Secrets are Lies”; “Sharing is Caring.”

The Circle is an intriguing examination of how the convenience and utility of technology may come to imprison us. Mae’s friends and lovers present different perspectives about what matters most in people’s lives: transparency or privacy. Similarly, the trajectory of Mae’s relationship with her parents helps track her development at the Circle, which becomes ever more intrusive; the notion of “extracurricular activities” turns out to be mandatory rather than elective.

Mae is not particularly reflective about the corporate culture she inhabits; however, Eggers deftly juxtaposes natural and urban scenes to imply that something fundamental is threatened by it. In contrast with the transparency expected at the Circle campus, where employees are locatable through proprietary social networks, Mae enjoys kayaking in the San Francisco Bay and contemplates wildlife “hidden in the dark water, in their black parallel world, and knowing they were there, but not knowing where, or really anything else, felt, at that moment, strangely right.” Similarly, when discovering a bird’s nest on an island, Mae thinks, “Could she lift it, bring it down to her to peek in? Just for a second? She could, couldn’t she, and then put it right back? No. She knew enough to know she couldn’t. If she did, she’d ruin whatever was inside.” These moments highlight the beauty of mystery and privacy in nature that defies the intrusion of constant data collection.

Why is Mae vulnerable to the lure of transparency? Both Eggers and her corporate overlords chose Mae to be the messenger for a thesis of how techno-dystopia could overtake humanity. It’s a disconcerting and compelling thesis, and an engaging novel presented in efficient smooth prose, but one that feels flawed by insufficient character-building and arbitrarily underdeveloped defiance. Nevertheless, as The Circle closes, it looks to be one that would fit well in Dante’s Inferno. Eggers warns us to get outside the lines while there’s still time.