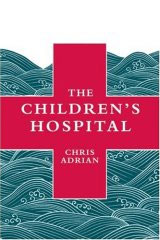 Humankind’s attraction to end-of-the-world scenarios might indicate some underlying guilty consciousnesses—whatever we’re supposed to be doing here on earth, we’re not doing a very good job of it. Chris Adrian taps into that fear/fascination with his new novel, The Children’s Hospital, where the microcosm of a hospital becomes a focusing lens with which to examine the reactions of a small surviving sample of people lost and afloat in a strange sort of ark. What at first seems so random and odd—a children’s hospital suddenly floating above seven miles of condemnatory, inky-black water—later seems so obvious, such a necessary conceit. What better way to bring together the meek and the proud, the advocates and cynics, the best and worst of humanity, than a children’s hospital, where the patients serve as reminders of how far we’ve fallen—abused, forgotten, stricken by horrible diseases, some loved a little too much for their own good. The innocent have no say in their treatment or mistreatment, most of the time.

As Adrian tells us, “It takes four angels to oversee an apocalypse: a recorder to make the book that would be scripture in the new world; a preserver to comfort and to save those selected to be the first generation; an accuser to remind them why they suffer; and a destroyer to revoke the promise of survival and redemption, and to teach them the awful truth about furious sheltering grace.” By design then, the hospital is infused with and driven by the preserving angel, who provides the ark’s inhabitants with food, clothing, materials for making just about anything, movies that existed and didn’t exist, her own special brand of cherubic song, and insipid encouragement that puts everyone on edge. Adrian builds his story deftly, moving between the voices of these angels who each have their say about their role in this particular apocalypse, and following, in particular, an intern named Jemma Claflin. (Those who have read Adrian’s first novel, Gob’s Grief, may recognize that name, and Jemma may be related to “the notorious Claflins of Homer, Ohio,”—however Gob’s Grief takes place during and after the American Civil War, so Jemma’s destiny may have rained down upon her through generations of these ne’er-do-wells and odd folk.) Although a lowly intern who constantly questions her own abilities, Jemma is the focus of these angels, particularly the recording angel, whose “expiation” and “reward” is “to orbit Jemma Claflin from her birth to her death.” Her lineage and role in this saga is pivotal. Haunted by the ghosts of her dead family, and especially her beloved brother Calvin (who, as we learn from the recording angel, committed suicide in a ghastly, ritualistic manner), Jemma believes herself to be cursed to see everyone she loves die, and she is not far off in her assessment.

As the story progresses, it appears that some of these angels are aspects of her dead brother come back to watch over Jemma—though they are also aspects of the human psyche, the warring facets of a self that at once wants to save and destroy everything it holds dear. This is reflected in Jemma and Calvin’s parents—self involved, raging, loving, over-protective, and ultimately failures. Whether in reflection of his upbringing, or as an innate sensibility, Calvin was always intent on destroying himself, of “going” as he puts it (“Going is scary. Important things are scary. But it has to happen,” Calvin tells Jemma on her fourth birthday), and seemed to foresee the necessity for his death. Jemma, of course, cannot understand the reason for any of these events happening to her and falls back on superstitions, fearing for her boyfriend and fellow intern, Rob Dickens. Her best friend Vivian, another surviving med student, embarks on a list of all the reasons this “Thing” happened to them.

The “Thing” results in endless rounds for the doctors and med students—36-hour shifts that fulfill the nightmares med students must have as they walk zombie-like through rooms and rooms of patients, the feeling that they’ve always been there and always will be there. Adrian makes the nightmare come true in a macabre yet hilarious manner. He populates the hospital with all the likely suspects: vain, self-important doctors, inept med students, eye-rolling nurses, hysterical mothers. They’re all there and they don’t really change their ways after this biblical disaster. Jemma, who becomes pregnant from an early tryst with Rob (actually on the day the flood happened), finally comes into her own when she suddenly develops fiery-green healing powers and zaps the illness out of 698 of the 699 sick children, the only exception being the loveable psych patient Pickie Beecher, a seven-year-old boy who was somehow air-lifted from Gob’s Grief—and if you read Adrian’s first novel (and I highly recommend you do because it is startlingly beautiful), you will find out where Pickie Beecher comes from and why the protecting angel calls him an “abomination.” But once every little illness has been eradicated by Jemma’s scary powers, what is there left to do in the hospital?

Take away the children and nothing would change—she knew that, too. The unfulfilled ambitions of an empty hospital make it even more intensely hospital-like. A hundred nurses with no data to fill the many boxes of their flow sheets, surgeons sharpening their knives in anticipation of a feast never to arrive, radiologists staring forlornly at their empty light boxes; in their lonely boredom they’d manufacture a hospital-feeling so intense Jemma was sure it would be palpable and oppressive. Leave the children and take away the sickness and then…what?

In The Children’s Hospital, the end of the world (as we know it) begins with an inception, the conceiving of a child between Jemma and Rob, and the story develops like the baby within her womb—growing, maturing to the point when it has to either come out or die. This is the story that needs to be told, the reason why the world ends (“It wasn’t global warming!” chimes a hopeful slogan to boost employee morale). Adrian, with great humor, compassion, and lyricism, deftly chronicles the adaptation of the survivors to this new reality, revealing in a microcosm the failures and achievements of flawed people—and particularly flawed Americans. Our struggle to find or make meaning out of the seemingly random and cruel things that happen to us has, in part, resulted in our culture of materialism and corruption and war. It’s hard to see the Bigger Picture from within the Big Picture, and perhaps we need to be out of the picture entirely (i.e. dead) to see it. At its core, The Children’s Hospital is largely about belief and faith and the imagination—an imagination so powerful as to think up a whole new world, or at least a whole new way to get to it.