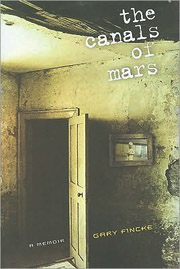 The Canals of Mars, Gary Fincke’s memoir in parts, comprises five self-defining categories of memories (Beginnings, God, Work, Weakness, Endings). These categories, as you can just about tell from their titles, feature overlapping content and theme, but the organization allows Fincke to emphasize aspects of his life in a roughly chronological sequence. The perfectionism his parents encourage in him in the Beginnings section becomes the devotion he gently rebels against in the God section, which becomes his only relatively hard-working approach to a string of low-skill jobs, and finally becomes, in Weakness, the reluctant acceptance of his asthma, poor eye sight, and appreciation of beer. It’s only in Endings, with Fincke as an adult, his parents dead or dying, that he seems freed from the guilt of imperfection. But this is also when, thanks to his writing, he’s become the kind of hard worker his parents or God might respect.

The emergence of the subject’s self (shaped as it still is by childhood circumstances) plays out in the book’s narration as well. In early chapters Fincke blends into his background, highlighting the geographical, historical, and familial contexts that played such large roles in shaping him. It’s as if in his childhood the author’s identity is overwhelmed by the larger forces of the world, the larger personalities of his father and grandfather, and the moral authority of his parents and church. It’s not until halfway through the book that a clear picture of the narrator presents itself. While, by the reasoning given above, this grants narrative legitimacy, it also makes the first half of the book less interesting to read. Early chapters run almost completely away from the common memoirist’s tactic of putting an idiosyncratic narrator front and center, and give us almost no narrator. When one does coalesce, it’s as a sort of “normal guy” who works as a stand-in for the reader and keeps much attention directed toward the world outside his head—on the passing of the industrial era in Pittsburgh and the ascendency of mass-produced junk (and the accompanying death of places like his father’s bakery).

In the book’s most engaging sections—Work and Weakness—the “normal guy” approach allows readers to get a sense of Fincke as a good person struggling to create his own life as he begins leaving his childhood behind while that childhood world itself begins to fade away. Building a clay tennis court as an adolescent, he confirms that he’s not as hard a worker as his father and gets his first taste of class-consciousness. Summer jobs as a janitor and a factory worker show him worlds he where doesn’t, and doesn’t want to, fit in. Witnessing enough irreversible alcohol-related mistakes in college, he’s able to curb his own binge drinking. In these and other struggles for an authentic self, Fincke demonstrates how such a project—impossible, though, to ever complete—might be steadily pursued.