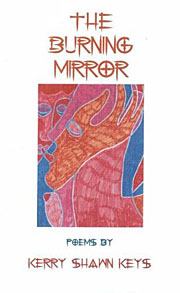 Readers encountering Kerry Shawn Keys for the first time may be confused by his movement from rhapsodic lines (e.g., “The kitchen is eating lava from a shoe beneath the stove”) to somber, even at times prosaic, meditations on time, death, heresy, and other weighty topics. At its best, the first kind of poetry is pleasurably dizzying in its jamming together of images wrenched from normal contexts, but at worst seems almost programmatic, as if words from a large vocabulary list were being dropped randomly into a sentence. Perhaps a justification can be found in “What Do You Write About” which ends with “you, here, stuck, a prisoner in the soft-/deposit of this spoken sentence.”

Sometimes, it is enough to sit and watch the pyrotechnics without looking for a message. At other times, reading Keys’s poems is like watching traffic in Paris: there may be some principle of order, but the uninitiated can’t discern it. However, a number of poems deserve not merely admiration for their precisely rendered detail, but contemplation of the vision that emerges. “Vida,” for example, an autumnal poem with molding leaves and “almost posthumous wasps,” asserts at the end: “The tree of life is a willow weeping on water. / The Tree of knowledge is a door standing in the forest.”

Many of the poems in the book’s third section, “Back of the Belt,” appeal not just to the fancy, in Coleridge’s terms, but to the imagination. “Almost Invisible” is a portrait of a woman alone, perhaps lonely, in grey and muted tones. In “My Ramada Armada,” the speaker engages in a silent dialogue with the picture of an egret who just might, in response to his kiss, “wind the sheets up / in her beak and carry me to another shore” in a kind of rebirth. “At Kant’s Grave” fuses subject and images into a somber whole.

Keys often combines meditation and dissociation effectively. “Governor of Goodwill”—the source of cheap clothing, not the intangible asset—may be metamorphosed into an animal, or Ovid, or perhaps “a poet or a barber at the door of Paradise.” At the end, though, the speaker imagines the man on the move, perhaps “hitchhiking to New York for a fresh start.” Here the poem has a single character and a kind of plot to which the wealth of images is subordinated. Even better is “Chernobyl,” where after a list of the more obvious effects of the disaster (“in Finland reindeer are banned from the manger scene”), we find “a child with a hummingbird for a nose / stares at the lampshade waiting for the sun to rise.” The conclusion is startling but not unimaginable.

The poet creates an even more effective jeremiad in “The Bush-Blair Link: Baghdad to the London Bombings,” mingling the Potomac, the Thames, the Styx, and the Tigris as places where the onlooker can find his or her image. Yet, though “Everything is abandoned,” the prophet is “the pure thing of Death, featureless amputee, spokesman / for the green flags of ferns waving over Hollywood and Babylon— / I’m becoming dark and free, you can’t hear me, you never could.”

It is obvious from the book that Keys’s art needs the freedom of association across images and cultures, but it also seems clear that it benefits most from the discipline imposed by a narrative thread, however improbable, or by a particular idea. Regardless, The Burning Mirror is a fitting introduction to a poet who has penned over thirty volumes of poems and translations.