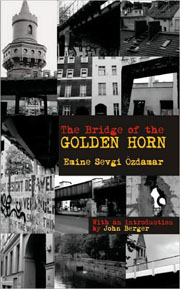 At once tiresome and tiring, Emine Sevgi Özdamar’s The Bridge of the Golden Horn has occasional stirrings of life, humor, and interest that keep one hoping things will improve. The unnamed narrator is a young Turkish teenager whom we follow from age sixteen to twenty-five, beginning in the turbulent late 1960s. She starts off as a worker in West Germany, where she is introduced to socialism and sexual desire. As the novel continues, she desires sex more and more, has an abortion, and reads Jack London, Engels, Gorky, and Brecht, while addressing everyone from a newfound Marxist point of view.

It could be that this character is a stand-in for the state of Turkish affairs at this time in history, yet it’s hard to believe that is Özdamar’s goal. Rather, we watch as the unnamed narrator moves through a few stages of life, shy at first, making friends in her new women's hostel while working in a factory, open to poetic thoughts, interested in the theater as an actress, repeating words and ideas over and over, and giving motivations to objects and occurrences:

Angel had a soft voice and spoke very slowly. So we also began to speak more slowly. I saw my slowed-down arm and hand movements as if in a slow-motion film, my feet rose slowly, came down on the street again, the snow fell slowly, our hair floated slowly, the cigarette ends moved slowly in front of our feet, the dry grass between the disused tracks . . . moved slowly . . . . Even the clock in the hostel lounge ticked more slowly and made the evening long. The evening sat down slowly on the chairs against the walls.

In this set of projections, suitable for a sheltered teenager, and one of many found throughout the novel, we see that for the narrator, all life is imbued with her own feelings. This technique doesn’t create a character so much as assemble an egoist.

After men come on the scene, the narrator shows some development. As the world widens, her legs open more often, which makes for dull reading if it’s not part of something larger. What the narrator does, in the area of sex, is itch to lose her “diamond,” then say yes to any man who finds her attractive (and all men do). She does this at some risk, it would seem, to her own person, such as having her back burned by a cigarette when alone with four men.

With nothing in the narrator to scorn or admire, we may legitimately ask what we’re to take from this novel that is of literary interest. The plot is simple, but not rendered in a way that makes it memorable. Attempts at characterization fail, and what results are occasional blurry puppets bearing male or female names. Once the action returns to Turkey, the civil unrest there in the late 1960s and early 1970s consume the narrative. The last fifty or so pages present a one-sided perspective of certain aspects of Turkish history, as in this passage:

The trade unions organized more strikes, the workers occupied factories, bombs exploded at the generals’ doors. For days people in Istanbul ate sharks, and as they put the fish in their mouths, they heard the bombs exploding, left the fish on the plate, and ran to the window or into the street. As a result many fish ended up in the bin, at night I saw cats everywhere, which gathered around the rubbish bins and ate the sharks. The people were banned from the streets. The military banned all films and plays in which topics like theft and kidnapping occurred. They banned trade unions and meetings. If more than three people went into a house together, they were suspect. The police arrested and tortured. The cries were not heard, the walls behind which the torture took place were thick, but weeping mothers and fathers could be heard from many houses. The police searched houses for left-wing books, one of the policemen told the paper: “I’ve injured my back from carrying all the communist books.”

What are we to make of subjective history that doesn’t have the virtue of being set down with style, or with special insight? There’s little differentiation in tone from people eating sharks to cats eating sharks, so that neither is more significant than the other. The breathless sentences—a feature throughout, signaled by comma placement—are meant to lure us into the narrator’s state of mind, but there is no depth there. Of the unrest that filled Turkey at this time, Özdamar presents only the surface. We’re meant to accept as a given that this or that oppressive measure is brutal, but when these measures are presented without any distinctiveness or liveliness, what comes across is one long, uniform wave that never shatters against a headland or wipes out a shore.

It should be noted that in parts of the earlier sections, Özdamar does write well. If she had worked harder on the rest, and not stuffed The Bridge of the Golden Horn with sequences equivalent to "then we did this, then we did that" as well as filler, this novel would have been much richer.