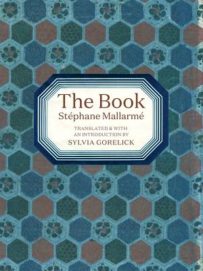 “Yes, I know,” wrote the experimental poet Stéphane Mallarmé in May of 1866 in the midst of a spiritual crisis, “we are merely empty forms of matter, but we are indeed sublime for having invented God and the soul . . . I want to gaze upon matter, fully conscious that it exists, and yet launching myself fully into Dream, despite its knowledge that Dream has no existence.”1 A year later, emerging from the extended struggle, he reported that “I still need to look at myself in that mirror in order to think and that if it were not in front of this desk on which I’m writing to you, I would become the Void once again. That will let you know that I am now impersonal and no longer the Stéphane that you knew,—but a capacity possessed by the spiritual Universe to see itself and develop itself, through what was once me.”2

The ambiguous, unachievably ambitious project that Mallarmé called The Book was conceived in the wake of this experience, and remained the primary, hermetic vehicle for the atheist mysticism that now became his life’s project until his death thirty-two years later. It was to be a performance score making use of aleatory and recombinatory processes, a text with no final or definitive shape, escaping chronology and closure—a text as process and capacity, not authority and form. This unfinished project, which few even in his inner circle saw, was already legendary within the avant-garde in his own day, and has since attained near mythic status. Now what remains of it is finally available in its properly formatted form and rendered in English by Sylvia Gorelick, whose attentive and thoughtful translation has made clearer than ever the remarkable extent to which Mallarmé presaged and laid the groundwork for an array of cultural and conceptual experiments still being pursued today.

The Book is clearly what we would now identify as a “process-driven” text—it is the trace of an intensely personal and meditative practice, which hurls us precariously into the disjunctive palimpsests and lacunae of the poet’s thought. The project reflects Mallarmé’s mirror-born(e) vocation of atheist mysticism, in which ultra-rarified abstraction and the written detritus of daily life are both pushed to a literally unthinkable crisis of mutual negation, arrested in the process of emerging into a thought which continues to evade us even as we read its relics. Mallarmé is revealed here exploring territory uncannily similar to that of psychoanalysis a generation later, presenting a psychological terrain composed not of memory and self-identity but of rupture, erasure, and forgetting, in which the distinctions between words, thoughts, and physical marks are revealed as illusory. This all-important aspect of the project is rendered manifest due to Gorelick’s decision, unlike previous French editors, to present the work as close as possible to its intended graphic form: as visual poetry formatted within a page-as-field, like his seminal poem A Toss of the Dice Will Never Abolish Chance, whose roots in the linguistic adventures of The Book are now made clear.

Unlike the latter poem, whose spatial unfolding is impelled by a lyric impulse, The Book refuses to cohere; like the unconscious, it is a centerless mélange in which snatches of free verse, mathematical equations, working manuscripts of correspondence, diagrams, and other relics of mental life all mingle without hierarchy or order, sometimes merged indiscriminately on a single page. Nor is the poem’s logic any more linear than the unconscious: verses often constellate and clump spatially in isolated islands separated by vast seas of white, vying simultaneously for the reader’s eye; they are connected or divided by drawn lines, partitions, and enigmatic diagrams with numerological import. The texts are riddled with crossings-out, words and formulations rejected yet legible; while explained in part by Mallarmé’s decision to retain these drafts rather than produce fair-copies, it is clear that this is not a mere consequence of the project’s unfinished state. The resonances with his poetics and metaphysics of absence are clear, as is the ludic intentionality within his playfulness, which often attains a subtle but stunning poetics of erasure and re-framing:

We follow the most intimate action of the poet’s thought as he seeks through and beyond language—breaking off in the middle of words, leaping to another sector of the page, scattering disconnected letters and enigmatic sequences of lone punctuation, not so much expressing ideas as repelling off them—yet he remains definitively removed from us. The lyric positivist self, the “Stéphane you have known,” has been erased in its own movement before our eyes.

It is immediately striking here how Mallarmé’s practice foreshadowed the goals of Surrealist automatic writing a generation later, but his process produces results that are infinitely more disconcerting, both in their form and implications—less in line with the illogical but syntactically fluid logorrhea of Breton’s, Eluard’s, and Aragon’s experiments than with Artaud’s savage and jagged pictographic journals published posthumously as 50 Drawings to Murder Magic. If Mallarmé’s project addresses the same psychological territory as the Surrealists, his emphasis on discontinuity and fragmentation, along with the visual and lettristic poetics, are closer to much more recent anglophone Otherstream work, as exemplified for instance in Jake Berry’s Brambu Drezi.

What we have here is not technically The Book itself, but at most its score or its elements—at the least, a quasi-legible relic of its erased possibility. Consistent with the project’s radical refusal of closure, the manuscript consists of unbound pages which were to be performed together in hundreds of combinations, according to aleatory and numerological determinants. Each performance would be given to an intimate, carefully-counted proportion of invited guests to paying audience, each of whom would be offered corresponding books of that session’s particular combination of texts. This recombinatory method situates The Book’s individual “poems” analogously to letters in an alphabet—without or beneath or prior to meaning, they are nonetheless the material whose iterability will allow meaning to be performed, a Kabbalistic mode of thought to which the insistent arithmetical passages also seem to relate (“writers otherwise than / the majority, than the poor sorcerers / brothers, otherwise than Kabbalists” p. 13). Many of these constituent texts consist in turn of obsessive plans and calculations for the performance itself: a poetics of self-reflection as annihilation? Or simply adjuncts, notes-to-self mixed in among scores?

The Book renders answers impossible and irrelevant. As Mallarmé so famously said, “everything in the world exists in order to end up as a book,” and remarkably little of the content here corresponds to any commonly accepted understanding of “poetry” of his time; rather, it underscores how false and reductive is the habitual stereotype of Mallarmé and the Symbolist network as “idealist” thinkers constructing ivory towers. Many of those scraps which are still “poetic” in affect tend to address the poet’s cognitive and conceptual process:

Many others deal with social and economic injustice, reminding us that Mallarmé published in numerous anarchist and socialist journals: 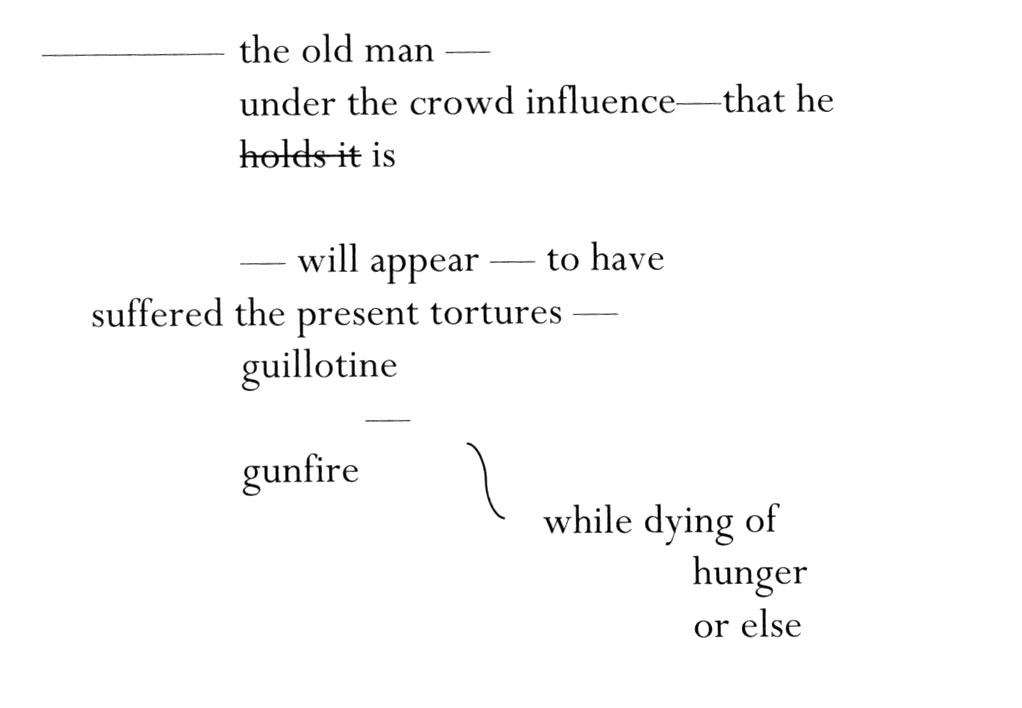 The bulk of The Book, however, is devoted to ephemera relating to the practical, “extra-poetic” dimensions of Mallarmé’s intellectual practice: worked and re-worked manuscripts of letters and reviews, cryptic notes referring to long-lost incidents, and dozens of computations relating to the guest-lists, timing, iterations of potential performances, and the pagination, distribution, and manifestations of the book. If the vague and ambiguous descriptions of The Book have long evoked a kind of idealist projection of totality, what we find here instead is a re-affirmation of materiality: The Book is a matter of logistics, production, situation, and dissemination.

As one can expect from Exact Change, the volume is elegantly designed and well-produced. Gorelick’s introduction is attentive and articulate, though one could wish for more extensive and detailed discussion of the history of the project (insofar as it can be reconstructed) during the thirty years between its conception and Mallarmé’s death, of the physical form of the manuscript as left to us, and of the evidence regarding the nature and modes of The Book’s proposed performance and publication. The relatively cursory treatment of these things is likely a reflection of the kind of practical restraints reflected in the equations that pepper its pages, but this very fact also underscores the importance of those material and historical concerns to the text being introduced. This context would have been more helpful than the survey of reactions to The Book by Blanchot and Derrida, as cogent and influential as those studies have been.

The Book as finally revealed to us both belies and exceeds the myths of textual otherness and mystical quest that have surrounded it from the start. As is appropriate for this enigmatic and paradoxical writer, it turns out to be both his most intimate and his least accessible work. Just as his disciple Jarry pursued the Symbolist project past the point of its own implosion in the form of Ubu’s ‘pataphysics, Mallarmé in this most hermetic of undertakings pursued his poetic vocation to the point of dissolution, and sketched out not only an impressionistic glimpse of a mind frantic to think past its own possibility, but an uncannily prescient map of the poetic adventures of the coming century, a presage invisible to us until now.