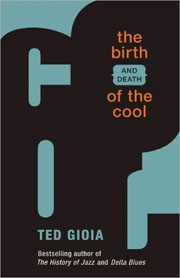 In The Birth and Death of the Cool, Ted Gioia claims that the social aesthetic of “cool” is going out of style. Gioia, primarily a jazz historian and cultural observer, brings his experience to this theory. The book is conversational and simple, but packed with history and business statistics. It’s not overly music-heavy or technical, but based largely on the author’s careful observations of the culture we can all see.

Gioia says in the introduction that his original intention was to define the cool and trace it through history and society. During this process, however, he identified a major cultural shift away from cool in the last few years, one that he predicts will continue until the formerly ruling aesthetic is completely dead. He covers both the cool and its decline adeptly, entertaining the audience while educating them on jazz history, cultural studies, and consumer profiling.

The book is structured in semi-chronological themed segments that progress logically. Gioia first attempts to define cool, describing its modern and historical implications, then takes us through its history before detailing its decline and predicting what will come next. His “cool” comes mostly from jazz culture—introduced by Bix Beiderbecke, Lester Young, and Miles Davis—but is heavily influenced by other popular media figures, including the Beats, Bugs Bunny, and James Dean. It’s a lifestyle and a fashion style, a pretense that we enact with sarcasm and nonchalance. It’s what ads use to draw in customers, and what every fashion and entertainment company claims they can provide.

This very commandeering of cool to manipulate consumers, Gioia argues, has led to its downfall. Customers raised in the system of purchasing cool have become disillusioned and increasingly wary of advertising; they no longer believe that they can be cool for the price of a new shirt. Corporations are beginning to realize that the public’s attention can no longer be bought, and must turn to the word-of-mouth paradigms that have led companies like Amazon and Google to flourish.

Gioia writes extensively on the effects of this post-cooling of society. The same generation that is unimpressed by the cool is shopping at Whole Foods, listening to folk music, and voting for Obama (Gioia’s pick for the most nerdy president in recent history). With the comeback of an honest and straightforward sensibility, students are openly applying themselves in school, natural foods and healthy lifestyles are on the rise, and consumers are striving to be individuals rather than following the pack.

Besides providing an interesting history of the cool and a keen observation of modern culture, Gioia also warns the reader about the negative ways in which our society is changing. As we lose our pretense, he argues, we also give up our basic politeness. Road rage and angry rappers have become commonplace, political debates engage in aggressive ugliness, and “keeping your cool” is no longer a social virtue.

After reading Gioia’s book, it’s easy to believe that a change of cultural priorities could cause such a large shift in behavior. Whether you ultimately agree with Gioia or not, The Birth and Death of the Coolis a fascinating look at modern culture.