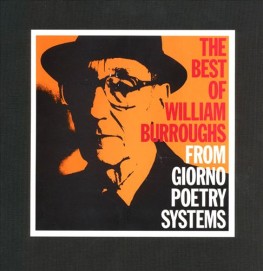 When William Burroughs died last year at the age of eighty-three, the world lost not only a great writer but a great voice—literally. His unmistakable twang seemed like an instrument, some kind of alien device that might help us interpret the words he'd written, and he played it with a narcotic drawl (to ease the inevitable moments of panic and terror) and a ham's passion for acting out weird characters. Leave it to John Giorno to immortalize that multifaceted voice on this astoundingly comprehensive box set. Giorno has been underappreciated in his lifelong quest to infect the world with words via technology—he's the guy who invented "Dial-A Poem" in 1968—but perhaps by sharing full billing on the cover of this box he'll get some belated recognition. At any rate, because he had the unique perspective of being Burroughs's friend (he lived in "The Bunker" with Burroughs in NYC) and of having recorded so much of his work, Giorno's the perfect person to have put this set together; from begin to fin you can tell he did it for love, not money.

The obligatory booklet that comes with the box includes a wide range of material. Giorno's chronology offers an intimate account of Burroughs's development into a spoken-word icon: "He'd get drunk (vodka and Coca Cola) and stoned (marijuana) before every performance and then walk out onstage cold grey and focused and give a magnificent performance." Newsweek's David Gates's more sober introduction considers Burroughs in the tradition of Twain and Whitman, concluding "Nobody's ever written anything quite like these surreal, comically sinister character sketches, sci-fi tall tales, junkie folklore, paranoid jeremiads and cranky home truths. And nobody's ever going to read them better." Sprinkled throughout are excerpts from Burroughs's own writing, and the occasional bit of fan boy fun, like a list of what went into his coffin (e.g., "HEROIN. Before the funeral service, Grant Hart slipped a small white paper jacket into William's pocket. 'Nobody's going to bust him' said Grant.") and notes Burroughs took at a Giorno Poetry Systems Board of Directors meeting ("Are we prepared to take the necessary measures? Some of us are. The other Board members will not be informed of the necessary measures.") (Aside from Burroughs and Giorno, the board included John Cage, Allen Ginsberg, and Anne Waldman. The accompanying photograph suggests a lot of paperwork got done that day.) And of course between the big booklet and the little jewel-case booklets there are enough photographs to fill a . . . well, a box set retrospective of a legendary writer.

But fancy packaging aside, the recordings themselves are what we came for, and they are indeed the best of Burroughs. Giorno was able to choose from a "vast archive" of readings, and organizes his selections roughly chronologically by the piece, not the reading of it. Thus, over four discs, we go from a pre-Naked Lunch incarnation of Doc Benway to excerpts from his feline manifesto The Cat Inside. There's plenty of stuff that's not from his books, though, and some of these strays are Burroughs at his most acerbic—the hilarious lecture "Sexual Conditioning," for instance, contains passages like "Admittedly, homosexuals can be conditioned to react sexually toward women—or to an old boot, for that matter. In fact, both homosexual and heterosexual experimental subjects have been conditioned to react sexually to a boot. To an old boot. You can save a lot of money that way." And the set also includes (on the last disc) the 1981 Industrial Records release of Nothing Here Now But the Recordings, complete with liner notes by Genesis P. Orridge of Throbbing Gristle and Psychic TV fame. This album showcases Burroughs's tape experiments, mostly from the '60s and many applying the cut-up technique he derived from Brion Gysin to the sound medium. Like the rest of Burroughs's work, this noisy stuff isn't for everyone, but it does display his aesthetic in progress and in process, giving us further reason to consider his question "How random is random?"

William Burroughs probably knows the answer to that question for sure now, wherever he is. For those of us still trapped in the interzone, these recordings lead us toward the clues he left us, like a good agent, clues that point to the ultimate truth he knew: "Nothing is true. Everything is permitted."