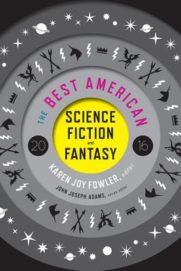 Relatively new to the “Best American” anthologies, The Best American Science Fiction and Fantasy 2016 fills a gap of sorts in this distinguished series. This year’s guest editor is Karen Joy Fowler, who has written both genre fiction and work that has escaped the designation of “genre,” such as The Jane Austen Book Club. Her wonderful introduction to this anthology shows that she is living in the science fictional present, where all sorts of fantastical and inspiring stories wind up in the news. The book’s foreword, by series editor John Joseph Adams, is also fascinating, as he ventures definitions of science fiction and fantasy—genres where debates about definitions abound. In short, he suggests that Science Fiction asks “what if” and Fantasy is where the “impossible happens.” Fantasy can have magic wielders, for example; science, though, might make the impossible a reality someday.

For this series, the guest editor picks twenty stories, ten fantasy and ten science fiction, from a group of eighty (half and half also) selected by Adams and colleagues. The sixty stories not selected for inclusion are listed in a Notable Stories section at the end of the book. The sources of these stories are wide ranging, with work from some major non-genre magazines selected.

This anthology showcases some of the best writing in the field from 2015. Readers of speculative fiction will recognize some of the authors included in this volume—such as Kelly Link, Sofia Samatar, and Ted Chiang—but the anthology is diverse and includes some uncommon names as well. There are not many entries which require a great deal of world building, for space reasons no doubt; likewise, there are few technical stories for which the reader would need to understand jargon. Overall, the stories are highly accessible, with interesting ideas privileged over adventure.

Perhaps most notably, there is not a great deal of escapism here. Some say that people read genre fiction to escape reality, but this volume suggests that one might be escaping from reality by not reading. Some of these futures might be upon us someday soon. Some seem like they are already here. The stories are topical, dealing with modern warfare, technological innovation, and contemporary social issues. Not everything is for everybody, as can be expected with any anthology, but those who don’t want to venture too far into fantastical places might enjoy the wide-ranging exposure to genre writing this volume offers. One wants more when it is over—and fortunately, places to look for it are recommended.