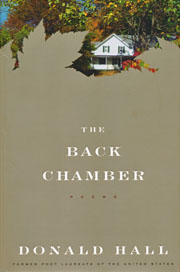 This is Donald Hall’s sixteenth collection of poems in six decades, although he has also published books of prose—including three memoirs—and edited several anthologies. A graduate of both Harvard and Oxford, Hall’s education prepared him well for a notable career as a poet, and that he has had. Born in 1928, he has also been an editor and interviewer (most notably at Paris Review) as well as an interviewee, questioned by Peter Stitt for Paris Review in 1991, and more recently by Garrison Keillor on Minnesota Public Radio, sitting beside Robert Bly, Hall’s fellow poet and lifelong friend. Hall has also been an academic, the longest stint at the University of Michigan, where he met Jane Kenyon, who became one of his most gifted students and his future wife.

Hall’s poems resonate with joy and sadness, and also detached self-skewering—for example, as a widower in the decade and a half since Kenyon’s death from leukemia, he has produced rueful social commentary in “Ric’s Progress,” a long poem in free verse worked over for twenty-five years. This is a near-ribald narrative of a protaganist and his succession of significant others, one with the improbable name of Twosie, and finally Molly with whom he is monogamous and happy, although no longer young. Excessive alcohol consumption, bad tempers, vandalism, adultery, and other unfortunate business are all motifs of “Ric’s Progress,” as can be seen in these four illustrative lines:

For some, adultery
peppered the casserole cookery of middle youth.
Or at least it plotted the day; or at least its danger
And sport attested: We are alive.

While this long poem reads well, neither Ric nor any of his successive amours evoke much empathy. Hall is much better in shorter poems. For example, “River” (originally published in The New Yorker) is a lucid ghazal fraught in tercets of terrible beauty:

In a dream this August night in St. Petersburg,
I see the years lapse like Cyrillic letters
into the calm and receptive waters of the Neva.

When I was twelve years old in Connecticut,
helmeted soldiers sieging in acres of snow
surrounded Leningrad and the implacable Neva.

They warmed their hands and jackbooted feet
over the golden ashes of Catherine’s Palace
inland from the former St. Petersburg’s Neva.

Home from eighth grade I read in Life how trucks
slipped over frozen Lake Ladoga into the city
and starvation ebbed by the enduring Neva.

Poems such as this do not spring from mere reading, but from the inscape of traveling and from imbibing, then distilling, one’s own life in perspective.

The title poem, describing a room in his ancestors’ New Hampshire farmhouse where the poet has lived year-long for four decades, has a special vibrancy, the syntax seemingly effortless—although from Hall’s admitted work habits, we know that much revision and tinkering go into a poem long after a first draft is achieved. Such torque is no doubt evident in the first strophe of “The Back Chamber”:

Here is the house’s genius: pram and bedstead,
Heart-shaped Valentine candy
Boxes, oil lamps, a captain’s chair,
And Ben Keneston’s underwear,
A century ago
Folded away in case it came in handy,
By prudent family dead.

Finally, if the poet can recover from grief and other misfortunes long enough to laugh at himself, he also pokes fun at conventions. For instance, does one have to be “certified” in order to be a good poet? Here is the entirety of “Creative Writing”:

Translating Virgil, eighty lines a day,
Keats never did pick up his MFA.

The Back Chamber has unexpected insights, charms, droll observations, self-mockery, and well-earned wisdom. Hall is a serious writer, yes, but he has learned not to take himself too seriously—a view many a younger artist might embrace.