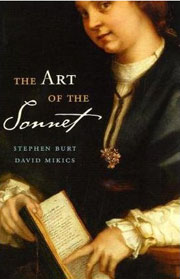 Stephen Burt and David Mikics, both English professors (Burt at Harvard, Mikics at the University of Houston), have here created a most ambitious literary compendium, providing a brief history of this form of poetry before launching full steam into their main presentation: one hundred sonnets, each with an evaluative essay by either professor. The range is wide and mostly from poets writing in English, from Thomas Wyatt’s 1557 sonnet “Whoso list to hunt” to D. A. Powell’s “corydon & alexis, redux” from 2009.

Burt and Mikics have chosen highly intriguing examples in the sonnet’s long history, and the essays are generally urbane and highly informative. Amidst poets you’ve probably never heard of there are also many recognizable names. The sonnets that follow are usually only fourteen lines, the traditional length, as is Shakespeare’s “Sonnet 2” from 1609, seven years before his death. Look for the volta, or turn, about line eight or nine:

When forty winters shall besiege thy brow
And dig deep trenches in thy beauty’s field,
Thy youth’s proud livery, so gazed on now,
Will be a tatter’d weed of small worth held:
Then being asked where all thy beauty lies,
Where all the treasury of thy lusty days,
To say within thine own deep sunken eyes,
Were an all-eating shame, and thriftless praise.
How much more praise deserv’d thy beauty’s use
If thou could’st answer, “This fair child of mine
Shall sum my count, and make my old excuse,”
Proving his beauty by succession thine.
This were to be new made when thou art old,
And see thy blood warm when thou feel’st it cold.

Mikics explains why this poet is unique: “Shakespeare revolutionized the sonnet in several ways. The Italian poets divided their sonnets into two uneven units, the eight-line octave followed by the six-line sestet. Shakespeare built his sonnets differently, as three block-like quatrains (four-line units) followed by a couplet.” Both professors contribute revealing, edifying essays around their choices; what might be called now the “back story” inhabits each sonnet, each poet’s life, many with facts not widely known about the circumstances during composition.

Charlotte Smith’s 1798 sonnet “Huge vapours brood above the clifted shore” depicts her fears about the sea, about political upheaval in France, and her own unhappy marriage (she and her husband had been imprisoned for debt). Her sonnet was also borne of her subsequent ability to get out of debt by becoming a very successful novelist and poet. How many could do that now?

Huge vapours brood above the clifted shore,
Night o’er the ocean settles, dark and mute,
Save where is heard the repercussive roar
of drowsy billows, on the rugged foot . . .

Smith was not well known by the general populace after her death, but that her voice endures—if only for a single poem in this book—is testament that she took the events of her own time seriously. A contemporary of Jane Austen, Smith was well aware of the vagaries of time, love, and fortune: all can vanish just as one beholds them. Other English poets of this era—William Wordsworth, John Keats, Percy Bysshe Shelley, and Samuel Taylor Coleridge—are well represented here, too. Burt and Mikics each contribute intriguing explications of their most famous sonnets, such as Shelley’s “England in 1819” (which his sister found long after his death) and, earlier, “Ozymandias.”

One would be remiss in not mentioning Elizabeth Barrett’s lovely sonnet on learning that her friend and fellow poet, Robert Browning, loved her—as he told her in a letter. “Sonnets from the Portuguese 28” and Burt’s accompanying essay give the reader a good sense of Barrett’s milieu and emotions, once she realized she did not have to obey her father’s insistence that none of his children marry. She eloped to Italy with Browning, eventually bore a son, and had sixteen good years of marriage before dying in 1861. The emotions gleaned in her sonnet should give heart to those so tested or fraught with love’s upheaval in our own or any era.

Another poet, devastated by what he’d seen in the American Civil War and by his own ill health, is Henry Timrod. Born in South Carolina in 1828, well educated but tubercular and frail, he wrote movingly two years after the Confederate defeat. His sonnet “I know not why, but all this weary day” is a strong testament to life’s essential unfairness. He died shortly after writing it.

In the early twentieth century, sonneteers such as Robert Frost, Edna St. Vincent Millay, and Thomas Hardy receive appropriate representation here. One poet relatively unknown because of his short life was Trumbull Stickney, whose 1905 effort “Mt. Lykaion” may well have been a response to Keats’s “On First Seeing The Elgin Marbles,” as Mikics explains. Here are Stickney’s opening lines:

Alone on Lykaion since man hath been
Stand on the height two columns, where at rest
Two eagles hewn of gold sit looking East
Forever; and the sun goes up between.

As Mikics posits, Stickney may well have been suffering from a brain tumor that caused faintness and partial blindness; he died at thirty. Knowing that Keats had defied the gods by trammeling on the venerated mountain as well, Stickney’s concluding couplet is forceful:

Suck out my heart, and on this awful ground
The great wind kill my little shell with sound.

The Art of the Sonnet has many examples of poets writing in great difficulty—Ivor Gurney, Hart Crane, and Elinor Wylie stand out. Others such as W. H. Auden, Edward Arlington Robinson, Yvor Winters, and Wallace Stevens wrote brilliant sonnets and other forms of verse without undue personal stress, apparently, and were deservedly lauded. Here is what Stevens wrote on a postcard to Harriet Monroe, Poetry’s founding editor, under the title “Nomad Exquisite.” He sent it to Monroe from Florida in 1923 while on a visit there:

As the immense dew of Florida
Brings forth
The big-finned palm
And green vine angering for life,

As the immense dew of Florida
Brings forth hymn and hymn
From the beholder,
Beholding all these green sides
And gold sides of green sides,

And blessed mornings,
Meet for the eye of the young alligator,
And lightning colors
So, in me, come flinging
Forms, flames, and the flakes of flames.

Among more recent poets represented are Louise Bogan, James K. Baxter (from New Zealand), Elizabeth Bishop, A. D. Hope (Australian), Tony Harrison (English), Rosanna Warren, and the playful, incisive Alison Brackenbury with her 2004 “Homework. Write A Sonnet. About Love?” She reveals a wise, perceptive heart and a perspicacious sense of humor. Of course, many of these poets, as Burt and Mikics point out, do not write traditional sonnets. Paul Muldoon, a poet from Northern Ireland who has lived and taught for some years in the U.S., contributes a fine depiction from his volume Horse Latitudes about urban chafing in the era of the Iraq War. His sonnet is titled “Starlings, Broad Street, Trenton, 2003.” It’s not conventional, but well worth reading.

If you want to know about the sonnet, how it came about and has evolved over the last eight centuries, this elegant book will be invaluable many times over.