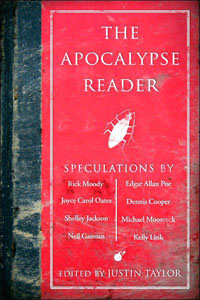 Apocalyptic thought projects fears, hopes, and grudges onto a cataclysmic fantasy. A human seer, in such scenarios, casts his subjective location onto a cosmic canvas, with results that act as metaphors for earthly loss, political foibles, laments for absent justice, egotistic daydreams, or expressions of transcendent experience.

Sampling all of these subgenres in its broad survey of short fiction,The Apocalypse Reader features Shelley Jackson’s harrowing “The Hook,” about survivors from a pestilence-ravished world living near a supermarket-cum-morgue, and Neil Gaiman’s “When We Went to See the End of the World,” wherein a boy of eleven is taken on a family picnic to the spot where clashing armies pour, slower than molasses, from holes rent in the ground and the sky. Both stories convey, under the trappings of their eerie details, a poignant sense of childhood’s end and a stark vision of the adult world.

In Nathaniel Hawthorne’s “Earth’s Holocaust,” the world gathers to haul all sources of temptation and vice into a bonfire, an essentially futile act that demonstrates smug stupidity rather than any commitment to virtue. Dennis Cooper’s contribution turns a seeming moral vacuum into an echo chamber as a dialogue between two disaffected teens fumbling around for dope and sex becomes a discussion of Bin Laden and an indictment of the reader for participation in society’s choking obsessions with youth and death.

Taking a page from “the cream of the foil hat crowd,” Steve Aylett’s “Gigantic” imagines alien ships descending over the world’s cities. “Fifteen miles wide, these immense overshadow machines rumbled across the sky like a coffin lid drawing slowly shut,” an image familiar from too many B movies—but instead of disintegration beams from swarms of attack craft, what comes out of these ships is a macabre rain of corpses, thudding down on the homes of the guilty:

Sixty-eight forgotten pensioners buried in a mass grave in 1995 were dumped over the Chicago social services. Hundreds of blacks murdered in police cells hit the roof of Scotland Yard. Thousands of slaughtered East Timorese were dumped over the Assembly building in Jakarta. Thousands killed in test bombings at Hiroshima and Nagasaki began raining over the Pentagon. Thousands tortured to death showered Abuja.

As satisfying as such narratives of retribution are, so too are those situations in which one imagines oneself playing a starring role in the finale of reality itself. The narrator of Jeff Goldberg’s “These Zombies are Not a Metaphor,” for example, finds that regardless of whatever dull positions he held in life, he has precisely “the proper mental fortification” to deal with the world as it crashes and burns. If life sometimes seems random and meaningless, the apocalyptic event gives it a clear purpose and value, the culmination of—literally—everything.

Amid all the bravado and grotesqueries of these pages, all the bruises and bloody teeth spit into palms, all the golf swings practiced with severed dog paws and meth-addicted superheroes coping with rising floodwaters, there are also stories that detail the most private apocalypse, a personal vision of death. Likewise, in a collection spanning comedy, satire, and horror, there are also examples of the sublime, including a haunting “diptych” by Joyce Carol Oates that masterfully interweaves the sterile prose of forensic pathology textbooks with the meditations of a severed body amid the growing weeds and fluttering butterflies. Here “the language of bones” scrapes and chatters against the human voice of a soundless scream, and terror erupts into ecstasy via “a swarm of iridescent-glinting wings” and the author’s razor-edged, crystalline prose. Such mystical transformation of the banal into the visionary is at the heart of the apocalyptic impulse, to which this volume offers fearful and marvelous testimony.