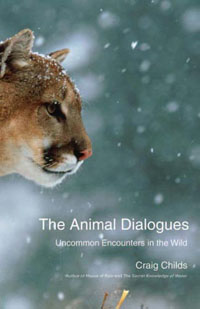 Roughly a quarter of the way into Craig Childs’s new collection of essays, the author comes face to face with a mountain lion in the Blue Range of Arizona. Childs is armed only with a small knife and the knowledge that mountain lions usually attack from the rear. As the lion stares him down, slowly angling to the side to get behind him, Childs’s instinct urges him to turn and run, a move his rational self knows will result in an attack. In the end, Childs holds his ground and the lion, not knowing what to make of him, eventually withdraws.

The other wildlife encounters that fill The Animal Dialogues are just as memorable. In the Sonora Desert, Childs serenades a coyote with a flute. Flying alongside a bald eagle in Alaska, he imagines what it would be like to step outside the plane and soar next to the bird. In the Utah desert, he happens upon a small canyon with ravens perched along the walls, celebrating their recent kill of an owl. On a shoreline in Baja, California, he watches a blue shark purposely beach itself in an apparent suicide.

Currently a writer and commentator for National Public Radio’s Morning Edition, Childs has at various times been a jazz musician, journalist, gas station attendant, beer bottler, college instructor, and river guide. For a number of years, he had no official residence or phone number, sleeping in the back of his truck, a tipi, or under the stars. His first books were written in bars, laundromats, and libraries. He is drawn to the wilderness, often venturing out alone, on foot and unarmed.

Despite these mild eccentricities, Childs brings a refreshing humility and humor to his journeys. In one essay, he silently stalks a traveling companion through the forest, only to learn his prey is a jaguar. A cat recruited to rid Childs’s tipi of mice decides hunting outside is more enjoyable. When a confrontation with a pronghorn sheep ends with the animal dismissing Childs as a threat and walking away, he is embarrassed.

His prose is simple, sparse, and often magical. Through his eyes, we see a raven as “a sorcerer wearing sleek black robes,” a hummingbird’s “throat the color of fresh raspberries, its back iridescent green like a metallic scarab.” His writing moves effortlessly between the scientific and the lyrical, describing the chemical make-up of rattlesnake venom before comparing the snake’s stare to “the steely gaze of Shiva, the destroyer God.”

Childs is critical of human impact on animal habitats, but subtly so, choosing the World Trade Center site and a military bombing range in Arizona as the settings for two essays. This skillful use of place allows Childs to avoid the preachy tone common in contemporary nature writing. Unlike many naturalists, he embraces anthropomorphism, citing the common desire among all living things to flourish. “Beyond that,” he notes, “our differences are quibbles.”

Ultimately, The Animal Dialogues is a celebration of the resiliency of life. Childs mourns for the various species being wiped out, but is buoyed by the fact that new species will eventually arise to take their place, offering new aspects of grace and beauty.