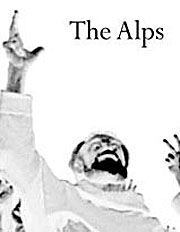 Brandon Shimoda’s The Alps begins with a single line on an otherwise blank page: “HOW will I ever find the scenery.” This question reverberates throughout the book for both the poet and the reader as the physical and emotional landscape of the Alps moves in and out of focus. Its first mention is emblematic of this flux:

Into a mouth, eye-in-the-broom, wet with spirit, we call the mass
The Alps, I have placed the record of your death on my arms
To my shoulders in reaching through the cross of roots
Upended sky, profane and bled, youth’s
Unbodied land as the land is destroyed
With white ears, yet perfect, at home

Whose death, we wonder. What is the cross of roots? How will we ever find the context? Shimoda’s work encourages these questions as we venture into his strange landscapes:

none belong
to us, the lines
in the landscape hanging
our hunger, the flowers
growing toward the tongues

There’s a meditative feel to Shimoda’s work, a wandering in the lines, yet a certain precision unfolds in his descriptions. When we reach a poem titled “Eismeer,” we seem at last to have found the Alps in Switzerland: “One fracture of the glacier rends // A crown so easily won // Cliffs // Cheat, small edelweiss.” But it’s more accurate to say Shimoda suspends us at the intersection of language and landscape. A series of poems, all titled “The Alps,” captures Shimoda’s unique way of writing experience, memory, and the environment:

ulterior to the tonal mountain

While the Swiss Alps are natural monuments, Shimoda’s poems attempt to capture their majesty in miniature. His language moves across great distances (both semantic and linguistic) to see—and show us—one possible way to “find the scenery.”

In the middle section of The Alps, Shimoda presents a series of poems that interact with a blank box in the middle of the page. A clue to these empty boxes might be the picture of two kids, dressed in costume, which opens the first section of The Alps. The kids are perhaps the poet and a sibling; maybe the poet spent some of his childhood in Switzerland. The blank boxes, then, might be representative of old photos, and indeed, many of the poems beneath the empty boxes read like meditations on pictures. The first quite simply and beautifully reads: “A circle of birds on a pond / of stone. Fence of water // Broken.” It seems that Shimoda is playing with the form of the caption, upending our expectations:

in negative salt
the entrance to a cave

While some of the poems in this section describe an image, many force us to imagine how to translate words into an image. Shimoda even uses blank space beautifully, letting it fill a painterly function in his drama of description.

an appearance of utter confusion, but we soon reached a position
where the mechanical conditions of the glacier revealed themselves,
and where we might learn, had we not known it before, that
confusion is merely the unknown intermixture of laws, and
becomes order and beauty when we rise to their comprehension

This is an excellent way to describe Shimoda’s work and its “mechanical conditions,” though those conditions are often left mysterious and compelling. For example, there’s a poem about the atomic bomb test and the speaker’s grandfather, who bit off his tongue and spit it out a window on a train carrying him to the “high flaying desert”—perhaps an internment camp. These two details are surrounded by other details that construct and deconstruct the narrative simultaneously.

This occurs most radically in a thirteen-page poem titled “The Place Thereof Shall Know It No More,” which feels like an expedition into the mind of Wallace Stevens’ “Snow Man.” Stevens’s poem end with “the listener, who listens in the snow, / And, nothing himself, beholds / Nothing that is not there and the nothing that is.” Likewise, Shimoda seems to listen in the snow-peaked Alps and behold the blank nothingness that underlies all things. At the same time, he is able to capture, if fleetingly and fragmentarily, the everything that is there. And he renders this everything in his own fire-woven language: “The song that comes / at great expense The song / that does not come.”