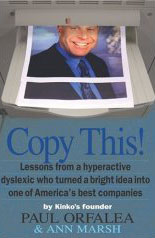 Academic life was not easy for Paul Orfalea.  As a hyperactive, dyslexic child growing up in the 1950s and '60s, Orfalea's future looked dim.  His education was plagued with one disappointment after another. He flunked two grades and graduated eighth from the bottom of his high school class.

Through strength and support from his family, Orfalea did not let standardized tests and a D average stop him from achieving success. In the early 1970s, a light bulb went on in his head:  Offer a service that people need. In this case, it was a photocopy service for students on the University of California at Santa Barbara campus. That small copy shop was called Kinko's—a nickname he earned for having kinky hair at the time. The business grew to over 1,200 stores in nine countries.

The rise and eventual sale of the successful copy center is chronicled in Orfalea's autobiography, Copy This! (Workman Publishing, $23.95). The book is filled with personal and business anecdotes as well as some interesting opinions, including the author’s take on American education system. Neither a liberal nor conservative, Orfalea has a unique perspective on the current state of education and the nation.

Robert Nebel: How do you feel about the No Child Left Behind initiative?

RN: What would you propose instead of No Child Left Behind?

RN: Would local control be the green light for certain states to discriminate thereby creating an educational apartheid system?

PO: At Kinko’s, we had that argument for centralization. Who’s to say that better parents involved in their children’s education won’t make better decisions than folks who are connected to Washington?

RN: Would you be in favor of vouchers?

PO: I don’t know how I feel about vouchers—I think that conflicts with separation of church and state. I don’t know how I would feel about tax dollars going to them.  When I was in school, we had one vice principal for 3,000 students.  It seemed that his only job was to paddle the shit out of me.  Today, we have six vice principals in a school. Maybe charter schools would be good. We need to get more local control of our schools. We need to get the Washington test-takers out of our schools.

PO: We have education ass-backwards. Ninety percent of students that I have taught do not know that a Senate term is six years long. They are global studies majors! We are producing a bunch of trout. A trout will bite the hook and a few minutes later will bite the same hook. That is how long their memories are.

PO: Kids that are allegedly better students are in an elitist class in first and second grade and then they go to their high schools, they go to their universities and the normal dumb shits like me are down at the bottom. These people go to elitist schools and they replicate their elitist thoughts in the corporations.

They don't trust the people at the lowest levels. I've always been a believer that people go to work to do a good job. We do not need as many rules as we have. I don't understand why it is a federal issue on choice. Why is the federal government giving money to my local police department? Soon we will be addicted to the federal government, and we will not want to support our local police force. I have been a believer (with the founding fathers) that the government that governs best is the government that governs least.

RN: What would you do to better prepare the students?

PO: If I reformed school, I would do two things: We can improve a child's IQ by three percent by teaching them a foreign language by seven-years-old. We shouldn't be waiting until high school when they are neurologically not ready to learn it. Second, we emphasize reading too young. Boys do not have the language skills of little girls. Boys go to school feeling like idiots. We wonder why fifty-six percent of the enrollment at universities is female. I might consider having same-sex education. Boys from day one are pampered and feel good about themselves and then when they go to school, they feel like idiots. I would have exercise in the morning at eight. They clearly learn better after they open up their brain. Why can't we accommodate the brain and not the school?

RN: If you had No Child Left Behind when you were growing up, where would you be now?

PO: You know, I never will spell past a third grader. I would still be in third grade if the government had their way.

RN: In the book, you reveal that you are taking anti-depressants. Do you think that kids with A.D.D., A.D.H.D. or hyperactivity should be taking them?

PO: I was opposed to it. Now my son is taking it and he has better self-image. I take anti-depressants. I focus better. All those voices competing for attention. It's part of life. You take a band-aid to stop bleeding, why not take a pill to stop the pain.

RN: Does it help with your legendary bouts of anger?

RN: As a successful entrepreneur, how do you feel about the president and his business policies?

PO: I think this guy's a dumb shit to be giving tax cuts and then he wants to give more. He's not a conservative.  I don't know what he is.

Click here to purchase Copy This! at your local independent bookstore