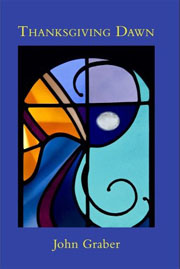 John Graber has traveled a long road to his first collection,Thanksgiving Dawn. After taking his undergraduate degree from St. Olaf’s College in 1968, he entered the Iowa Writers Workshop and studied with many of the bright lights there, including famed mentor Marvin Bell. He subsequently frequented both blue collar and teaching turfs, eventually grounding himself in Stockholm, Wisconsin, near the Mississippi River. He is up-front about his struggles along the way, notably with depression and bi-polar mood disorder. Like younger poets he has scattered many poems in literary magazines, gathering some of these leaves into Thanksgiving Dawn. No doubt he spent years aware of the successes of his Iowa kin, doubting he would ever achieve a book of his own.

The poems in Thanksgiving Dawn are grouped chronologically by decade, from the 1970s to the recent present. The arrangement shows how a poet casts about widely on the way to achieving a vision that is clear, coherent, personal, and intensely felt. His ’70s poems—reflections on nature, love, faith, and war—are best summed up by one title, “The Inverted Physics of the Heart.” In these poems both heart and head are deeply troubled by the darkness inherent in things, by the bewildering beauty of nature, and by the mind’s failure to heal itself or to untrouble love, depicted in “The Gift” as an awkward blue heron.

The poems in the sections that follow allow us to see through the darkness a faith grounded in realism. In lines that are accessible and clear, and in stanzas that sometimes unabashedly build to crescendos, the poems establish the complex metaphorical connections that link self with landscapes at once lovely and cruel, with a mind confounded by its own mazes, and with love, never easy, for real people. In the face of a nameless African boy appearing on a magazine cover, he sees William Blake, “This lamb. This exhausted tiger.” In the middle of the coldest Novembers of the soul Graber still finds thanksgiving and dawn, despite the fact that he remains “standing on the outside, turned upside down / and righted.”

Graber’s poems are unpretentious yet complex, the realizations of an eye alive for the precise detail and hungry for the hints that meaningfully connect the self to others and the world. Faithful to the gnarled issues he dares to confront, he does not shrink from expressing his moral passion and honest impressions. His poems are not exercises or performances; they are crucibles he stirs into meaning. For good reason Marvin Bell calls Thanksgiving Dawn an italicized “necessary.” If over the decades Graber has watched a crowd of poets race to catch up with their careers, he need not try to catch up with the many he’s already passed.