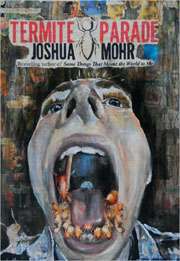 First, the teeth: one second, Derek, Mired’s boyfriend, is carrying an intoxicated Mired up the stairs to their apartment; the next, Mired lies bruised and bloodied at the foot of the stairwell. In his quest for redemption for what he sees as an unforgivable crime, Derek and a broken GPS head to Reno, only to fall prey to a band of loquacious softball players’ vindictive bladders in a passage that calls to mind the absurdity of Kafka and the humor of A Confederacy of Dunces. Mired, meanwhile, abandoned by Derek mid-operation at the dentist, inventories her “Mount Rushmore of Male Failures” while her injuries heal; as she catalogues all the exes who have failed her, she decides to call the one ex that didn’t. And Derek’s twin brother, Frank, the third narrator, an ambitious would-be auteur who yearns to expose humanity as a mob of veiled animals, debates whether or not to tell Mired his brother’s damning secret$mdash;that Derek dropped her on purpose$mdash;and how best to use the revelation for his art.

While the narrators share Mohr’s penchant for dazzling turns of phrase, they are also allowed their own distinct voices: Mired’s despondent ruminations come across as elegiac and resigned; Derek’s chapters burn with a self-pitying rage that threatens to consume him (the titular parade of termites eating Derek’s heart from the inside are his metaphor for the all-pervasive shame); the coldly detached Frank frequently breaks the fourth wall, addressing the reader and christening himself a self-styled “Reliable Eyewitness.” Mohr’s triumvirate of protagonists pine for external validation, some sign that with time they can eventually find the right path. But even youth holds no solace, as Mired bitterly relates: “And the fact that I was relatively young didn’t matter, didn’t hatch the tiniest respite. Why would being young matter if I’d proven time and again too dense to learn from my mistakes?”

Termite Parade flaunts the big burning heart on Mohr’s sleeve, wildly tossing it about to light the way in a relentless search for answers to the unanswerable: How do you forgive the unforgivable? Can you ever really forgive yourself for such a sin? And most importantly, what’s the difference between actual redemption and self-delusion? In the scope of Mohr’s unrestrained vision, Derek and Mired find the only redemption worth attaining is brutal, uncompromising, and never guaranteed.