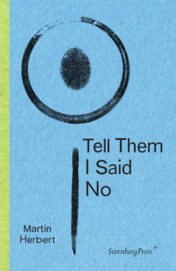 It's not difficult to conceive of the classist, sexist, and racist machinations of the international art world responsible for "art's transmogrification into a backcloth for the power plays of the prosperous," so readers of Tell Them I Said No might expect to find an indictment of those ills in this slim but forthright volume of essays on artistic withdrawal. Sadly, it doesn't quite deliver that indictment, and at times blurs the thin line critic Martin Herbert gives himself to navigate what qualifies as distinguishing "the needs of the artist and the needs of the art world."

Herbert is an admitted regular at august art-insider publication Art Review, and among the achievements of his essays collected here is how they provide a guidebook, a testament to the aspiration for "tools-down nonparticipation" that he posits as "exasperated reaction to the intolerability of the art world, to the limits of political potential, to gender bias, profiteering, the presence of repellant personalities, and neon egos."

Many of the artists Herbert discusses maintain gallery representation and have accepted museum exhibition of their work, so the measure of these artists’ overall reactions to the art world should be taken as a kind of distancing from its less desirable segments. He traces a variety of ways that artists have attempted this distancing, looking at figures such as Agnes Martin, Laurie Parson, and Trisha Donnelly—the last from whom the title of the book is taken (it was her response to a request by the author for an interview). Much of the idealism portrayed here is of the kind these artists desperately struggled to defend out of a sense of reverence for their own and others’ respect for the revelatory nature of the artistic inspirations that drove them, regardless of medium.

Emblematic of this idealism, for instance, is the chapter on Christopher D'Arcangelo, who died much too young, but while he was alive made an art of intervening on institutional art spaces out of a genuine anarchist impulse, suffering more than a few scuffles with authorities for it. Another is Stanley Brouwn, who died this year, his life almost a primary case study in this collection's analysis of willful anonymity's capacity to conjure artistic apotheosis. His series This Way Brouwn, a collection of hand-drawn maps of directions given him by strangers, echo his artistic trajectory out into silence, save for these little artifacts of his movements in the world.

While perhaps never quite achieving a depiction of the logic that defines the "tools down nonparticipation" set out at its beginning, Tell Them I Said No does provide a welcome glimpse into the impulse to resist the neo-liberalization of art in the interest of maintaining human dignity—and to defend the right of art to exist, despite the world. It may help to separate the political potential of this argument from the rest of these framing mechanisms, given the lineage these artists follow out of the historical avant garde. In our culturally revanchist times, Herbert's book, despite its shortcomings and very much because of its attempt to meet worthwhile aspirations, provides hints that there's hope for a better direction.