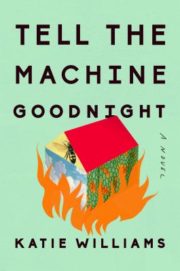 Set in the year 2035, Katie Williams’s Tell the Machine Goodnight envisions a dystopian future, though it’s one that largely resembles our own dystopian present. People clamor to make physical contact with celebrities and offer thousands of dollars for their stray eyelashes or strands of hair. Handheld screens enable users to track the precise movements of friends and lovers. Powerful corporations based in the Bay Area promise increased well-being to the entire American populace—or at least to those who can pay for their services.

But there is one major innovation in the world Williams describes: the Apricity machine, exclusive property of the Apricity Corporation. Its name derived from an archaic word for “the feeling of sun on one’s skin in the winter,” the machine provides clients with customized recommendations to increase their happiness. The process is simple and painless: a “contentment technician” presses a cotton swab against the inside of a client’s cheek, inserts a saliva sample into the machine, and reads out the results. Most people receive recommendations of the bland and wholesome variety (more on this point later): Eat tangerines on a regular basis. Arrange fresh flowers. Put a warm blanket on your bed. Still, they seem to work; the service has a 99.97% approval rating.

This intriguing premise allows Williams to explore a number of weighty philosophical questions: What makes us happy? How can we know? Even if we did know, would this knowledge actually help us become happier? What, if any, are the drawbacks to pursuing happiness? Why might a person choose to forego this pursuit? Told through multiple perspectives, the novel examines how a range of characters address and confront these questions.

The central figure is a contentment technician named Pearl, chosen for her position because she possesses—so her boss tells her—“an aura of wooly contentment, like you have a blanket draped over your head.” Phlegmatic disposition notwithstanding, Pearl is deeply worried about her son Rhett, a thoughtful sixteen-year-old recovering from a severe eating disorder. In one section of narration, Rhett refers in passing to Ursula K. Le Guin’s classic short story “The Ones Who Walk Away from Omelas,” in which the ecstatic happiness of an entire community is founded upon the horrific suffering of a single child. The allusion is apropos, since Rhett himself displays a powerful inclination to resist the culture of happiness maximization around him, refusing his mother’s requests to sit for the Apricity machine. In the terms of another dystopian cultural touchstone, he is the kind of kid who would take the red pill.

A number of the novel’s most compelling storylines explore the relationship between individual happiness and social harmony. One chapter focuses on Pearl’s boss Carter, whose standard contentment plan features such platitudes of happiness maximization as “Adopt a dog” and “Smile at your wife.” One day, however, trying an updated machine, he receives a new and surprising result: “Remove all chairs from your office except your own.” This recommendation gives Carter free rein to act on his inherent desire for dominance, and he soon discovers how much he enjoys the confusion and humiliation of his chair-less subordinates. Relatedly, we learn that the standard Apricity machines redact “violent or illegal actions,” replacing them with asterisks. After Pearl swabs Rhett’s cheek in secret and runs his sample through the machine, she finds to her dismay that his contentment plans consists of a single asterisk, prompting her and readers alike to wonder what perverse or destructive desires are hiding behind this inscrutable punctuation mark.

Williams has created a world rich with narrative possibilities, but some of these are not pursued as fully as they might have been. Carter’s experiments with the modified machine are the focus of one early chapter, after which point the novel essentially abandons his story, despite the important questions it has raised about how this culture handles those who derive happiness from exerting power over others. Another chapter is narrated by Rhett’s stepmother Val, who works as a “freelance namer,” helping companies determine what their products should be called. Tied with Rhett for the book’s most interesting character, Val has a traumatic, disturbing past about which she refuses to speak, and her narration is punctuated by fascinating observations about the histories of words (including “stepmother,” “mask,” “cruel,” and “machine”). But the novel doesn’t give her nearly the attention she deserves. We also don’t hear much about the production of Apricity machines, and the lack of detail on this subject feels like a missed opportunity, since attending to the chain of production might have allowed Williams to investigate further how fulfillment for some is founded upon the exploitation of others.

Another word root relevant to Williams’ novel is that of “happiness” itself, which comes from the Germanic “hap,” meaning “chance” or “fate.” Implicitly, the novel invokes this linguistic history by raising questions about the extent to which happiness truly is a matter of individual control, even in a culture saturated with technological devices meant to facilitate its attainment. On the one hand, some of Williams’ characters simply seem fated to enjoy more happiness than others. On the other hand, the ones on the road to happiness may not be those we would initially expect. At one point, trying to track down an Apricity machine, Rhett thinks that, if he’s lucky, one of Pearl’s will be stored in the closet. Upon finding the machine just where he had hoped, Rhett thinks, “it turns out that I am lucky.”