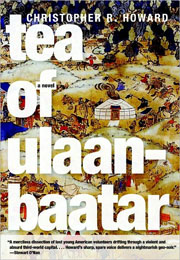 Christopher Howard’s debut novel, Tea in Ulaanbaatar, begins with a Peace Corps volunteer who, in a drug-induced stupor in an apartment in Ulaanbaatar, finally remembers the lines to a Mongolian poem he has forgotten. “The words appear like the faintest light,” Howard writes. “Like a flash of knives in a cave. The words come to Warren in this high-altitude winter that has deadened the skin of his face and is now creeping inward, eating at his sinuses and teeth.” The poem verifies what Howard’s main character has known all along: his life means nothing in Mongolia. “We sit together / the mountain and I / Until only the mountain remains,” the poem concludes.

The novel’s lyricism accompanies a dark storyline; from the first stunning page, Howard plunges readers into a nightmarish landscape. He describes water so cold it hurts, silverfish and horseflies invading houses, beds, and body cavities, and garbage-littered streets. Of the Gobi desert Howard writes, “Later he heard infant camels screaming in the void and they sounded like human babies.” Warren works as an English teacher, but eventually hooks up with a beautiful, young Mongolian girl who helps him acquire blood tea, a rare hallucinogen. During the drug deals that occupy the latter half of the novel, Warren and a fellow Peace Corps volunteer drug their medical officer. When they accidently kill her, they feed her fingers to a buzzard. Such plot twists, rendered in stark prose, will keep many readers guessing.

Howard casts his main character in the role of the “post tourist” — a traveler who sees with two critical eyes, one turned on himself and the other on the society to which he travels. Although he faces hardships in Mongolia, Warren still prefers it to home, thinking:

In America there is no morning, only the lie of morning, when you scramble to the office lacking the morale to face another day, to dive into work that collected in your cubicle while you had the gall to be sleeping, to earn the funds to allow you to drone through a life consuming, consuming. Even a frigid wasteland is better than that existence.

Warren’s motivations for leaving the United States surface quickly— he seeks only escape from his dissatisfaction—and the book’s major contribution to travel literature lies in this portrait. Rarely do authors strip bare the motivations of Americans traveling and working overseas, often preferring more romanticized versions. However, in Tea of Ulaanbaatar, the moral imperative to help Mongolians gets nullified by the volunteers’ selfish motivations. The Peace Corps bureaucracy hampers the volunteers at each turn. The locals prove hostile. “That’s what Amerik founding fathers could never have understood,” one Mongolian lecturers Warren. “That you would use your freedom for nothing. You Ameriks, fat, and with all your petty dramas, you have enough food, enough housing, and what do you do? Do you make the world a better place? No, you corrupt each other.” Howard holds nothing back in this critique.

In describing Mongolians, however, Howard’s descriptions sometimes read harshly. “The Mongols don’t farm,” Howard writes. “I’ve seen the reports. They literally do not farm. That would take time away from drinking and beating each other senseless.” Howard’s characters frequently refer to the alcoholism of Mongolians. Such observations ring true to the characters but will surely leave a negative impression of Mongolia, a country rarely written about in the United States. Discerning the difference between fact and imaginatively created fiction becomes difficult for any reader unfamiliar with Mongolia. For example, no “blood tea” exists in Mongolia. However, camps of traditional Mongolian tents, called gers, do dot cities and towns. Ultimately, the novel resembles neither Flaubert’s sexualized Arabia nor Conrad’s hopelessly dark and ignorant Africa. Howard’s Mongolia appears bleak, but the harshest treatment of all he reserves for his naïve American characters.