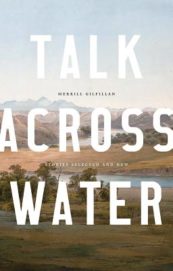 After running into an old acquaintance in a northern diner, the narrator in Merrill Gilfillan’s “Landscape with Frog” sets up the problem. He asks, “As I drove from town, the epistemological vertigo hit me. My God, I thought, how does it all keep going? How does the spoken world hang together in any form at all under such a built-in rule of memory-bumble and involuntary shape-shifting?” Feeling this “vertigo,” Talk Across Water, Gilfillan’s latest selection of stories, takes its own measure of the northern Plains—its sense of collective distance and memory, how language and narrative test the human limits here. The author gathers these stories from “certain looks on certain faces, hearsay overheard.” These subtle details feed a sense of shared solitude that propels the journeys here.

The characters within Talk Across Water often seem to inhabit these wide spaces as ghosts. Travel is circular; memory is an essential quality to the traveler, recalling the small human turns and movements that define a distinct American landscape, spaces where the boundaries have dissolved, much like at “sundown, when the colors faded and the lavenders took over.” In this dissolution, Gilfillan’s stories offer an alternative world, a reconsideration of how human beings can inhabit the Plains’ beauty and distance. As the narrator of “Cold Hands, High Water” puts it, “Like many American highways, know it or not, that stretch of Interstate in central Wyoming has a shadow route paralleling it.” Gilfillan’s travelers move through back roads or along railroads; they encamp near rivers or within itinerant gatherings. As they do, these “shadow routes” also move through them as travelers, and the only possible response is a shared but narrated silence. The tensions developed within these stories are a measure of how the characters inhabit that silence.

In this regard, the stories in Talk Across Water sometimes feel like something leftover from a previous century. Place is a recurrent focus; though a day’s journey seems sufficient, characters hearken to the distances here. Encamped along the river, they might feel secure near “the Missouri . . . dependable as a dog . . . its bulldozer sureness.” Still, they also sense some nearby or oncoming world. In “Victrola-Man,” an Assiniboine girl attends a gathering. She watches as her grandmother responds to traces of an old song being sung across the camp. The grandmother laments, “Nobody sings those real songs anymore . . . Nobody knows the words.” Looking for the singer, the girl tours the camp but finds it all “too loud, too harsh.” She’s shadowed by a group of boys who “snicker and cringe.” She crosses the space where sellers have set up shop—offering “things once living full-scale in the world and now playthings shrunken up small with time-distance.” Finally she locates the singer and convinces him to sing for her grandmother. As the man sings his “otter song,” the girl listens and looks “down into the bushes at nothing solid in the world.”

Gilfillan’s exquisite sentences take their measure of the Plains’ shared solitude. They catch the Plains’ drift and distances. They test the resilience of memory through stories—less routes here than traces. Resounding the silence of the place, they sound human movement in plain sight.