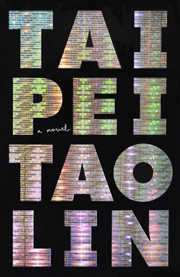 Tao Lin’s debut poetry collection, You Are a Little Bit Happier Than I Am (Action Books 2006), offered a dazzling display of unconstrained, direct writing, accessing the imagination and the physical world in a way that communicated human experience fully, without pretense or convention. His prose fiction—a short story collection, a novel, and a novella—showcase similar strengths, and these, along with the author’s inexhaustible electronic networking, have propelled Tao Lin to a unique kind of literary celebrity. Lin’s new novel,Taipei, may be the book that introduces mainstream readers to this significant young talent. Whether those readers are prepared for what they’ll encounter is a really interesting question.

Lin’s writing is stripped down and unaffected. Not only are his sentences and scenes decidedly non-literary, but his characters possess little affect. Because of the direct, declarative quality of his prose, it seems easier to recognize an important observation when it arises in Tao Lin’s fiction than in other, more literary writing, where the pressure on every sentence to be immersive can create an overly lush atmosphere. In Taipei, Lin flatly describes a lot of action, much of which can seem a little trivial, but out of this microscopic method, moments of keen understanding arise: “Paul grinned uncomfortably as he stared at one person, then another, thinking he had ‘absolutely nothing’ to say, except maybe what he was currently thinking, which didn’t seem appropriate and also kept changing.”

Lin’s main characters seem especially aware of the difficulty of inter-personal connection, andTaipei really captures the sense of what it’s like to possess a highly observant kind of intelligence that’s a little (maybe more than a little) anti-social. In that respect, Lin’s work engages the tradition of existential novels: Taipei echoes Jean Rhys’s Good Morning, Midnight, Albert Camus’s The Stranger, and, more recently, Michel Houellebecq’s Whatever and The Elementary Particles. If such comparisons seem like a stretch, I’m not the only one making them. Bret Easton Ellis’s blurb (Ellis himself makes a cameo appearance in the book) announces Lin as “the most interesting prose stylist of his generation,” and it’s fascinating to think about how that might be true, as Lin’s style seems like a style of no-style. Language often seems technical for Lin: there are a lot of numbers, ages, distances measured in feet or yards, estimates of crowd numbers, measurements of time. There’s not much figurative language, and the sentences aren’t especially elegant or notably crafted. But that’s the key. Lin attempts to present transcribed thinking (more than transcribed feeling), and for him, there’s no sense in putting literary style between a thought and its articulation (by contrast, it’s interesting to look at Jennifer Egan’s recent A Visit from the Goon Squad, which chronicles some of the same quarter-life energies, in some of the same New York locales, but in a much more stylized manner).

Taipei is probably not for everyone. Plot emerges, slowly, but mainly that plot has to do with drug use. There’s a love story, kind of, but “love” is not a word that the book would (or does) use; the intimacy between the book’s main character, Paul, and the woman he impulsively marries, Erin, is primarily associated with massive drug experimentation. Thousands of drugs are consumed in the book, and while Lin provides some theoretical framework for his characters’ thinking about drugs, that framework also sounds like addictive self-justification: “there was no such thing as a ‘drug problem’ or even ‘drugs’—unless anything anyone ever did or thought or felt was considered both a drug and a problem—in that each thought or feeling or object, seen or touched or absorbed or remembered, at whatever coordinate of space-time, would have a unique effect.” Overall, the main escalation in the plot is an escalation of use; the main question is whether Paul and Erin will survive. I’m sure there are readers out there who would find Taipeiindulgent and just plain tedious in its constant quest to stupefy its characters, but for me, the overt gestures toward autobiography in the book give these elements enough schadenfreude to keep me on the hook.

Since Lin hit the scene, he has been very active in the electronic promotion of his work, and in exploring the web and Twitter as expressive media. Taipei connects in compelling ways with Lin’s documented online life, including a famous YouTube moment in which Lin posted a video of himself at a literary reading and then asked viewers to identify the drug he was on during the reading. A lot of writers—a lot of people—would skirt this borderline sordidness, but what’s compelling about Lin is his approach to the whole self. There’s no pretense of heroism. There are no protagonists. If nobility emerges, so will selfishness, quirkiness, etc. “Anything’s weird if you stare at it,” writes Sam Lipsyte, and if Tao Lin is staring at himself in the mirror (or in his phone screen, more likely), it’s not entirely out of narcissism. There’s a desire to bring to light the whole array of human possibility, and to subject himself to the same critique that his writing applies to his characters.

I read Taipei in one long stretch on a six-hour air travel day. When I arrived home, I found Clancy Martin’s review of the book in The New York Times. I like the review and agree with Martin’s positive take on Lin’s work. However, Martin calls the book a bildungsroman—a coming-of-age story—and I want to resist this categorization, or at least complicate it. It arises at all largely due to the book’s final four words, “grateful to be alive,” which are thought by Paul after he survives a particularly gnarly drug episode. Certainly they are significant, but those final four words are really the only evidence the book provides of personal growth on the part of the main character; if he comes of age, it happens after the book ends.

Martin’s categorization of the book is based on his interpretation of Paul and Erin’s relationship. He sees them growing together, and argues that their love gives Paul something to live for. This too is debatable: they get married impulsively, and then gradually get sick of each other; by the end of the book, they’re barely speaking and not even living together. In the final drug episode, Erin is babysitting Paul after he has told her point-blank that he doesn’t care about her, before ingesting a combination of drugs that would sedate an elephant. Martin argues that Paul is just “reluctant to let go of the protective irony that has defined his youth,” but I think he’s much closer to the point when he says that Lin is “suspicious of notions like sincerity and authenticity.”

In the end, calling Taipei a coming-of-age story reduces the complexity of the book for the sake of increasing its comprehensibility. It’s hard for readers to face this kind of recklessness on the part of a character without imagining that he’s going to be coming out the other side of it as a better person. People might be afraid of this novel’s bleak drug content and unaffected critique of humanity, but that’s probably a more appropriate mindset to take into Taipei than the “it’ll all work out in the end” comfort promised by most coming-of-age stories.