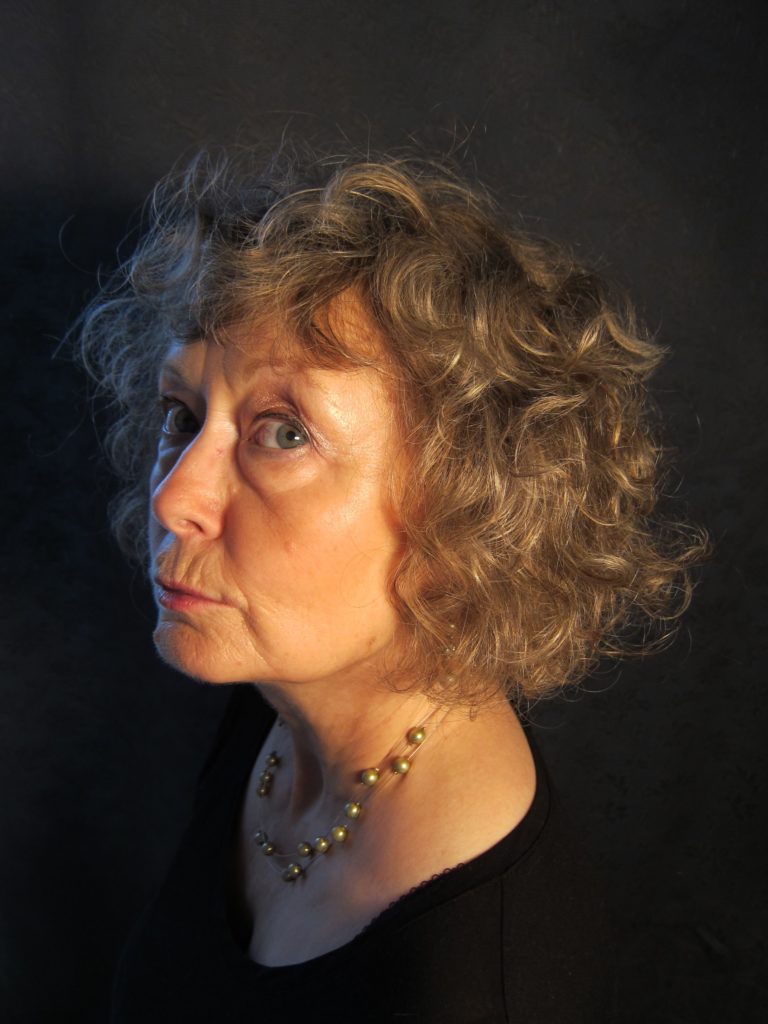 Based on the south coast of England, V. G. Lee worked as a sign maker and painter for many years, started writing in her forties, and became a comedian for her sixtieth birthday. In addition to writing fiction, Lee has been a columnist for The Lady and Gaia magazines. Many rightly laud her work for its humor, but it would be a mistake to characterize Lee’s work as simply funny. Hers is a deep humor—a unique combination of mirth and pathos whose affect lingers after reading.

This quality is on full display in Lee’s latest novel, Mr. Oliver’s Object of Desire (Ward Wood Publishing, $10). When we meet him, Mr. Oliver is hapless and unmoored from his identity, including his own sense of superiority, position, and male privilege. A Bridal Salon Manager at a high-end London department store in the 1970s, he has been fired after some unpleasantness involving a new hire, the beautiful upstart Claire Daker. The book alternates in time between the events at The Store and his life after, as he tries to both appease and fend off the advances of Doreen, a powerful woman he met on a cruise and joined for what he hoped would be a restorative few weeks in the country.

Rebecca Weaver: You mentioned recently that the originating story for Mr. Oliver's Object of Desire was a short story with Claire at the center that you wrote in 1994. Isn't that about the time you started writing? Was it one of your first stories? 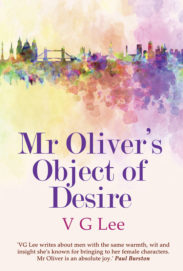 V. G. Lee: It was my first ever story. Back then, it was only about five pages long and I read it at my second creative writing class. At the time, I thought everyone else was straight, but one very smart woman in a red trouser suit was a lesbian and is still my friend and optician today! The class loved the story but I was too new to writing to do anything with it for quite some time.

RW: So something about Claire stuck with you—which isn’t surprising, because even though readers don't see much from her point of view, she is still the heart of the book in some ways.

VGL: She's an object of desire for Mr. Oliver, Frances, and Carpenter (possibly Ned, too), but not a passive object. Much to Mr. Oliver's fury and sadness! She is certainly the focus of the main characters—even Doreen, who sees her as a much younger rival. I did change Claire over time and made her less of a victim and more feisty.

RW: Speaking of Claire as an object of all sorts of desire, I'm really intrigued by the queerness of almost everyone in the book, even the straight characters.

VGL: Several readers have noted that, and I'm not sure how it happened. Possibly at the time of initiating the characters I was still in a process of coming out myself and fascinated by all the opportunities presented to me.

RW: Doreen’s power and sex drive render her queer, Mr. Oliver is often mistakenly considered queer by others, Carpenter is queer in his inability to relate to people . . . even Steve, who also becomes another heart of the book, is kind of queer, too.

VGL: I did feel that Steve could possibly be queer because he talks a bit about women but never really on a personal level. More and more I feel that even straight people around me are capable of being queer in some aspects.

RW: The idea that "everyone is queer somehow" is present in life, too. The fantasy that there is a perfect love story or a perfect way that people are gendered seems less and less useful or believable for people I know and interact with. I see Mr. Oliver embracing this fully at the end of the book; he drops desire for perfection in favor of something deeper.

VGL: Yes, I believe—as a writer believes in their characters—that he became a more sensitive and caring man with some self-awareness at long last. I did consider pairing him off with Doreen but could not imagine him finding her sexually attractive, which he did need in a relationship but combined with love.

RW: He is certainly unpleasant, but I suspect that most readers will sympathize with him as he fights off Doreen and they want him to find something like self-awareness. There is that small turn in which Venables tells Doreen about how Mr. Oliver helped Junior. I thought, "ah, here we go!"

VGL: I think around that time he started to move away from his nastier self—until then, even though he'd become more aware of what he'd done, he wasn't quite willing to give up on pursuing Claire.

RW: It strikes me that many of your main characters, including Mr. Oliver, have a kind of heartbroken hilarity, but the jokes are not meant to lighten the melancholy—instead they deepen and transform it. They work together in your work in a very unique way.

VGL: I laugh sort of ruefully at “heartbroken hilarity” . . . but this is very true. People and their lives are so often tragic, full of missed chances, acceptance of second or third best—I've done it myself, and so I put a humorous slant on it to make it bearable. I can rarely write a character without knowing their honest and believable backstory. Imagining someone had a “happy childhood” is never enough, and never the full story.

RW: And frankly, it's boring.

RW: Speaking of childhoods, however: I found that moment at the club, where Steve and Mr. Oliver talk about their boyhood, pretty interesting. While we don’t hear that talk, I’m left with this sense that their boyhoods weren't unremarkable, yet got them to where they are now.

VGL: Yes. Steve mentions having worshipped his mother's cotton socks a little too much, which is perhaps why he is a lonely person yet capable of being the life and soul of a party. Mr. Oliver remembers a reserved father and a quiet mother who died when he was a young boy, which meant he had no female role model in his life—possibly from there came his disrespect for women.

RW: Steve is very interesting. He's not, on the surface, a huge part of the book, but he influences a lot of what happens to Mr. Oliver. A kind of guardian angel. I'd love to hear about how he emerged as a character as you developed the story.

VGL: Steve was in the story right from the first, and I don't know where he came from but he was very real. I think I felt that Mr. Oliver would have some sort of friend who he could patronize and that they would go way back. Steve, from his side, probably admired Mr. O's success, particularly in the periods when he was on the skids but also cadged money and dinners off him. So it was to their mutual benefit. And then having Steve become successful just as Mr. Oliver’s fortunes changed for the worse worked well, and brought out different sides of their characters and information.

RW: He seems to force Mr. Oliver to understand real compassion—a compassion that Mr. Oliver didn't show toward Steve, and possibly might not have known how to.

VGL: This is true. Steve is a far better person, or at least perhaps due to hard knocks he has more understanding.

RW: Near the book’s end, both of them have to reckon with the end of life, providing opportunities for shifting one's view of the world. Steve seems to be in that space throughout most of his time in the book, though—I get the sense that he knew he was sick long before he told Mr. Oliver.

VGL: I'm sure he did know. In an early chapter, Mr. O makes reference to Steve going in for “snips and biopsies” although he doesn't take this as serious—but you don't have such things if you're totally healthy.

RW: Let’s talk about fashion—it is much more than a narrative vehicle or scene-dressing in this book; it is Mr. Oliver's vocabulary, and his one assured way of meeting the world. Was his expertise in fashion always something you knew about him?

VGL: Mr. Oliver has much experience of women’s fashion, but based on clothes from the 1940s and ’50s. His fashion knowledge is stuck in a rut which is why he is finding the youth-led ’60s and ’70s hard to deal with. The grand old London Stores were also quite set in their ways because the money lay with their older customers, so they wanted to keep them happy. I worked in such a store from 1969 to ’75; all the youth fashion was mainly going on in the boutiques, which were thriving. Mr. Oliver’s vocabulary is filled with references to Berkertex, Aquascutum, Windsmoor—all clothing retailers serving a middle-aged to elderly market, priding themselves on classic quality. This knowledge about cut, cloth, classic styling was Mr. Oliver’s bedrock which is why he was so rattled by the boutique.

RW: I find the shifting points-of-view work really well, and I don't think it happens that often. I'd love to hear about why you decided to structure the novel this way.

VGL: I was aware of the dangers in using shifting points of view, and it did take a lot of thought. In each case, but particularly with Doreen’s engagement party, I had the different characters almost looking inwards towards a central theme. To carry multiple POVs off, I think one needs a strong but almost invisible framework. I know from my own reading that it can be unsettling moving from one character or situation to a totally unknown character or situation. Each has to add to the information available around the central theme but also link to each other. So Madge, when drunk, talks to Carpenter, who has already annoyed Mr. Oliver, who has been forced to dance with Doreen and be introduced to Madge’s husband, Martin Renshawe—who Madge then sets off in search of.

RW: You've been mentioning "Deirdre" a lot recently as a character you're working on—who is she, and what kind of work will she appear in?

VGL: Deirdre is a secondary character in my novel Diary of a Provincial Lesbian. There are also several short stories about her; two in the collection As You Step Outside and one in an LGBT anthology called Men & Women. She is straight with a partner, Martin, and a cat called Lord Dudley. She is an anti-heroine and provides many funny situations. Because stories around Deirdre have proved so popular at my reading events, there is now a work-in-progress called The Book of Deirdre that follows on from Diary of a Provincial Lesbian.