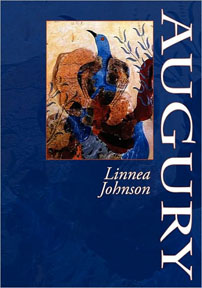 The critical term “unpacking” is undoubtedly overused, but it may be hard to avoid when reviewing Linnea Johnson’s Augury, which bulges with allusions, tropes, myths and memories, images and stories. Johnson’s lines are often long and dense—not in a Whitmanesque sense, but rather in a shamanistic song-story sense; despite the hint of foretelling in the title, she celebrates past more than future in these poems, telling the narratives of her life, the lives of others, and the culture(s) she embraces and questions. A great deal of energy and imagination has been bundled into this book, to wonderful effect.

The practice of augury is deeply connected with birds, generally applying to any sort of guidance or oracular knowledge divined through their behavior or appearance. Feathered creatures both domestic and wild populate Johnson’s book. They are not symbolic but physical presences in the poems; although the author is clearly well versed in the symbolic uses of birds, her chickens live on specific farms, the chickadees she sees exist in the world the speaker inhabits. Even mythical Freya’s ravens, which open the book (in the poem “Freya’s Ravens”), inhabit the henhouse of a relative in the guise of iridescent chickens who risk being sent to the stewpot if they stop laying. They are the hens of a genuine and palpable memory, as are the passenger pigeons whose journey to extinction Johnson laments in lines of dense description and considerable heartache. In “Martha. When We Went Very Near Them,” Johnson berates those she calls “The Killers” for taking advantage of the knowledge “that the wild / goes quietly and the rest of us learn not to notice or demand / that the killing stops.” The pigeons and the chestnut forests, once plentiful, belong now to the past; the poet invokes them through details that teach as they mourn:

Passenger pigeons,
their small bills, black and slender, their bright red eyes and legs,
tails long and wedge-shaped, wings, long and pointed,
powered by great breast muscled in which lived
their ancient capacity for prolonged flight

Augury, however, is hardly a one-note book guided by an over-arching conceit. Johnson’s concern for animals is evident throughout the text, but so is her concern for the human condition, most notably our need for love. Her previous work centered on feminism, memoir, place, sexuality, motherhood, and myth—particularly female-centered mythology—and Augury continues such explorations. Beat poetry influence can be heard in her lines, quirky and individualistic, a synthesis of styles and loves, passionate interpretations in which the reader senses resonance with previous writers. Sometimes, her line breaks build toward the abstract, accusatory blaming of the speaker who “has lost everything”:

In “Your Body” and “Making Love,” by contrast, the sensuality is as celebratory as Lucille Clifton’s, though the lines and images differ. Johnson’s use of language is also sensual and physical, as in the body-centered “Knees Mending” which hearkens to memories of childhood where “The hollows of me ring // with night whistles, the clackety brush of air disturbed / and clattering at my cheek.”

The piling on of image and narrative here can feel a little like being tucked into bed under too many layers of quilts, and those readers who prefer spare poetry may find Augury a bit too warm and smothering. But here is where the cliché of unpacking serves: stay with these poems, delve into them, pay attention to the patches and the patterns, and you’ll be rewarded. Besides, amid the complex and long-lined joys of a poem such as “Into River” and “Grackles,” there are brief gems, deceptively simple, like “Marriage Manual” and “Evensong.” Both of these are wise poems full of yearning, and their brevity acts to balance the story-poems (“Unmarked Grave,” “Swedish Christmas . . .”) well in the book as a whole.

Released in a larger-than-average 7” x 9” format that suits Johnson’s ambitious poems’ lengths and line-breaks, Augury possesses the attributes of a good collection: balance, depth, beauty, surprise, and intriguing premises. It is the kind of book that begs to be re-read, because each reading offers a new discovery.