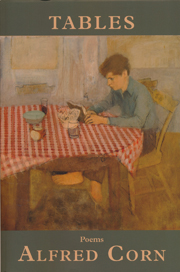 Alfred Corn has published nine volumes of poetry since 1976. He has also published a novel and a book of essays as well as a book-long study of prosody. So he knows, presumably, how to construct a readable poem. Unfortunately, in his new book Tables, he stuffs many of his poems with overwhelming information, too much for the reader to find a coherent idea. An example is a long effort—I’m not sure whether it’s verse or prose poetry—titled “Oklahoma,” a dense, rambling testament to the near South. Here are middle lines of this three-pager:

Lawton’s Fort Sill, Tulsa’s Lockheed, and McAlester’s ammunition
Plants evidence the martial character of a people whose staked claims
Were often guaranteed by gunfire, and whose blood paid for conflicting
Rebel and Yankee loyalties. No better training for war than team
Spirit—just ask Jim Thorpe, or, since you can’t, inspect the medals displayed
In his house at Yale. Where’s the Wrestling Hall of Fame but in Stillwater?

If this is poetry, it’s also pedantic; Corn’s eagerness to tell you all about this or that frequently gets in the way of his intended art. When he is more disciplined in his lines, Corn writes well, if coyly, as in the first four (of seven) couplets written during a flight from England to Russia:

Mind, though they’ve banned material counterparts,
Your conscious page and pen got past the guards.

Think back to Mandelshtam at the Black Sea,
Composing silently, invisibly . . .

“It must be memorable.” Yes, or else
Our uninscriptions will unwrite themselves.

Then, too, if bombs incinerate this brain,
It won’t recall so much as my own name.
(“In-Flight Couplets Composed During a Bomb Alert”)

Corn is also fond of sonnets, and shows a playful side in constructing them—sometimes Italian in form, sometimes Shakespearean, sometimes a mix. The form limits his loquacity, and sonnets such as “St. Anthony In The Desert” and “Domus Caerulea” demonstrate that Corn can ennoble his writing with discipline. We see it too in the final six lines of his masterful “After Valery”:

If the soul is absent, summoned to Hades,
Your form, whose womb a fluid forearm drapes,
Is awake. Your form’s awake, and your lover sees.

Corn also knows how to wave to friends in the crowd. In Tables, he writes “letters” to famous poets whose paths he’s crossed over the decades—Marilyn Hacker, Robert Pinsky, Grace Schulman, James Fenton—and refers to other literary figures such as the late Joseph Brodsky, all obviously intended to make the reader well aware of his connections, that he’s read the right books, and knows all the inside jokes. But one can tire easily of such name-dropping, however much one might appreciate the erudition and literariness of it all.

At his best, Corn can write a pithy effort of simple beauty—as in the final poem of Tables, “Lighthouse”:

Here, the poem hews to brevity, rather than expanding the basic trope into a dissertation. Alfred Corn seems to know this course is better, but he too often ignores this most basic element of craft: sculpting one’s work.