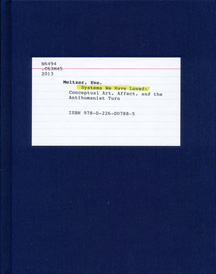 There’s something immediately off-putting in the title of Eve Meltzer’s book, Systems We Have Loved: Conceptual Art, Affect, and the Antihumanist Turn. Uncomfortably, Meltzer’s title implicates the reader in loving systems—but aren’t systems the problem, something to resist if not oppose outright? After all, systems have long been a familiar mode of oppressive logic, division, and hierarchical order imposed upon human subjectivity. Rarely, if ever, do we willfully embrace, let alone love something so seemingly unworthy of affection. That changed, however, in the late twentieth century, when a number of artists abandoned overt sentimentalism and pathos in favor of the least artistic of palettes—gone was the legible, sensate work and picture plane, gone too was emotive figuration and abstraction, and in its place came the coolly scientific, numeric, and catalogic, the harshly mathematical and the fiercely structured. In short, a rigorously systematized art was brought to bear on the public, and if the public wasn’t thoroughly up to date with Saussurean structuralism, chances are they were left slack-jawed before this new and seemingly lackluster work.

This antihumanist turn, as Meltzer calls it, began in the early 1960s, with the proto-conceptualist work of Robert Morris, and developed into the fully articulated conceptualism of the 1970s, with such notables as Sol LeWitt, Hans Haacke, Mary Kelly, Robert Morris, and theoretician Rosalind Krauss making significant contributions that challenged a variety of aesthetic and theoretical discourses. To fully appreciate Meltzer’s argument, it is key to understand the careful attention she pays to the operative terms of conceptualism and structuralism, and how interwoven these terms are to their cultural context. Meltzer writes, “In the 1960s, by which time structuralist claims and polemics had encouraged the advent of conceptual art, they also raised intractable problems that conceptual artists were forced to process.”

Central to Meltzer’s book is what structuralism maintains: Human endeavor is inescapably governed by the structural order of systems and constitutes the human subject itself: “structuralists argued that all social and cultural phenomena could be mastered through a ‘science’ of the signifier . . . Perhaps most importantly, structuralism produced and made urgent the problem of the belatedness of subjectivity: the notion that the human subject is a mere effectof preexisting systems.” The notion and condition of belatedness is a key feature to any structuralist system; it followed that conceptualism would be forced to confront this issue on a fundamental level.

Meltzer argues that the many interventions made by conceptual artists have often done the necessary work to efface such strident claims made by structuralism. Crucial to the dislodging of belatedness is the administration of affect that conceptual art makes available, due in large part to the delicate but severely tense frisson that exists in the relationship (the in-between-ness) between the fixity of conceptual systems of permutation and external interference. It is an issue of encounter—not the expression of an idea or emotion—that is preeminent to the conceptualism in question. The artists under Meltzer’s examination often push back against the resolutely scientific structuralism they engage—those many systems of internal logic and self-sufficiency—most simply by subjective interplay, transpiring within and across the faintest of intensities and encounters of the unnoticed. While the results are varied and at times ambiguous, the affect that is sustained with its mutual intensities is far more crucial than the prescribed dialectical tension brought on by the proximity of disparate bodies brought into relation as part of a system. Notions of fixity and frailty are engaged and played upon in order for affect to be the encounter, that not only serves to provide for un-prescribed outcomes, but that defies the very systems that brought them to bear. Coded modes of activity lead to uncoded indeterminacies that challenge the normative progressions of a system and, ultimately, muddle the authority of internal logic.

Meltzer is at her most brilliant when discussing Mary Kelly’s evasive and expansive work, which serves to bracket the text. Meltzer initiates the book with a close reading of Antepartum, and returns to Kelly’s work in the final chapter with a thorough investigation of the six-year, multipart work, Post-Partum Document. Beginning in 1973, Antepartum and Post-Partum Documentcomprise the artist’s preoccupation with the “story of subjects.” While Antepartum is a visionary work, comprising of ninety seconds of film, it is Post-Partum Document that mesmerizes under the illuminative reading of Meltzer’s analysis. It is a careful parsing, not only of the information of grief and Lacanian science, but of the forms information assumes, and the complexes of interstitial space made available so that affect may occur—and better connect person to object, object to art, and, ultimately, person to person.