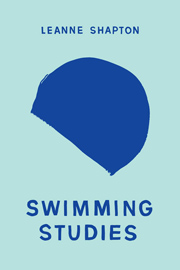 Swimming has appeared from time to time in Western literature, often as a test of manly endurance. Odysseus swam for two days in the wine-dark sea, while Beowulf made it for seven, wearing a suit of armor and battling sea monsters along the way. Ben Franklin stripped down, leapt into the Thames, and demonstrated his aquatic expertise all the way from Chelsea to Blackfryars. Lord Byron braved the Hellespont and survived to write a witty poem about it. F. Scott Fitzgerald even turned it into a metaphor: “All good writing is swimming underwater and holding your breath.” And then there is that famous John Cheever story, “The Swimmer,” in which the protagonist follows a river of swimming pools though suburban Connecticut. Yet Swimming Studies may be the first literary book entirely devoted to the grueling agonies and occasional ecstasies of competitive swimming.

It is fortunate that someone with Leanne Shapton’s sensibilities and talent has plunged into the depths of the sport. In her teens, Shapton tried out for the Canadian Olympic team, and ever since, has been unable to leave the pool entirely. “When I swim now, I step into water as though absentmindedly touching a scar. My recreational laps are phantoms of my competitive races,” she writes. Willard Speigelman, in an essay published in American Scholar a few years ago, observed that the loneliness of the long-distance swimmer is much lonelier than that of the long-distance runner. Shapton precisely and accurately describes the state of mind a swimmer experiences as a result of the sensory deprivation: “As I swim, my mind wanders. I talk to myself. What I can see through my goggles is boring and foggy, the same view lap by lap. Mundane, unrelated memories flash up vividly and randomly, a slide show of shuffling thoughts. They flash up and fade, like the thoughts that float peripherally before sleep, either inconsequential or gathering momentum into anxiety before eventually dissolving.”

The book is composed of fluid associations, and it subtly moves from Shapton’s teen years as a competitive swimmer to her later years as an adult trying to understand how this obsession fits into her life. The individual pieces have titles like “Quitting,” “Goggles,” and “Bathing,” and often dramatically shift from past to present, as if the subject itself were refracting through waves on the surface of a pool. Along the way she meditates on the physical and metaphysical dimensions of swimming, churning together reflections on family, relationships, aging, death, and other heavy topics. The density often generates serious undertow. Her fascination with theTitanic, for instance, propels one essay. At a museum exhibit, she has the opportunity to touch a piece of the famous ship: “A hole about one and half inches is cut through the top of the plexi so a visitor can extend a finger down toward the scrap and, indeed, touch the Titanic. I look at the small grubby cloud on the black metal where people have stabbed their fingers. It’s a strange, morbid glory hole, a Blarney stone of tragedy; me, the doubting-Thomas tourist.”

The book itself is an object to behold; clearly Blue Rider Press invested much into its production quality. Interspersed throughout are photographs and Shapton’s own watercolor paintings of swimmers, pools, and other water-related things, usually presented with curatorial commentary and brief narrative that add another dimension of meaning to the overall work. One section titled “Body Size” displays her extensive collection of swimming suits. The accompanying captions and prose snippets explore the aging body and the drives of habit, working their way toward this telling observation from psychologist Adam Phillips: “Our excesses are the best clues we have to our own poverty; and our best way of concealing it from ourselves.”

Swimming Studies feels like a book that had to be written, but more importantly it contains an astonishing amount of grace. “Do I have a long-term goal?” Shapton asks toward the end, as she gets back into training with a master’s team. “If anything, it’s to figure out what to do with something I do well but no longer have any use for . . . The one thing that I am formally trained at is swimming. I’m aware that I rely on this training when I’m working . . . But I don’t know where to put the old skill, if I can, or even want to, incorporate it into my adult life.” Even if Shapton ultimately quits her master’s team in favor of the fine art of bathing, she seems to have found, by writing this book, what to do with swimming. The writing, the artwork, and the arrangement embody a discipline not unlike that of an elite athlete: the whole thing looks easy, belying no trace of the countless hours of training and hard work that went into making the beautiful seem elegant and entirely natural.