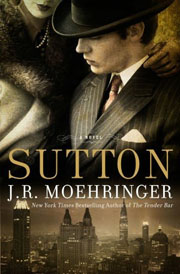 Of any two thieves, one is likely good—or so scripture recommends, and more or less, so we believe. Also, of late the feeling circulates that those who manage the banks are a worse bunch of crooks than those who stick them up. Both of these attitudes bode well for the reception of J. R. Moehringer’s novelized life of Willie Sutton, the folkloric bank predator of the American mid-century who is famously, if a-historically, recalled for having said that he robbed banks because “that’s where the money is.”

Moehringer—a Pulitzer Prize-winning journalist, a successful memoirist (The Tender Bar), and widely-praised Andre Agassi ghostwriter (Open)—chooses for his novel’s present moment Christmas Day 1969, the day after Sutton’s sudden, unanticipated release from the Attica Correctional Facility in upstate New York by Governor Nelson Rockefeller, a former banker. History says that on that slow-news day, Sutton was shepherded around his old New York City haunts by a newspaper reporter and photographer assigned by their paper to get the legendary criminal’s inside story and, in particular, to get the straight dope on his involvement or non-involvement in the gangland style slaying of Arnold Shuster, the Brooklyn tailor’s son whose spotting of the then FBI-Most-Wanted Sutton on a subway train in early 1952 led to his last, definitive incarceration in 1954.

In actual fact, not much came of that day-long interview, says Moehringer in his prefatory note: a brief newspaper story “with several errors—or lies—and few revelations.” And now, “sadly, Sutton and the reporter and the photographer are all gone,” says Moehringer. Thus, he licenses himself to invent the day as he “guesses” it might have happened. In so doing, he suppresses the real journalists’ names, applying, instead, the epithets Photographer and Reporter to his novel’s characters. Also, he suppresses the name of the newspaper they worked for, calling it simply “the paper.”

So Moehringer’s sense of his historical license is liberal. Still, the autobiography that his Sutton mulls as he tours his wasted life’s principal scenes on that Christmas Day is both credible and sociologically convincing. Sutton got his first breathing start in the turn-of-the-century Brooklyn waterfront ghetto called Irishtown, a clapboard district of taverns and mean streets whose beckoning westward horizon was ever and always lower Manhattan’s financial district. In the first fourteen years of his life, the country went into recession four times; indeed, he was born in the year of the New York Stock Exchange’s first crash, the Panic of 1901. But by his reckoning, the lights never dimmed in lower Manhattan. In good times and in bad, the rich do okay for themselves, he concluded. Similarly, his dad’s doomed blacksmithing trade taught him that it was possible to work hard in America and go nowhere. Meanwhile, his elder, sadistic brothers’ cuffs to the back of his head drove home the understanding that those with the power to cuff in this world do so. And, lastly, he learned from his dead-end Irishtown buddies that the snitcher is the vilest of all creatures.

Because Willie was bright, his parents briefly imagined he might become a priest. Next, when that suggestion failed, his dad recommended that he follow him as a blacksmith. No, said Willie, not that either. He left school and for several frustrating months looked for work. Then, fate intervened and, of all places, a bank offered him a spot. He liked the job, liked the piles of money in the vault, and did well. However, the approaching First World War stalled the economy, and the bank let him go. Soon after, however, the same War put him back to work—in a munitions factory. The Armistice and a second layoff followed.

He was an unemployed, lightly educated eighteen-year-old when on the Coney Island boardwalk he met the girl who would put him on his lifelong career path. Her name was Bess Endner; she was the daughter of a ship-builder, a family friend of the Rockefellers, about two years younger than Willie, and a free spirit. When her father forbade the courtship’s progress, Bess suggested that Willie steal both her and her dad’s money. She knew where his company’s safe was and when it would be full. Next, a few days after the safe’s smashing, Willie, Bess and an accomplice were arrested in Poughkeepsie, NY. In front of the judge, Bess performed beautifully, claiming most of the blame for herself. As a result, the judge dropped light sentences on all three, and, thus, as Willie’s probation began, it looked as if he might with only minimal inconvenience go forward productively in his unfolding, if unpromising, life.

However, the fact that his and Bess’s outlandish caper had been in all the newspapers made Willie hard to hire. Also, his family had disowned him, and, worse still, Mr. Endner banished Bess to Europe. Heartbroken and without prospects, Willie starved for a time. Soon, however, Prohibition put him back on his track. By quintupling New York’s outlaw community, the national liquor interdict made likely the chances that a young man like Willie would be taken in by people of unsophisticated morals, by people with “bankable” skills to teach—skills such as safecracking.

And that’s what happened—with the long-term result that Willie would spend the largest segment of his adult life working his way into and out of penal institutions. By the end of his career, the novel’s present moment, he had robbed countless banks and escaped three prisons thought to be airtight. His signature method in both of these activities was the donning of a disguise, usually a uniform of one official sort or another. Most famously, in a guard’s stolen uniform, he walked a ladder right up to the wall of Pennsylvania’s Holmesburg Prison and simply climbed out.

For deeds like these, Sutton’s was the eleventh name ever to be posted on the FBI’s Most Wanted list. Ironically, also for deeds like these, he became the Truman-Eisenhower Era’s folk anti-hero par excellence. For that large, working-stiff segment society who admired him, he was Slick Willie and Willie the Actor. He wrecked their vengeance on the hated banks; he did no physical violence to anyone (save, perhaps, to Shuster), and he said (that which, in actual fact, he never said)—that he robbed banks because that’s where the money is.

Of course, had he said it, he would have been one of the smartest philosopher / psychologists who ever lived, for he would have been talking about all of us—Americans and lots of foreigners too—and why we really do the things we do. Also, his deadpan confession, had he said it, would have offered a fairly succinct analysis of how things actually work in America, making him a first-rate social scientist. Still, though he didn’t say it nor anything remotely like it, Moehringer’s novel clings to the hard-knocks felon-sage notion of Sutton. To him and to his associates, Moehringer attributes a tommy gun’s round of clipped, scapegrace utterances.

Several make for enjoyable reading. Apt, for example, is the shouted response of Eddie, one of Willie’s best boyhood buddies, to the fact that he, Willie, and another boy were catching nothing—absolutely nothing—as they fished one day in the sewage enriched waters of the New York harbor entrance called the Narrows: “Whole fuckin thin is rigged! Whole fuckin thin is rigged!” shouted Eddie, meaning, of course, just what he says, not just the fishing. Amusing, too, is what Willie’s first hooker acquaintance says to him as the Depression ends and as Wall Street regains steam. In those flush times, when most of her clients were financial guys, she warned Willie about bankers: “[They] don’t ask, Willie, they take.” And, lastly, entertaining is Willie’s response to the Reporter’s remark that “every generation says that the world is getting worse”: “And every generation is right,” said Sutton.

However, over the length of the novel, this sort of talk detracts from the bio-fiction’s credibility. Of the novelized life of an iconic American criminal, we expect more than a Bogart-Cagney fix for the rare weeknights when our thousand-channeled televisions are not carrying their movies. We ask for history, context, and Dostoyevskyan insight into the criminal mind.

Moehringer’s text makes feints at these greater goods. As per history, for example, it reminds us that the longtime felon was released from prison in the year of Norman Mailer’s mayoral run, the Apollo 11 moonwalk, and the Manson family murder spree. However, if any substantial reflections might be drawn from those facts, either about Sutton or about the year, they don’t occur to me. Again, the text in several instances makes the point that Sutton was an avid reader of quality books. When the list of novels found in his Staten Island apartment at the time of his last arrest was published, says Moehringer’s narrator, those books—Proust’s among them—leapt to the top of the bestseller charts. To be sure, however, one does not go to In Search of Lost Time for an enriched reading of Sutton, nor vice versa. That sort of genuine intertextuality is not at play in Sutton. In fact, for a reader who is likely to chase literary allusions, the novel’s several returns to Willie’s curiously learned reading habits—see, for example, the new inmate’s and his last warden’s brief discussion of Ulysses, in which the warden-Willie relationship is paralleled with that of Buck Mulligan and Stephen Dedalus—is merely literary window dressing.

On the other hand, if Sutton has a saving grace, it is its convincing portrait of the legendarily cipherous ne’er-do-well. The novel is particularly good in this regard in its climax, when Willie finally gets where he most longs to get on the day of his release. In his encounter with the now deceased Bess Endner’s stand-in, her granddaughter, Willie destroys the fond notion that good thieves and bad are equally numbered. Or, at least, he demonstrates that he’s not among the good. His bad grace at novel’s end makes for a good scene in a novel marred by its influences, among them Dashiell Hammett’s—who reportedly once said, “I’ve been as bad an influence on American literature as anyone I can think of.” If only Moehringer had heard him.