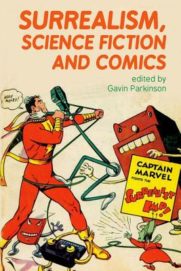 Gavin Parkinson is a man on a mission, and not just a mission to Mars. His mission is to establish academic scholarship on Surrealism’s link to science fiction and to comics, a line that many fans of science fiction and/or surrealism have known about for years. Even the most casual observer of Surrealist art will note its fantastic nature of the art, the blurring of lines between machine and man; Surrealist films too are definitely science fiction, if retrospectively clumsy and hilarious in the effort (which may have been intentional). If anything, the connection between Surrealism and science fiction seems almost too obvious.

Nonetheless, Parkinson does an excellent job in the book’s introduction setting up the debate. He cites art critic Clement Greenberg, that arbiter and simultaneous villain of modernist and abstract art, as making the case in the 1950s that Surrealism couldn’t really be considered “high art” because it was too tied to popular media, therefore putting it in the category of “kitsch” instead. So anxious were academics to recover the good name of Surrealism and its place in the pantheon of high art that they rejected Surrealism’s link to popular forms such as science fiction. And apparently it was never spoken of again in academic circles, with the exception of a few oblique references here and there.

After laying the groundwork for his argument, Parkinson then gives others the opportunity to weigh in. The collection includes a mix of scholars from the U.K., the U.S., and Canada, including Joanna Pawlik, Julia Pine, and Jonathan Eburne, among others; each offers a chapter on, say, Magritte’s drawings and paintings, Salvador Dalí’s artwork and influence, or the Chicago Surrealists, who have always been interested in comics and pop culture as well as works of “high art” and literature.

Parkinson himself writes the first chapter, which explores Jules Verne and his influence on not only subsequent science fiction, but on Surrealist authors as well. Parkinson discusses how often Surrealist writers pay homage to Verne, pointing out that growing up in the late 19th century, the Surrealists would have encountered Verne’s books as children and been influenced by them at an early age. Again, it’s somewhat baffling to think there is any controversy over Verne’s contribution to the history of SF, but apparently there are “ongoing debates between SF scholars about this genre’s identity [due to] questions about whether SF is a specifically twentieth-century phenomenon.” Outside of academia, most people accept that there were a number of 19th century writers, including Verne, H.G. Wells, and Mary Shelley, whose writing prefigured, influenced, or was considered science fiction.

Importantly, these critical anxieties were rarely felt by the Surrealists themselves. Julia Pine’s chapter on Salvador Dalí, entitled “A Fantastic Voyage: Mapping Salvador Dalí’s Science Fiction World of Tomorrow” begins with a passage from Dalí’s book, Dalí on Dalí:

Dalí the Futurist is the most percussive and the most outstanding antiromantic, synthetic image ever applied to the demiurgic strabismus, Op Pop, and Pompier Art. (194)

Dalí, a relentless self-promoter, was obviously more concerned with his place in the popular imagination of his time than with whether or not Clement Greenberg considered his work to be “high art.” He is further quoted as saying that “art and science will have merged by 2001” and clearly, he sought to be a part of that movement. Pine goes on to discuss Dalí’s interest in all things “scientific” (although sometimes his version of science is a bit specious), including his space age wardrobe; she describes Dalí wearing a “gold leather space suit” that he wore while “posing inside his latest brainchild, an ‘ovocipede,’ a transparent plastic sphere that rolls merrily along while its operator sits comfortably (says Dalí) encapsulated.” The accompanying photo on the next page, courtesy of Time magazine, 1960, is, as they say, worth the price of admission.

In fact, all of the photo plates in this book are stunning, despite the fact—or maybe even because of it—that they are in black and white. Black and white photographs and drawings are often used in academic books because they are less expensive to reproduce, but in Surrealism, Science Fiction, and Comics they also give the book a pleasurable retro feeling, one that evokes looking at old comic books or science fiction movies from the 1950s and ’60s. There is a great mix here of classic Surrealist paintings, rarely seen drawings, comic art, and science fiction movie stills and drawings.

The key element that makes this book worthwhile is not the tired high art vs. kitsch argument, but the fact that it makes Surrealism relevant beyond the interwar years. For many people, Surrealism is seen as having existed for only a short time in Europe, petering out after World War II began—a belief which is decidedly untrue. André Breton was an ambassador for a living Surrealism until the day he died in 1966; this book brings Surrealism even further past Breton’s Surrealist Manifestos of the 1920s, and includes a number of “second generation” Surrealists as well as fellow travelers. The sharp attention to the contributions of the Chicago Surrealists, headed up by Franklin and Penelope Rosemount, also shows Surrealism as an active practice today. These, again, are narratives that practitioners already know but academics tend to overlook, making the effort here an important addition to art and literary history.

As Surrealism, Science Fiction, and Comics is an academic book, some of the language can occasionally be opaque, and there are moments when the argument being made seems much ado about nothing. But this book is generally a good and interesting read that anyone with an interest in Surrealism vis-à-vis the history of science fiction and comics will find useful; it has a wealth of references, with interesting footnotes and an extensive bibliography and index. Parkinson has done an admirable job adding details and signposts to the endless journey of Surrealism.