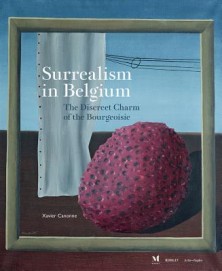 It took decades, but the Belgian Surrealist painter René Magritte, with his perceptual games, his unsettling substitutions, juxtapositions, and transformations, changed the way we see. For that he's considered one of the great artists of the last century. The specific environment in which he thrived, however, is very little known. This exhibition catalog from the first major American survey show of Belgian Surrealism, at the Baker Museum in Naples, Florida in early 2015, is part of an effort to redress that.

For the most part, this new treatment focuses on visual art (the Belgian movement was also strong on the literary side), and the selection of works amply illustrates the range produced over roughly seventy-five years. The Brussels Group, as it was known at first, got started at the same time as its more celebrated Parisian cousin, in the mid 1920s. From the beginning, though, they distinguished themselves from the main branch by rejecting automatic writing and drawing and other attempts to plumb the unconscious. The Belgians did share with André Breton's circle a commitment to revolution, surprise, and transgression, but theirs was a more rational aesthetic. In addition there was, as Xavier Canonne (Director of the Museum of Photography in Charleroi and one of Belgium's pre-eminent scholars of modernism), who curated and wrote the catalog texts, puts it, "the difference of attitude and form that distinguishes the Brussels group from its Parisian counterpart: acting in the shadows rather than under the chandeliers of salons . . . [relying] on their own cunning and anonymity." The book's title, thus, borrows Buñuel's to refer to the middle class, rather than bohemian, lifestyles of many of the Belgian movement's main participants, exemplified by Magritte's signature bowler hat, Paul Nougé's career as a chemist (though, he was, in addition, a founder of the Belgian Communist Party), and Paul Colinet's as a suburban civil servant, for a few examples.

Early on, Magritte, and Nougé, a writer, mostly, and the Group's influential chief theorist (whose notions on plagiarism, for example, underpinned Situationist détournement decades later), dominated the Belgian scene. Here, the large selection of Magritte's paintings reproduced includes some relatively unfamiliar early works (on loan from private and small public collections in Belgium) as well as many postwar pieces, some of which, particularly those from his so-called "cow" period, like late products by his peers Picabia and De Chirico, are fascinating but pretty odd. Nougé is represented by all nineteen anxious tableaux from Subversion des Images, his photo portfolio of 1929 (unfortunately minus his short-prose captions that accompanied the pictures when the piece was finally published in 1968). Other eye-opening, less widely known creations include collages by E.L.T. Mesens, objects by Marcel Mariën, and Raoul Ubac's solarized photographs. There's underwhelming work too, like the kitschy erotica of Paul Delvaux.

The commentary, much of which is adapted from Canonne's comprehensive, one might say already canonical (ha!), Surrealism in Belgium, 1924 to 2000 (published in both French and English versions in 2007), includes an overview of the movement, an annotated run-through of magazines and other documents (well-illustrated with jacket covers, and fascinating), and alphabetically-arranged chapters on each of the forty artists in the show, with plentiful selections of the work on exhibit.

For all sorts of reasons, surveys always have holes. In this show, for example, there's nothing by Marcel Broodthaers (perhaps it was too difficult to get clearances from his notoriously difficult estate?). There's also no Henri Michaux, though it's true he lived in France most of his life and had next to nothing to do with the movement in his home country. That Christian Dotremont, one of the co-founders of COBRA in the 1950s, is largely missing is more glaring; he's acknowledged in the overview and documents sections, but examples of his voluminous visual output, notably his distinctive, calligraphic logogrammes, are absent from the exhibit. And it’s disappointing that Pol Bury's cinétisations weren't included, and are mentioned in the text only in passing; these highpoints of Belgian visual art, from the 1950's and ’60s, were innovative photo-collages that used subtle shifts of concentrically cut circles to dizzying effect, a technique not even Jiří Kolář, the restless Czech montagist who invented rollage, crumplage, and chiasmage, hit on.

The translations in Surrealism in Belgium, The Discreet Charm of the Bourgeoisie are, alas, full of grammatical infelicities, and the bibliography could have been improved with citations to English-language works—to the many estimable Magritte monographs, for instance, or the few but precious translations of Nougé. Despite those things, this is a big, beautifully produced, informative attempt to make better known a peripheral and unfamiliar but worthy body of work.