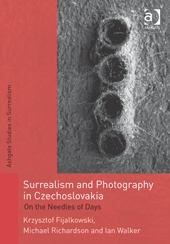 On the Needles of Days
Krzysztof Fijalkowski, Michael Richardson, and Ian Walker
Ashgate ($104.95)

Photography has been unusually fruitful for Surrealist artists perhaps for an obvious reason—in denaturing sight it exposes the unconscious of vision. The image “Paris Afternoon” by writer/collagist/photographer Jindřich Štyrský provides a powerful example by the simplest of means. On first glance this black and white picture couldn’t be any clearer: a somewhat overexposed image of spider webs in a basement. But any time spent peering at the photograph, as co-author Ian Walker does in his sharp analysis, makes it only less obvious:

It seems to have been made in an interior; there are cobwebs and what looks like broken furniture. But even that is in doubt given the unformed amorphousness of the image, which takes Štyrský’s fascination with degradation and disintegration a stage further than in his more direct photographs. Perhaps it is a collage or maybe there is some solarisation. One may even suspect that part of the image’s effect is caused by damage to the negative . . .

Even when Walker reveals what Štyrský has actually done, the essential mystery remains intact. Taking a cropped image of the interior of a crypt, Štyrský rotated it ninety degrees clockwise. We know the technique, but the photograph is no less strange and now all the odder in its arbitrary twist. It is as concrete and irrational as Dalí could have wished.

Each of the photographers in this concise and pleasurable collection of essays explore sight in deep and subtle ways, taking us well beyond Lotar’s abattoirs or Boiffard’s big toe (which can seem a bit obvious in retrospect). Štyrský is among the most famous, and justly so, with his series On the Needles of These Days providing the book’s subtitle. That work presents his photographs of window displays, religious iconography, and peculiar objects to which Jindřich Heisler’s poetic text stands in “precarious” relation. In them we find the “entranced examination of the everyday” by which Petr Král characterized the approach of the Czech circle. It was and is a “daylight surrealism.”

Those who followed Štyrský offer much to explore: In a brief 182 pages the authors discuss the work of eighteen artists over a period of eight decades. Emila Medková is certainly the stand-out among those less well known here and her scratched walls, coal chutes, and cancelled signs deserve a full-scale exhibition in a major U.S. museum. Her work documents the blocked lives of Communist-era Prague by means of tightly cropped, straight-on photographs of street objects haunted by their own suggestiveness. Vilém Reichmann’s series Wounded City, which he completed after the end of World War II among the ruins of his hometown Brno, is a more immediate record of trauma and embodies André Bazin’s comment that photography is “a hallucination that is also a fact.”

The authors all have deep backgrounds in the study of Surrealism and photography and their contributions weave together in seamlessly in this short work. Unfortunately the book’s high price will prevent many from enjoying their contribution to the history of photography, but those who read it will find its pages “very rich for eyes.”