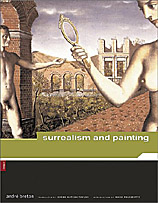 Autumn 2002 saw a strange conjunction in the art world. In November, it was announced that André Breton's collection of Surrealist and indigenous paintings and objects would be put up for auction. Coincidentally, the publishing arm of the Museum of Fine Arts in Boston had just weeks earlier announced its republication of the long-out-of-print English translation of André Breton's masterful book Surrealism and Painting. Readers of English once again have access to that important volume, though its availability has sparked very little fanfare; the sale of the contents of Breton's 42 rue Fontaine home is apparently accorded far more worth than the work of the man himself and the ongoing efforts of the Surrealist movement which he founded.

While Surrealism and Painting is not "about" Breton's collection, the essays concern many of the elements and artists represented in it. By placing the book's new availability in the context of the so-called "Breton auction" I hope to illuminate the interplay between established critical views of Surrealism, the press, and this collection. Collectors and critics are newly interested in "classic" Surrealism—pre-1945 Surrealism—largely in terms of its influence on contemporary big-ticket artists. This interest is partly what had forced the sale itself, by driving up the insurance premiums on Breton's collection to a level untenable to its caretaker, Breton's daughter Aube Elléouët. How symptomatic of the peculiar myopia of criticism that so much attention should be paid to the value of the "artifacts" of classic Surrealism, and that this attention should take place almost completely in art history's star chamber!

Except for Mark Polizzotti's introduction, this new edition of Surrealism and Painting is the same as the 1972 version of the English translation, put out by Harper & Row, based on an expanded 1965 French edition of the original 1928 work. To grasp its true worth we must turn to the text, attending to the author's arguments and examples, ignoring the approved commentary.

The need to fix visual images... has led to the formation of a veritable language which does not seem to me any more artificial than spoken language, and about the origins of which it would be fruitless for me to speculate. At the very most, I owe it to myself to weigh the present state of this language in exactly the same way that I would weigh the present state of poetic language and, if necessary, to recall it to its true principles.

Note Breton's emphasis of the unity of poetic language and visual language. In this, "eye" and "tongue" are linked; the recognition of painting as a form of poetry, and of poetry as a form of universal human action, have always been key elements of Surrealism. That "savage state" is also essential, with the characterization "savage" being stripped, in Surrealism, of its pejorative sense. For Breton, the true principles of visual language, and spoken language, are poetic, and therefore, by means of contrast with "civilized" language, savage—undirected, dreamed, automatic perhaps; certainly spontaneous. I'll return to these "true principles" momentarily. For now, let's say that for visual images to be able to form their own spontaneous, poetic language, those who make them must work with an understanding of the universality of poetic experience, and must be allowed to go where this leads them.

These poetic obligations contribute nothing to the notion that the destiny of the work of art is to be sold, then displayed in a museum, and thus accrue monetary value. In fact, poetry (whether visual, verbal, or other) finds its truth only when the destiny of a work is absolutely irrelevant to its making; when the process is invaded by notions of time and "value," poetry and process both degrade and disappear into cliché and the facile. This is one major theme of Surrealism and Painting. Breton's experience with "professional" collectors and his intimacy with many visual artists showed him the woeful sequence again and again: innovation and excitement; recognition and self-sufficiency; stagnation and retreat into previously-approved methods and products.

This is why Breton devotes so much time and space to Picasso's work, implying that he is Surrealist in spirit if not in name, and recognizing that any appellation, even that of "surrealist," would limit Picasso's work. For Breton, Picasso was a Surrealist in that his visual language, at least at that time, had never left its true principles behind. If Picasso did not completely submit his work "to a purely internal model," as Breton argued was necessary for the plastic arts, he afforded the internal model at least as much weight as the external. He also remained an innovator and a risk-taker for most of his artistic life. To recognize this constant innovation took a certain perceptiveness, a certain contagious enthusiasm, which Polizzotti in his introduction interprets as hero-worship or wishful thinking. Candor and effusiveness can be unsettling in a critical work, but they do not indicate an unrefined viewing. On the contrary, Breton's eye, savage and refined, saw in Picasso an honest adept of the poetic experience, one whose creative outpouring broadened the realm of the possible and the marvelous.

Practically speaking, poetry is art and art is poetry—it comes down to a simple choice of medium, materials, and method. It could be said that the real job of art history and criticism is to justify why this or that art work has been sold, while the job of the critic or historian of poetry is to explain why poetry can never sell (while loudly declaiming its deep spiritual importance). In neither case does either type of interpreter seem to care much about the things which fall outside their training. Picasso, while we're on the subject, was also a fine poet, but this is not well-known, nor is Breton particularly celebrated for his ironic, gorgeous collages and assemblages. Perhaps this is because written poetry is of little commercial interest to art dealers, and because Breton's visual works were created mainly as gifts, not intended for sale. What is considered valuable by interpreters of creative output determines what said interpreters present as valuable to those outside their field of familiarity. Through the narrow focus of study, they have cut the surrounding panorama from the frame, showing instead a single stone at the edge of a forest.

What André Breton considered valuable examples of visual poetry—of pictorial Surrealism—does not always impress contemporary art historians. For every Yves Tanguy, Joan Miró or Pablo Picasso for the collectors to paw, there was a Maria Martins, a Degottex, a Toyen or an Hérold to be shrugged at and dismissed as "minor." Breton's intent, in the texts of Surrealism and Painting, was not to tell the privileged why they should open their wallets. Instead the goal was to expose his readers to works which were Surrealist by participation or by affinity (such as works by "autodidacts" like Henri Rousseau and by the institutionalized mentally ill), and thereby further define or exemplify the changing parameters of one form of Surrealist action. Sometimes his clarifications did not actually make matters clearer, and he did contradict himself occasionally. In the 1942 essay on Tanguy, for example, he delineates painting and poetry into separate "spheres."

There is also the uncharacteristically reductionist label of Surrealism as an "art movement" in the 1944 essay on Enrico Donati. While this might be passed off as a translating error, I believe it was deliberate on Breton's part, though not done by choice. Because of its date, I would suggest that this description of Surrealism came from the injunction under which Breton was granted temporary asylum in the U.S. during the second World War: no revolutionary politics allowed. We have the State Department to thank for this additional confusion. Still, the initial paragraph of that essay deserves extensive quotation for its relevance today:

The almost total bankruptcy of the critical spirit which is a mental characteristic of wartime periods has again registered profound effects on the development of the arts and the interplay of ideas involved in that development. For several years now, we have been obliged, willy-nilly, to live in an unremitting atmosphere of edification, each of us supposed to bear witness to the great good that is being accomplished by the paradoxical means of carnage and destruction. The coercive powers which effectively control the world today, not content simply with taking lives, demand also that we should one and all sacrifice our basic standards of intelligent judgment: the journalists have taken it upon themselves to bring the intellectuals to repentance.

Indeed. Breton's work, his collection, and his right to speak for himself are still in the grip of "coercive powers."

The Gold of Time in the Time of Gold

Fast forward: in June, 2003, Art in America includes a tiny mention of the disruption of the Breton auction by "latter-day and would-be Surrealists." The headline: "Breton Auction Breaks Records." The piece itself is misleading, attributing the widely-circulated petition against the sale (and calling on the French government to buy and administrate the collection) to Surrealist protestors. In truth, the French Surrealist group boycotted the auction and had nothing to do with the disruption mentioned in Art in America. Instead, Surrealists issued statements against both the sale and the petition. Entitled Surrealism Is Not for Sale! The Gold of Time in the Time of Gold and Who Will Embalm the Embalmers? these statements are factual as well as political, explaining how the collections came to be placed on the block, correcting journalistic errors concerning the sale and the Surrealist movement, and clarifying the position and qualifications of the "Breton Committee."

The mysterious exclusion of these documents from the "official" discourse on the auction and Breton's work can be explained by one simple fact upon which all parties, regardless of motivation, are likely to agree: The statements do not fit within the established art history or art market paradigms. What is outside a paradigm does not completely exist to those within it. When Surrealism speaks in its native tongue its colonizers show their disapproval by mocking, "interpreting," or pretending not to hear.

External commentary has disproportionately determined the popular conception of the Surrealist movement. Interpretation takes the place of experience, and allegedly disinterested discussion is given more weight than the movement's continuing discourse. Bound and gagged, its naked throat is forever on the block. Reduced from a distance to a series of totems, André Breton and the Surrealist Movement are at even greater risk of being seen as nothing but chapters in art history and "rooms" in government-endowed collections. All those who want to prevent this kind of entombment should explore the great, slow-beating heart of Surrealism and Painting on their own, and let Surrealism speak for itself.