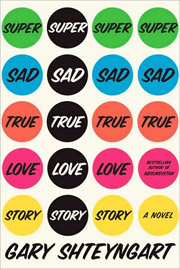 “By reading this sign you have denied existence of the object [the tank] and implied consent.” This sign welcomes the protagonist of Super Sad True Love Story, a Jewish-Russian-American with Ashkenazi eyes and a penchant for Asian girls, back to the U.S. of the American Restoration Authority. In this phrase, Gary Shteyngart distills the essence of our potential, frightening and manically laughable future.

As is evident from this and his previous books, Shteyngart, who was born in the old Soviet Union, is a master stylist and master satirist—a mixture of Juvenal, Gogol, and Babel updated for the 21st century. Add Orwell to the mix and you can get an idea of this new book’s appeal.

Though satirical and dystopian, however, this novel is not quite like 1984—it’s funnier, it’s ethnic, and it’s way over the top. Straight lines are bravely extended from yesterday into the day after tomorrow. Everything is blown up to absurd proportions. From corporate mergers to LandO’LakesGMFordCredit. From smart phones to apparat. From all-too-familiar humiliation at airports to body cavity searches everywhere (only foreigners who buy triplexes for 20 million Northern Euros are exempt). From Iraq to Venezuela. From Rumsfeld to Rubinstein. The dollar is Yuan-pegged. The apparat projects your credit ranking and your fuckability for the world to see. Ads call for the Chinese to spend and for Latinos to save.

As the title promises, Super Sad True Love Story is soaked in super-duper, in your face, overstated sadness. Its sadness transcends the pervasive melancholy of its protagonist, a self-admitted, certified loser if ever there was one. This sadness has a palpable quality; a reader is ready either to punch the protagonist or to cry for him. His love interest does both.

Everyone and everything is sad in this novel, not only the protagonist. His Korean girlfriend, whose unglorious handle is Euni-Tard, who minors in Assertiveness, who comes from a dysfunctional family, who is super angry, who dresses in JuicyPussy clothes, who speaks in texting abbreviations (e.g., TIMATOV, ROFLAARP, PRGV), and who spends her time shopping online at AssLuxury via herapparat. The protagonist’s boss, a rejuvenated septuagenarian, who competes with him for said sad girlfriend. The protagonist’s friends, who are only concerned about their ranking. His aging neighbors, dying a slow death. The entire United States, run by corporations like the above-mentioned LandO’LakesGMFordCredit, and by the above-mentioned American Restoration Authority, which operates under the logo “deny and imply” and where everyone suspicious is sent to the “secure screening facilities” upstate.

To the author’s credit, this universal sadness is contagiously hilarious and framed in truly gorgeous language. “I turned away from Ms. Abriella’s beautiful seagull-shaped lips as if slapped, and let death wash over me, the corned-beef smell of my damp neck giving way to an old man’s odor rising from my thighs and armpits like steam.”

But when the author gets into the lyrical instead of satirical, his prose sometimes runs out of juice or becomes too juicy. Take this passage when the protagonist—incidentally nicknamed Rhesus Monkey—is about to make love to his, ahem, true love, the Korean girl whom he has just met: “I . . . cupped the twin, tiny globes of her ass with my palms.” Sadly, this super sad cliché about the human butt permeates romance literature.

Likewise, when the protagonist fails to develop an erection (it doesn’t help that his love refuses to take off her bra because her chest is too flat) and he spends the rest of the night between his beloved’s legs, he declaims: “I licked and licked, breathing in the slight odor of something authentic and human.” Human? What did he expect?

But often even his lyrical order is gorgeous: “How to contain the natural reflex to stand up on one’s hind legs and sniff poignantly for the warmth of the sun? How to keep one’s mouth from funding Eunice’s and burrowing inside?”

Meanwhile, the world falls apart around the true lovers. After a decidedly non-Christian Rapture, the American Restoration Authority is replaced by the rule of a private company, Nassau warlords are fighting Queens warlords, and the entire country is divided between foreign sovereign funds. Worse yet, the lovers part and no amount of kneeling and pleading (that’s how Rhesus Monkey kept his hold on his love) helps. Sad news for America, sad news for the protagonist. Even his girlfriend is mildly sad.

We can only hope that this uniquely portrayed dystopia is not going to become the American truth. And as for love in this story, IMHO, it can be characterized as bizarre. Nothing is wrong with bizarre though. Gary Shteyngart makes bizarre funny, thoughtful, energetic, and even page-turning. Despite its charming faults, Super Sad True Love Story is one of the best—and scariest, despite its humor and inept protagonist—books I’ve read in the long time.