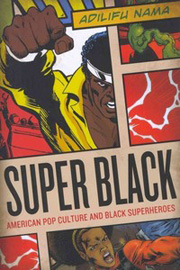 One Christmas, Bill, my brother, seven years my senior, bequeathed me his comics collection. Although born out of necessity—he had run out of available funds before it came time to buy me anything—it was the best Christmas present I’d ever received. I spent the next few months enraptured, reading comic after comic from the early to mid ’80s, falling in love with Spider-Man and The X-Men(we were a strictly Marvel house), thinking uncomfortable thoughts about Kitty Pryde and Mary Jane, reading the multi-issue crossovers again and again.

Out of all of the characters, team-ups, and series, I was particularly drawn to Power Man and Iron Fist, in which the nigh-invincible African American Luke Cage (that’d be Power Man) teamed with Danny Rand, a white guy who had been raised to be a badass zen warrior by aliens in the mystical city of K’un-Lun. Of course I loved them: I saw Bill and myself in them. Bill was black, I was white. Bill was the toughest kid I knew. I practiced martial arts. Playing out in the pages of Power Man and Iron Fist and in events like Secret Wars, I saw a utopian vision of how the two of us could get along despite the gulf in our ages and races and non-comic book interests.

As Adlifu Nama discusses in his fascinating, frustrating Super Black: American Pop Culture and Black Superheroes, he (and countless other kids) had a similar moment in the 1970s, when he discovered the superhero Falcon, “a black man that could fly.” The first critical survey of black superheroes, Super Black takes Nama’s childhood passion and examines it through cultural, historical, and critical lenses. In its pages, you’ll meet the aforementioned Luke Cage alongside African prince Black Panther (created right before The Black Panther Party began in Oakland), Black Goliath, The Black Lantern, Cloak from Cloak and Dagger, Black Lightning, Storm, Misty Night, Steel (aka John Henry), and even Barack Obama.

Throughout, Nama takes a refreshingly nuanced approach to his subject. It would be all too easy to point to the black characters created by well meaning white liberals in the late ’60s and early ’70s and see nothing but problematic, condescending, ham-fisted portraits of African American life. Nama complicates the black superhero by also seeing the ways that they put issues of post-colonialism, race, poverty, and identity struggles front and center in the comics they graced. Writing about Black Lightning, Nama comments that:

Despite his nearly laughably disco-chic look and the embarrassingly awkward black jargon Jefferson adopted when he became Black Lightning, he articulated a serious set of class and racial politics. Jefferson Pierce was a striver, a black guy who fought his way out of ghetto squalor to become an accomplished athlete, a successful educator, and, finally, a ghetto superhero. Black Lightning’s upward-mobility narrative registered subtle elements of Black Power politics concerning self-determination and black social responsibility, but his black middle-class status was also a source of multiple anxieties.

It’s this kind of complex take that is the book’s core virtue. Nama refuses to simply laud or take offense at the various and evolving black superheroes over the past few decades, instead showing how something could be both groundbreaking and condescending at the same time. He shows once again that nothing ages worse than yesterday’s progressivism.

Within the book’s subject we witness the intersection of two different kinds of symbolic characters, and Nama is adept at excavating the representational meanings hidden therein. Superheroes, after all, always stand for more than themselves (he ain’t called Captain Americafor nothing) and African American characters—particularly when they are invented by white writers and intended for white readers—seldom are allowed to exist as individuals. Thus, writing about Todd McFarlane’s Spawn, a reluctant enforcer for the Devil who spends his time viciously murdering evildoers so that Hell can have some more souls around, Nama comments that “Spawn is a cipher used to examine despicable acts of depravity and act out gruesome acts of vengeance too dirty, too stigmatizing, and too unsettling for white superheroes like the Mighty Thor or Superman to address.” He also devotes an entire chapter to the fascinating subject of black heroes who were initially conceived of as race-reversed knock-offs of major properties, including Steel (the black Superman), Black Goliath (there was a white Goliath), and Wonder Woman’s short-lived black identical twin Nubia (!!!).

It’s too bad, then, that this insightful book on this interesting topic is written for an academic market that insists on squeezing all life out of the writing it produces. This problem—that the kind of writing that would actually make Super Black appeal to people outside of university circles would also make the book anathema to academic committees everywhere—affects the book both structurally and on a sentence level. It’s impossible to imagine a general-interest treatment of this subject that included not one interview with or piece of biographical information on the characters’ creators or subsequent writers, but with academe fully confident that the author is dead, such moves have become verboten.

Super Black is, to a limited extent, trying to reach beyond the market of the University Press. Nama eschews sesquipedalian words and leaves most of the hardcore theory off the page, intentionally restricting himself to interpretations that a lay reader of comics would be likely to understand. He also leaves room for fannish kvetching about the quality of costumes various characters get. Still, the prose feels beaten into a kind of leaden repetitiveness and torqued into awkward constructions. The words “arguably” and “despite” begin at least one sentence on many pages, setting up classic “They Say/I Say” constructions, a tic that is particularly odd asSuper Black is the first book of its kind and thus no counterarguments to Nama’s points exist. Similarly, cultural context is often provided by writing “In films such as . . .” and then listing a title or twelve, and sentences like “Cloak is neither as elegantly drawn nor as fully fleshed out as Frank Miller’s definitive comic book noir rendering of Batman as a deeply conflicted superhero” abound.

Reading the book, it is hard not to imagine a better version of it, one in which Nama combined the stories of the writers and artists with relevant history of the industry to go along with his insights. A book, in other words, that mimics works like Simon Reynolds’s Rip It Up and Start Again! or Peter Biskind’s Easy Riders, Raging Bulls by infusing narrative and character into the criticism. Without this, readers less familiar with the works in question might be left wondering how Denny O’Neil and Neal Adams decided to be the first mainstream artists to tackle racial issues in comics, or who the late, great Dwayne McDuffie—a man more responsible than perhaps anyone for mainstreaming black superheroes—was. Perhaps in the future, Nama can push his studies of African American genre entertainment (his previous book is a study of race in Science Fiction) further, taking ideas forged in the academy and, through graceful prose and good storytelling, bringing them to the wider world.