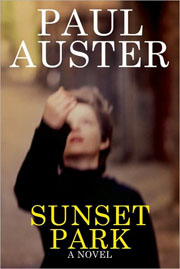 Though initially intended as a warning, the phrase “in these uncertain times” has developed into a parody of itself, a safety net for the rat-a-tat lingo of reporters and politicians discussing the troubles of America. Yet, the phrase itself seems to be little more than the admission of a constant reality, for when are times certain? At what point isn’t life a mystery?

Paul Auster has made a career out of pondering such questions, and in his latest offering, Sunset Park, he continues to thread them without falter into a pinball narrative set against the gloom-and-doom backdrop of the 2008 financial collapse. A tale of loss—both physical and emotional—the novel deftly chronicles the exploits of Miles Heller, a young drifter with an impressive pedigree (of which he feels ashamed), a secret tragedy (of which he does not speak), and an underage love called Pilar (the one person, as her name suggests, propping him up), as he finds himself marching both forward and back in life, stumbling into loss and redemption.

After a threat from Pilar’s older sister forces him to flee his southern Florida life as a “trash out” man of foreclosed homes (“the things, the innumerable cast-off things left behind”), Miles heads to the Brooklyn neighborhood of Sunset Park, where he squats in an abandoned house and counts the days until Pilar’s eighteenth birthday, a day he can safely—and legally—return to her, a stretch he considers nothing less than a prison sentence. Here we are introduced to his supporting cast. There are his roommates: Bing, the gregarious ringleader, a drummer who owns a repair shop specializing in obsolete technology; Ellen, a confused real estate agent who wants to be an artist but is afraid of failure and her sexual past; and Alice, a Ph.D. candidate completing a dissertation on male/female relationships in post-World War II cinema, specifically William Wyler’s 1946 “servicemen come home” drama The Best Years of Our Lives. Then we have Miles’s parents: Morris, a Manhattan publisher trying to keep his company afloat while saving his second marriage, and his estranged wife Mary-Lee Swan, an actress past her prime, performing as Winnie in Samuel Beckett’s Happy Days. And finally there’s Bobby, Miles’s dead stepbrother—the reason for his loner persona and a constant memory that haunts him to no end.

Mary-Lee’s presence in the city at the same time as her son is coincidence, as is Morris’ happening to visit Florida on the day that Pilar and Miles first meet. It’s these moments of kismet that make Sunset Park an intricate pleasure to read. Add in the vast amount of seemingly innocuous tangents-turned-metaphors that pepper the text, and each page becomes a kind of map, offering directions to the core of both events and character. It isn’t long, for example, before similarities between our modern cast and the lost veterans of the Wyler film begin to emerge (“What war did Miles Heller march off to,” Alice wonders at one point, “what action has he seen, how long has he been away?”), nor is it merely happenstance that Miles is sleeping in a room once held by a woman with a similar name, Millie, Bing’s ex-lover.

As interesting as they are, these tangents threaten to become tangles, snares that keep the reader at arm’s length in Sunset Park’s closing pages. As Miles finally takes the steps necessary to face his troubles, and as his fellow squatters fear the day they will be caught and scattered from their makeshift home, we are ping-ponged between characters, often left to learn of major events in afterthoughts and conversations. In reading these passages an inevitable question arises: Instead of explaining the purpose of, say, the PEN American Center (as a human rights organization, it fits comfortably into Auster’s “artist without home” theme), wouldn’t the author have been better off closing some narrative gaps in the lives of Mary-Lee, Bing, or Alice? As it stands, they unfortunately become lost in Sunset Park’s shattering conclusion.

Of course, this distribution of information—or lack thereof—could be Auster’s ultimate intention. Following in line with his last novel, the brilliant Invisible, these characters aren’t meant to be simple. They’re the product of our “uncertain times,” residents of a place where people come and go, where luck is temporary, and where stories often conclude without ending at all.