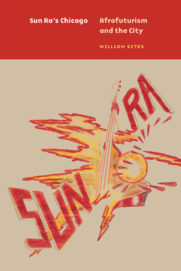 Listening to Sun Ra’s “Brainville” throws its listener into a complex time and urban space. Bop laid across swing narrates a mid-century Chicago’s urgent, sudden growth against a backdrop of hard, memoried violence. This is iced-out art that is neither Mies van der Rohe’s glassy towers nor Duke Ellington’s Harlem. As William Sites notes in Sun Ra’s Chicago: Afrofuturism and the City, “Brainville” offers a thoughtful, jagged tomorrow-city. Unsettling the listener, the piece’s disparate sounds swing and jump the tracks, “operat[ing] as musical gestures toward the beyond.” Sun Ra’s Chicago is a utopia recalled, projected, and performed; as the bandleader himself would later describe his ensemble’s vision, “IMAGES AND FORECASTS OF TOMORROW / DISGUISED AS JAZZ.”

Sites’s project in this work is to get back to this future city by understanding Sun Ra’s geographic, intellectual, and galactic journeys. As Sonny Blount, Ra traveled from Birmingham in 1946, plying his keyboard trade in a string of strip clubs in Calumet City, a southern suburb of Chicago. He engaged the full range of Chicago’s bubbling musics, including swing, bop, pop, blues, and gospel. Growing as a bandleader, he developed associations with other musicians and thinkers, significantly through verbal sparring with other soapbox philosophers in the South Side’s Washington Park. In 1952, he petitioned to change his name to Le Sony’r Ra. He gathered musicians into ensembles that would eventually become his Arkestra, honing its sound in a range of itinerant South Side spaces before ultimately ending up in New York. As Sun Ra, he claimed origins on the planet Saturn and sought to clarify a utopian artistic vision—“the thought of a better, untried reality,” as he described it in liner notes for Jazz in Silhouette.

This vision reflects Sun Ra’s imaginative journey, according to Sites. These geographies redraw the map of the Americas and extend African space, “a set of backward-facing, forward-moving journeys through black utopian worlds still in formation.” Offering a new map to the country, they move beyond standard depictions of Chicago’s “Black metropolis,” instead seeking “to perform utopia as everyday practice.” Sun Ra’s ensemble offered its hearers spaces “where new collective identities could become present, there might mingle with here.” Music could both dismantle perceived, racialized boundaries and become a means of sounding fragmented experience. Sonic spaces in that here could become communally integrative, economically viable, and personally reaffirming. Transit within and to that there would require musicians and hearers to re-sound perceived localities. Sites writes that they could relocate origin and destination, setting out “from ‘nowhere here,’ as Arkestra members would chant in later performances . . . a secret, unfulfilled destiny.”

The central focus of Sites’s work is his chronicle of performances in Chicago venues like the Wonder Inn and Budland, a space carved within the Pershing Hotel’s basement. Viably navigating these spaces required artistic innovation and a redrawn map of Black experience in an urban setting. El Saturn, the enterprise that Sun Ra formed with Alton Abraham, was not only a recording label but also a “hybrid community enterprise . . cultural laboratory . . . [and] a vehicle for exploring the city—or, more precisely, the city beyond the city.” Sun Ra created a wider, sonic there, redefined within a confined and cornered here. In this powerfully re-imagined transit, the South Side became one more edge of Africa, with Saturn itself appearing as just one more stop along an expansive journey through space. According to Sites, Sun Ra’s sonic project “endowed his city’s streets and trains with a double existence . . . [offering transit] to somewhere else.”

Most pressing for Sites are cities’ impact on Sun Ra’s imaginative geographies. Juxtaposed against the oft-invoked “city on a hill,” Sun Ra’s vision is of a distinct, urban utopia sounded within a “new cultural infrastructure,” a vision for “how urban spatial mobility, imagined through musical expression, might transport listeners beyond the segregated confines of the known city.” This vision resides in a Chicago that has moved beyond the post-fire sprawl of the 1893 World’s Fair “White City,” a Chicago redefined by decades of Black migration from the South. The city is on the cusp of becoming “the Daleys’ city,” marked and surveilled along (re)financed, gentrified, and racialized boundaries. Chicago was already bleeding population and work to the suburbs. Many articulations of Black experience in Chicago reflected the sense of redefined place and power in the “Black metropolis,” the “city within a city.” Concurrently, appropriations of the disruptions of the “inner city” had already begun to resound in city politics. Sun Ra’s artistic venture becomes a perspective to “recognize from a distance the cruel absurdity” of city life. Offering sonic refuge, it resituates Chicago within a wider Black journey.

Sites’s considerable skills as an urban cartographer help to further remap Chicago. He writes that Sun Ra sought “to question the city as it appeared and to glean the possibility of another one beyond it.” He details the networks, cultural ecologies, and hybrid organizational forms that the bandleader established in opposition to the South Side’s entrenched, racial boundaries. Sites also explores the legacies of the Thmei Research artists of Chicago’s Washington Park, who articulated a vision of urban space that is contrary to others from that historical moment, including those posed by International Style architects, commercial interests selling the “pastoral suburb,” and even Hugh Hefner’s “ultra-urban fantasy” of his Playboy Town House. In Sun Ra’s sonic reappropriation of the lines between here and there, “Space . . . was not merely container or connector but a veil, stage, springboard, crucible, gateway, and vehicle. Generative and dynamic.”

In Sites’s analysis, Sun Ra’s work continues to rethink the U.S. city beyond misappropriations of it as an “increasingly left-behind, ‘post-urban’ [space].” It is a city of recovered neighborhood, a “utopia itself not as a singular, fixed territory or location but as a spatial array of possibly configured places.” As Sites argues, Sun Ra’s utopian vision opens a means of grasping the range and locale of visions for “African American space that [is] heterogeneous, fluid, expansive, and open to visitors.” In our moment, Sun Ra resounds within a renewed, unwalled Black metropolis, echoing “hidden sounds . . . heard as the shadowed reflection of another, future world.”