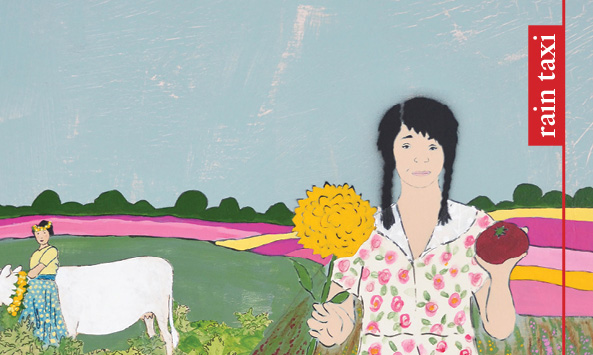 To Break the Silence: An Interview with Kim Echlin
Canadian author Kim Echlin discusses her recent novel Speak, Silence, a fictionalized account of the Bosnian women who testified at The Hague about their experiences of crimes against humanity.
Interviewed by Allan Vorda

How I Became the Narrator of a César Aira Novel
Argentinian novelist Cesar Aira’s latest work in English translation, The Divorce, is now available from Chris Andrews and New Directions. In this personal essay, Kent Johnson offers a behind-the-scenes exploration of Aira’s aesthetic.
Essay by Kent Johnson

Works by Paul Celan: Memory Rose Into Threshold Speech and Microliths They Are, Little Stones
Two new translations bring Celan’s early poetry and much of his prose to English via the heroic efforts of translator Pierre Joris. Review by John Bradley

Nancy
Bruno Lloret
A speculative and poetic first novel, Chilean writer Bruno Lloret’s Nancy comprises the deathbed recollections of its title character, a widow who is dying of cancer. Reviewed by Austyn Wohlers

Cathedral
Ben Hopkins
A monumental debut novel, Cathedral constructs an edifice whose design ranges from the most sublime heights of inspiration to the most degenerate political depths, all of them counterbalancing each other to maintain their intricate facades. Reviewed by David Wiley

The Bass Rock
Evie Wyld
Evie Wyld is an author and bookshop owner in London whose latest novel, The Bass Rock, follows three women on the coast of Scotland over centuries. Review by Josh Steinbauer

PUNCH
Radoslav Rochallyi
Slovak poet Rochallyi’s mathematical poetry is not only a critique of language, but also a beautiful, direct confession that tears up the metaphysical ambiguity of life. Reviewed by Andrea Schmidt

Kontemporary Amerikan Poetry
John Murillo
In his second collection of poems, Murillo reflects on coming of age and making sense of poetry while acting as a conduit for the experiences and realities of many Black Americans. Reviewed by Chaun Ballard

Voir Dire
Nico Vassilakis
A pleasure to read, this collection of poems captures the delight in Vassilakis’s unpretentious, witty, and self-effacing practice.
Reviewed by Tyrone Williams

Kamala’s Way: An American Life
Dan Morain
Although political experiences are recorded in it, this is not really a book about politics—instead, it is about a woman with a talent for getting around closed doors. Reviewed by Mohd Yaziz Bin Mohd Isa

Artists in Residence
Seventeen Artists and Their Living Spaces, from Giverny to Casa Azul
Melissa Wyse and Kate Lewis
After emerging from months of lockdown, it’s interesting to see how artists like Frida Kahlo and Hassan Hajjaj shape their domestic and work spaces. Reviewed by Linda Lappin

Brazil That Never Was
A.J. Lees
As recounted here, a successful British neurologist becomes so incredibly involved in a childhood fantasy about a country far away that he simply has to take a voyage into the Amazon. Reviewed by Douglas Messerli

Yours Presently: The Selected Letters of John Wieners
Edited by Michael Seth Stewart
and
Momentous Inconclusions: The Life and Work of Larry Eigner
Edited by Jennifer Bartlett and George Hart
The worlds of poets John Wieners and Larry Eigner, both essential Black Mountain writers, are more deeply fleshed out in these two new books. Review by Patrick James Dunagan

Permanent Record (Young Readers Edition): How One Man Exposed The Truth About Government Spying And Digital Security
Edward Snowden
This recently released young readers edition of Snowden’s 2019 memoir cuts out all the adult “smut,” leaving a hero’s tale with all the stuff kids love in a book—adventure, fighting tyrants, young love, and moral homilies. Reviewed by John Hawkins