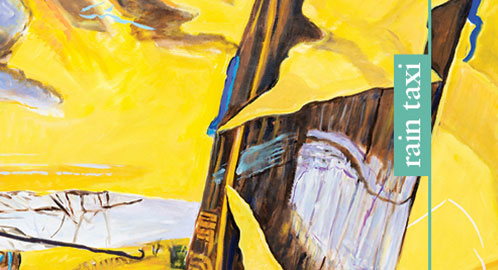 Poetry Flowing Everywhere: An Interview with Trapeta B. Mayson
The City of Philadelphia’s current Poet Laureate, Trapeta B. Mayson is a Liberian-born poet whose work focuses on the political and personal immigrant experience.
Interviewed by John Wall Barger

Poetry Breaks Through the Silence:
A Conversation with Ed Bok Lee and Steve Healey
Two Twin Cities poets discuss their recent books and how they both explore fatherhood and family experience in starkly personal ways.

Friendship is a Blank Canvas: An Interview with Rufi Thorpe
Rufi Thorpe discusses the inception of her newest novel, The Knockout Queen, which revolves around themes of female friendship and violence. Interviewed by Zhanna Slor

Language Is Never Static: An Interview with Su Hwang
Su Hwang discusses her debut collection of poems, Bodega, which poignantly considers how every interaction between people is freighted with history and tied to identity.
Interviewed by Michael Prior

If it ain't a pleasure, it ain't a poem:
A Conversation between Dobby Gibson and Matthew Rohrer
In a testament to poetry and friendship in these troubled times, two poets enjoy a long-distance conversation about poetry of the ages and life during quarantine.

Bleach or Pinot Noir?
Susan M. Gaines and Jean Hegland in Conversation
Two writers unexpectedly became roomies during the pandemic lockdown, and they reflect on their experience in a weeks-long conversation.

The Melancholy of Maturity:
Translation and Adaptation in Normal People, The Story of a New Name, and Unorthodox: The Scandalous Rejection of My Hasidic Roots
As television series based on books by Deborah Feldman, Elena Ferrante, and Sally Rooney demonstrate, adaptations of translated works have more interest than ever in calling attention to their roots outside the American mainstream.
Essay by Sarah McEachern

Pandemic Reflections on Girl in A Band by Kim Gordon
Kim Gordon’s 2015 memoir is helping one reader get through the 2020 plague in the way that Punk’s attitude was born to do, achieving strength from a position of weakness with honesty and compassion.
by Sean Smuda

A User’s Manual
Jiří Kolář
Jiří Kolář was one of the great collage artists of the 20th century, and now we can enjoy his art work accompanied by his poetry in his first book-length literary work in English. Reviewed by M. Kasper

4:30 Movie
Donna Masini
Masini employs an ingenious scaffold to explore the illness and untimely passing of her sister. Reviewed by Bhisham Bherwani

My German Dictionary
Katherine Hollander
Hollander’s poems take us to Europe in the years between the two world wars, letting her imagination loose on history. Reviewed by John Bradley

Catfishing on Catnet
Naomi Kritzer
Kritzer tackles the worlds of tech and teens with Catfishing on Catnet, following her on-the-run protagonist Steph, whose only social life takes place in internet chatrooms. Reviewed by Aidan Bliss.

Light it Up
Kekla Magoon
In her follow up to How It Went Down, Magoon revisits the aftermath of the death of sixteen-year-old Tariq Johnson by police. Reviewed by George Longenecker

Be Not Far From Me
Mindy McGinnis
This woman versus the wilderness narrative is a fast-paced ride, following Ashley as she fights for survival alone in the perilous Smoky Mountains. Reviewed by Olivia Vengel

Are Snakes Necessary?
Brian De Palma and Susan Lehman
In this collaborative debut novel, filmmaker Brian De Palma applies his cinematic stylism to pulp fiction, with all the silliness that implies. Reviewed by Joseph Houlihan

Agency
William Gibson
Refusing to give the reader a moment’s respite, Agency is a 400-page car chase resting atop a giant mound of metaphysics and gender politics. Reviewed by William Corwin

Dead Astronauts
Jeff VanderMeer
The latest novel from VanderMeer, Dead Astronauts is a gorgeous volume that engages the reader, pushes boundaries, and challenges convention and features an exciting cast including foxes, salamanders, and more. Reviewed by Michael MacBride.

The Case Against Reality: Why Evolution Hid the Truth from Our Eyes
Donald Hoffman
Cognitive scientist Donald Hoffman builds a case for creating a synthesis of science and spirit that more accurately represents human existence. Reviewed by Quinton Skinner

Conversations with William T. Vollmann
Edited by Daniel Lukes
This collection offers readers an illuminating portrait of the enigmatic writer through articles and interviews from 1989-2018 that often temper wild assumptions with even more stimulating truths. Reviewed by Chris Via.

News from the Infrathin: The Work of Marchel Duchamp

Marcel Duchamp: The Barbara and Aaron Levine Collection edited by Evelyn C. Hankins
Marcel Duchamp and the Art of Life by Jacquelynn Baas
Two books delve into the complicated work of the mischievous genius Marcel Duchamp, a defining figure in the art world whose works cast a far-reaching shadow. Reviewed by Patrick James Dunagan

Duchamp’s Last Day
Donald Shambroom
Duchamp’s Last Day highlights how, up until his very end, Duchamp placed substantial emphasis on gaiety and irreverence, turning his own death into a work of art. Reviewed by Jeff Alessandrelli

Essays One
Lydia Davis
As this new compendium demonstrates, to read Lydia Davis at any length is to be startled, jangled, entranced, and sometimes slightly annoyed.
Reviewed by John Toren

A Voice of the Warm: The Life of Rod McKuen
Barry Alfonso
Barry Alfonso tries to separate fact from fiction in this biography of the strange, self-conflicted, and tragic figure that was singer-songwriter-poet Rod McKuen. Reviewed by Walter Holland