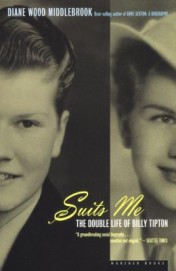 Billy Tipton played many roles during his 75 years: devoted father, supportive husband, businessman, jazz musician, promoter. He played them so well, in fact, that it wasn't until his death in 1989 that his great secret was revealed: he was biologically a woman. If it came as a surprise to friends and business partners in eastern Washington, where he lived most of his life, it was an even greater surprise to his five ex-wives and three adopted children. Diane Wood Middlebrook's new biography, Suits Me: The Double Life of Billy Tipton, charts his development from a conventional girlhood in Oklahoma City, through his career as an itinerant jazz musician, and finally to his adoption of a full-time male identity and life as a family man in Spokane, Washington. In addition to documenting the construction of an individual gender identity, Suits Me also details the complex ways in which gender is located and conditioned within society.

Tipton initially assumed a male identity as a way to secure work as a singer and musician. At first, she was accepted by fellow musicians as a cross-dresser. But after she left Oklahoma City to become a traveling jazz musician, she began to assume a male identity on and off stage. Middlebrook speculates that this traveling life probably led to numerous relationships and one-night-stands with other women, though evidence from this period is scant. Undeniably, however, Tipton's years of travel and impersonation gave him the skills necessary to successfully pass as a man, both in private and in society.

Far from being resentful of his deception, Tipton's ex-wives have universally acclaimed his skill as a lover and husband. If it seems incredible that they did not know of his secret, they explain that Billy found creative ways to protect his physical identity. Compulsively private, he kept the bathroom door locked and the bedroom lights off. He was sexually dominant and refused to be touched. He wore chest bindings, he said, because of an unhealed rib injury. Straps that probably held a prosthetic device were also explained away as medically necessary, and were always hidden within underwear. However, the greatest force that protected his secret might have been the deep love that his wives seem to have felt for him. Although Betty Cox, Tipton's wife from 1946 to 1953, was "disturbed" to find out that her husband had been a woman, she nonetheless heralded Tipton as "the most fantastic love of my life."

Billy Tipton's last wife, Kitty Tipton Oakes, enlisted Middlebrook's help in unraveling his story. Middlebrook's biggest hurdle in drawing Billy's life was the paucity of existing source materials: few people kept his letters, and he left little documentation other than a few recordings and scrapbooks. Faced with this lack of material, Middlebrook was forced to invent or imagine significant events in Tipton's life. She prefaces her recounting of a pivotal moment in Billy's transformation into malehood as follows: "We will have to substitute imagination for the absent documentation. Perhaps it went something like this." Such undocumentable conjecture seriously undermines the book's value as a factual biography.

Suits Me might be more valuable as a study of gender construction than it is as a biography of an individual. Who was Billy Tipton? A lesbian who adopted a male identity in order to love women? A man trapped in a woman's body? A proto-feminist who manipulated gender in order to work in an exclusive, male-dominated field? Billy himself left few clues in this regard. His scrapbooks and letters, which never refer to gender issues, show him to have been concerned mainly with how he would be remembered as a musician. Though he has naturally been claimed as an early pioneer by feminists, lesbians, and transsexuals, such reductive assessments are ultimately unsatisfying. Suits Me leaves us with a complex and idiosyncratic figure who, despite great societal pressures to the contrary, was simply driven to become the person he wanted to be.