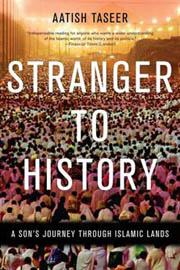 In this memoir and travelogue, a son wrestles with his father’s absence by travelling for eight months from Europe to Pakistan, through Syria and Turkey and Iran, compiling notes for a book. This book, tragically, was used to defend Taseer’s father’s assassination by one of his bodyguards, an extremist who justified his act because Taseer’s father, a prominent Pakistani politician and then Governor of Punjab, violated certain Islamic codes of behavior—he drank, for instance—and, while insisting on an identity as a “cultural Muslim,” he was not a believer in the truth claims of Islam. The younger Taseer recently wrote a piece for the Huffington Post discussing this, a piece that serves as an advertisement for the new American edition of the book, under review here. There is something awkward about that confluence of tragedy and commerce, and indeed, there is much that is awkward with this book, as Taseer insists upon reading his own struggles with cultural and religious identity alongside a weakly argued thesis that a similar struggle exists throughout the “Muslim world” he tours.

Taseer’s mother was an Indian Sikh with whom his father had an extramarital affair. When Taseer published a piece linking the turn to extremism among Muslim youths in Britain with an estrangement from identity, his estranged father contacted him in a harsh letter, telling Taseer that he did not understand what it means to be Muslim and therefore should not write on the issue. But what Taseer cannot understand—and, thus, one motivating factor for the quest that became this book—is his father’s atheist yet adamantly “Islamic” identity as a “cultural Muslim.” At the end of his journey and the end of this book, however, he’s no closer to such an understanding.

Along the way, he gives us whirlwind snippets of scenes so familiar as to be cliché—an underground party in Iran with the requisite illegal alcohol, for instance—distilling little more than platitudes from his various informants, turning scenes and situations that could have provided a forum for revealing reflections on Islamic identity into flat recitations of the already-known. To illustrate the level of squandered opportunity, here is an author with a tattoo of the Hindu god Shiva on his right arm who performs the Hajj pilgrimage; it is implied that the tattoo resulted from youthful drunkenness and that he kept it concealed during the Hajj. But Taseer doesn’t push farther than that. Reading this book, I felt like Charlie Brown, trying and trying to kick that football, to gain some satisfaction of new insight—but the author, like Lucy, sets it up only to yank it away.

There are far better books wrestling issues of Islamic identity, even mixing autobiography and travelogue. Abdellah Hammoudi’s masterful A Season in Mecca represents the philosophically hyper-reflective end of this spectrum; Michael Muhammad Knight’s Journey to the End of Islambrings the verve. Both offer more depth of insight into questions about Islamic identity in a single chapter than Taseer does in his entire plodding book. And both are acutely aware that there are multiple Islams, regardless of (multiple, conflicting, culturally contingent) doctrinal claims (and desires) to the contrary. What Taseer gives us is an Iranian commenting on how folks there “suffer from a kind of schizophrenia,” switching between the legally enforced codes of the street and their private—if illegal—lives. Or the platitudinous comment that Wahhabi theology stands in contrast to “places of music, dance, amulets and comparatively tolerant, flexible doctrines.” Or a talking head in the wake of the Danish cartoon controversy explaining why Jews and Christians, if they were true to their religions, would likewise be offended by representational art. It’s simply not enough.

There are worthwhile moments in the book, such as a scene, from childhood, where Taseer is mocked by relatives on his mother’s side for being circumcised. This, with reflection and expansion, could have made a terrific magazine piece. Here it becomes mainly another signifier for the confusion of identity Taseer feels: is he a Muslim, he wonders? Is his atheist father? And if so, how? Ramblings about “real Islam” and “real faith” are not useful in this regard; neither is recounting childhood therapy sessions or, worst of all, talking over and past informants. In yet another promising set-up, Taseer asks a Pakistani “How do you want religion in Pakistan to be?” “In everything” is the reply.

Then Taseer protests that the idea of a republic is “a European concept coming out of ancient Greece,” and the two people are suddenly talking past each other. The author isn’t listening, and we, therefore, learn nothing new.