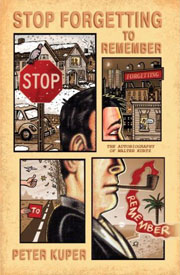 Peter Kuper’s latest work is an extensive self-parody of a cartoonist’s life and an impressive example of autobiographical fiction in a graphic narrative. Kuper portrays his alter ego as Walter Kurtz, a middle-aged cartoonist who invites the reader into his studio to hopscotch between self-absorbed tales of his discovery of sex and drugs in his youth, political parody of the dysfunctional Bush administration based on the 1960s comic Richie Rich, and the problematic experiences of his life as a husband and parent in New York against the backdrop of 9-11.

Kurtz’s initial face-to-face dialogue with the reader—à la Scott McCloud—is set against the backdrop of a posh studio replete with fireplace. When the cartoonist’s wife, Sandra, walks in, the glamorous interior disappears in one big “poof” to expose reality—a few bookcases, a file cabinet, and a drawing board crammed into a small room with papers strewn about the floor. The book juxtaposes the reality of Kurtz’s life with Sandra—her pregnancy, the birth of their daughter, and their subsequent life together—with the imaginary, quizzing the reader about events as he jumps from past to present.

Kuper’s storytelling skill allows these layers of his narrative to flow seamlessly. Cultural icons are scattered throughout the panels, including a memorable sequence in which Kurtz wears Hugh Hefner props—a pipe and a bathrobe—when he flies back through his teenage years to the moment he lost his virginity. Kuper includes tributes to comic strips like Spy vs. Spy, Popeye, and Krazy Kat; Mad Magazine and his own longstanding publication World War 3 Illustrated; and fellow cartoonists such as his peer Seth Tobocman and his elder R. Crumb, the latter of whom is surely among his most important influences.

The book’s crisp black and white artwork changes from black to brown during dream sequences and memories of events; this simple printing device makes the transition from reality and the integration of his inner and outer worlds more startling. While Kuper’s extensive list of works includes award-winning graphic novels like Sticks and Stones and The System as well as his recent adaptation of Franz Kafka’s The Metamorphosis.

Stop Forgetting to Remember may be his best work to date. In it, Kuper has not only catalogued our culture, but he’s created a memorable character in Kurtz—one who ultimately rises above his personal fears and the doomsday cacophony that threatens him, leading to a hopeful conclusion that encourages us to examine our own lives.