IN BED WITH DAVID AND JONATHAN
Tom Bouden
Bruno Gmünder ($22.95) 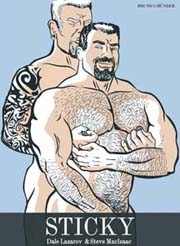 It is also one of the most fully human sex-comics I've ever read, because it explodes the lies ignorant people tell: gay sex is disposable and impersonal; pleasure and caring are opposites; hotness is dangerous; humor is unerotic. Even if Lazarov and MacIsaac did not set out to make a political statement, Sticky is political because it refuses to deny that joyous sex is good for people, and that it's people—whole people, not throbbing, engorged body parts—that have sex. In an increasingly repressive society, acknowledging the truth that people fuck may just be one of the most radical political statements anyone can make. 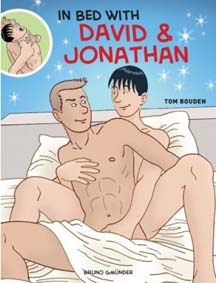 Tom Bouden might agree. "Why do you always draw so many sex scenes?" asks the editor character at the beginning of Bouden's In Bed with David and Jonathan. "I only draw sex so that it's functional," Bouden's döppelganger replies. Functional, to him, means arousing. The gag works, but there's a serious core to the interchange between the characters of author and editor: their conversation highlights the problem of shame. Even in the 21st century, within the legendarily liberated confines of the European continent (Bouden is Belgian), sex is seen as disreputable. To choose to work with sexually explicit material is to risk displeasing someone, at the very least. We may well ask what inspires such cowardice, especially when the sex portrayed is loving, lighthearted, consensual, and shared between obvious adults. Is it because, as the fictional editor here implies, sex on its own supposedly isn't political enough? Do we really think sex has no point other than the orgasm or the wish-fulfillment fantasy that may surround it?

The autobiographical introduction to this superb volume of smutty stories poses these questions rather subtly, by way of setting up the context for the Bouden character's new endeavor—the very book we're holding. In Bed with David and Jonathan is metafiction; like Sticky, these are stories within stories. We can forgive Bouden's self-inclusion because it is not intrusive. And, yes, it's functional. Bouden-as-character responds to an online ad for a "third man," placed by two committed partners interested in a threesome, and as an anniversary gift, gives the pair a copy of In Bed with David and Jonathan. They read it together—and so do we, as if we too were there, lying on the living room floor beside them. As with Sticky, the line between voyeur and participant is very thin.

In Bed with David and Jonathan is a forthright, affectionate, funny look at what five men do in bed (more or less) together. The sex, though rather "vanilla," is certainly functional by Bouden's standards. Vanilla or not, though, this is sex between people. They feel, they vacuum, they get sick, they eat breakfast. There's nothing mechanical or detached about these characters and their fucking. The questions raised in the introduction are not explicitly answered in the stories—but perhaps we readers are meant to answer them for ourselves.

Click here to purchase Sticky at your local independent bookstore