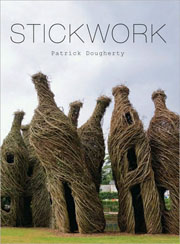 Entering one of Patrick Dougherty’s ephemeral twig wonders is to plunge into daydream—a sinuous, lyrical enfolding of pleasurable, vegetable tangles. Looping, swaying, leaning volumes made of saplings woven in seemingly effortless and wild abandon, Dougherty’s sculptures appear to emerge and grow from their surroundings—sometimes as fancy turrets or teapots, sometimes as clusters of colossal figures. Others erupt inside buildings in spontaneous, euphoric conglomerations of intertwined branches that spiral through the air, twist up banisters, grow through windows or cling to walls.

Monuments to transience, none of Dougherty’s works are built of archival materials to last for eons. Instead, these playful, impermanent objects testify to the organic process of decay and eventual regeneration. Must something live on in perpetuity simply because it was made by a human being? Built on site, where the artist and a crew of volunteers orchestrate a careful hunting and gathering of suitable tree branches and the elaborate process of weaving the sticks, these large-scale creations, first offered to the community where they originate, ultimately succumb to the elements over time. They are built to decompose.

After building his house out of vernacular materials found near his North Carolina home, Dougherty started fashioning his beloved sticks into sculptures. That led him to graduate school to study art. It wasn’t long before he was invited to show in galleries, which led to commissions to make these marvels on location, enabling him to leave behind his career in hospital administration for the life of an itinerant artist.

Far from comprehensive, this monograph offers a tantalizing sample of the more than 200 site-specific stick sculptures Dougherty has erected around the world. An essay by Jennifer Thompson introduces the artist, placing his work in the context of the primal human bond and fascination with trees and sticks. Lovely photographs show each sculpture from various angles, and each work is accompanied by an entry Dougherty wrote, describing in a conversational tone the challenges he faced with things like finding space in an urban area for truckloads of bunched sticks, or the pleasure it gives him to accept that his art “will degrade and become the mulch to nourish new growth.”

Brief and candid, Daugherty’s observations invite the reader to glimpse his artistic process. He divulges his fears and unforeseen obstacles that he deftly transformed into opportunities. After trying to get a large sculpture he built at home through a gallery door, it dawned on him that it might be better to build on location, a revelation that inspired him to make “custom-fit” sculptures. This spawned his practice of gathering local materials to use in his work, another element that gives each sculpture the illusion that it emerged from the spot spontaneously.

Times have changed since he started making stick works, and he acknowledges that there was a gradual shift in how his work was perceived. Writing about Simple Pleasures, a sculpture he built at the Bowdoin College Museum of Art in Brunswick, Maine, he notes that twenty years after the “the sticks were interpreted by the art world as found objects with little connection to nature” he “was billed with much fanfare as an environmental sculptor.” Entering one of Dougherty’s architectural feats (how does he keep this thing that feels as if it is about to topple over from doing just that, without any cables or wires?) feels like the closest a human being can get to climbing inside a nest.

An affable narrator and natural builder, Dougherty’s creations are not chance operations. A fraction of his process might be left open to chance, but he knows his sticks and he likes to “emphasize the visual power of the diagonal line,” often instructing his volunteers to weave sticks in randomly and to give just the right tension to distort the appearance of regularity. Dougherty lets on how difficult it is to create the illusion of spontaneity. Sticks might be pliable, but they’re also tricky to maneuver. He seems to revel in tension of various sorts. With characteristic brevity, he discloses the necessity to overcome some public skepticism he has encountered along the way. Part of the illusion of high art is the appearance of effortlessness, is it not?

Yet Dougherty’s art is accomplished with hard work, without gimmicks. Each project is completed in three weeks. This is the magic number that he applies to carry out each project, including choosing the exact location at the site, reading the site to decide on the form the sculpture will take, finding volunteers, collecting the materials, and finally joining the materials in what he calls a “haphazard snagging.” After close reading of the landscape and consideration of the spirit of the people who commission him, he sets to work expressing his vision using wood in its raw state to create elegant forms that are anything but haphazard.