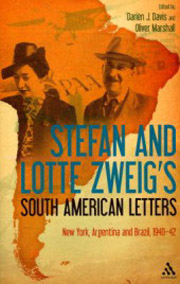 When news of Germany’s invasion of the Soviet Union reached Stefan Zweig, his response was one of unyielding sorrow. Born in 1881, the celebrated novelist and biographer had already endured a series of profound upheavals: at thirty-two, his Jewish ancestry had forced him to emigrate from Vienna, while the atrocities of the First World War had significantly diminished his belief in the superiority of European culture. Now, as he confronted the brutality of the Nazi regime and the failures of the Weimar experiment, Zweig concluded that he had slipped into the third—and final—of his lives. “My generation has become superfluous,” he wrote from New York City. “We have been a failure.” The hopelessness with which Zweig associated Nazi aggression was soon to overcome him: together with his wife, Lotte, he committed suicide in the isolated Brazilian village of Petrópolis in 1942. Zweig was sixty-one, Lotte but thirty-four.

Edited by Darién J. Davis and Oliver Marshall, Stefan and Lotte Zweig’s South American Letters provides a detailed epistolary account of the life and times of one of Europe’s preeminent intellectuals. The collection—which casts Zweig not only as a writer but as a refugee displaced by war—begins with the arrival of Stefan and Lotte in Brazil, where the two, despite mounting anxieties regarding family left in Europe, revel in the allure of Rio de Janeiro. As Davis and Marshall make clear in their thoughtful introduction, at least part of the Zweigs’ fondness for Brazil stemmed from their growing status as celebrities: daily, remembered Lotte, photographs of the couple appeared in South American newspapers. Regarding his own popularity, Stefan referred to a “difference of fate,” as if, by a force greater than himself, he had been selected to escape the “heals of the beast.”

In their letters to Lotte’s brother and sister-in-law, Manfred and Hannah Altmann, the Zweigs struggled, at times, to strike an appropriate tone, referring on several occasions to their “shame” at having discovered in Brazil such a “perfect life.” Still, they expressed as best they could their horror at the “great misery of mankind.” From South America (and, for a short, unhappy period in 1941, the United States), Stefan and Lotte monitored the trajectory of the war, recording their shock at starvation in Occupied France and the sinking of the British passenger liner City of Benares in 1940. As Davis and Marshall rightly suggest, the Zweigs experienced increasing despair as the conflict entered its middle years: Stefan, in particular, conveyed considerable regret at having to think—and write—in the same language as Hitler, while Lotte struggled to keep her asthma (and husband) from spiraling out of control. These were, as Zweig wrote to the Altmanns following the Battle of Britain, “very obscure times.”

While Stefan’s reputation in South America assured the Zweigs safety and financial security, it did not guarantee them a sense of belonging: indeed, in the days preceding his suicide, Stefan referred to himself rather pitifully as a “squatter.” The man whose youth had been spent traversing Europe, and whose biographies had charted its greatest minds, now found himself half a world away, a stranger to the continent that had inspired so much of his work. “I shall never [again] in my life,” he lamented in 1941, “have a real home.” The war, he continued, in a letter published for the first time in this collection, had “destroyed so much.”

Ultimately, Stefan and Lotte Zweig’s South American Letters reads as a cruel story of dislocation and despair: from their arrival in Rio de Janeiro to their dual-suicide in Petrópolis two years later, the Zweigs were unable to relinquish themselves of the knowledge that the people of Europe—once “pleasant and cultured”—were engaged in an endless conflict for racial and territorial supremacy. Through it all, however, the Zweigs continued to write, approaching their correspondence as a form of therapy—one which allowed them, rather like the tortured characters of W. G. Sebald or Joseph Roth, to come to terms with what Stefan referred to in 1942 as the “incertainty and isolation” of war. Their pact complete, the Zweigs succumbed to their desolation—and to the desolation of a generation robbed of its homeland.