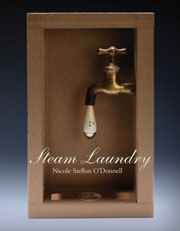 In his essay collection Strange Good Fortune, poet David Wojahn describes the “preponderance of first books and MFA theses which devote their opening section to poems about childhood and family history, moving in later sections to . . . ‘poems vaguely about sex’ and ‘poems about everything else.’” By contrast, Nicole Stellon O’Donnell’s debut Steam Laundry stands out: O’Donnell sets aside her own life, choosing instead to write persona poems focused on Alaskan pioneer Sarah Ellen Gibson.Steam Laundry, rooted in extensive research at the University of Alaska Fairbanks archives, seeks to give Gibson and her family new life in verse, taking their stories out of the archive and into public view.

O’Donnell presents Gibson’s life between 1896 and 1908, tracking her from San Francisco to Yukon Territory and finally to Alaska. Following her husband Joe, Gibson moves among mining camps on the northern frontier. As she carves out a niche as a laundress, she observes, “Where men prospect, women wash / the harsh life out of the land, out of men.” In addition to Gibson and her husband, O’Donnell assumes the voices of Gibson’s two adult sons Elmer and Tom, the lover she takes after her marriage fails, and a prostitute-turned-investment-partner. Through these characters, O’Donnell depicts the realities of the frontier landscape—harsh both in climate and in economic opportunity.

This vision of turn-of-the-century Alaskan life interleaves reproductions of archived photographs, receipts, contracts, and certificates with versified correspondence. While the photographs and other material provide visual authentication, the found poems occasionally fall flat in their everyday language. For instance, lines such as “He can tell the company / they will get the money / through their store at Dawson” add little musicality or imagery. These found poems, however, convey crucial plot points.

At home, I am the quilt suspended,
the half second before it falls
to the mattress, ripple of patches
and labor, floating above
the sagging, empty bed.

Tom wishes for a life like “this breeze . . . rather than the slow gasps / and chocks of the pickaxe.” Joe describes life among prospectors who “raise our arms to acknowledge / what smolders inside each wool coat, / but we don’t stop to speak.” Lines such as these illustrate how, through her research, O’Donnell creates a distinct voice for each character while allowing her own poetic sensibilities to ring clearly.

In O’Donnell’s poems, ordinary objects become powerful symbols of possibility. The steam from the laundries offers baptism into economic prosperity, a way to “be well-off someday, washed / away in the tide of money this rough / land promises.” “The click / of caribou knees, like twigs snapping in chorus”—heard by wounded men unable to hunt—signal chances lost to dumb luck. This unique debut collection presents not only images worth savoring, but a new voice notable in its commitment to shedding light on past lives.