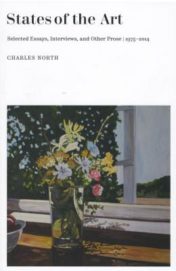 As a poet, Charles North is known for the creation of a new form of poem, the "line-up." A long-time baseball fan, North creates teams of names or of quotations, labeling each with what he intuits would be their corresponding position on a team. For example, in "A Midwinter Lineup," a prose line-up included here, we find a quote from Gertrude Stein—"I like a view but I like to sit with my back turned to it"—labelled "c," for catcher, and Robert Service's "A silence seems a solid thing, shot through with wolfish woe" taking the field as shortstop. The possibilities these assignments (and the title, which carries its own weight of suggestion) open up for fresh insights into the writers are comic, puzzling, and could even become profound, should we persevere through enough innings of thought. In the spirit of this same pastime we might say that North's stance is clear from the moment he steps up to write prose about poetry and its reception: his stance is that of a calm questioning of the usual premises, the supposed givens of his favored subjects (poetry and, to a lesser degree, visual art) and, at times more aggressively, to what others have written about them.

This stance is clear from the first essay of States of the Art, in which Harold Bloom's early enthusiasm for the poetry of John Ashbery makes North uneasy, instinctively so. The piece, "Life in (Mis-) Prison," allows us to observe North's sorting through of his feelings and Bloom's words until he pinpoints the problem: Bloom's enthusiasm is genuine but, "characteristically he manages to subvert, if not swamp, the praise with one of the most elaborated (not elaborate) critical apparatuses to appear in modern times." For anyone familiar with Bloom's theory of misprision, that "characteristically" and the emphatic (not hectoring) parenthetical comment convincingly uncover the self-congratulation at the very center of Bloom's thought.

North looks at how we read poetry—particularly, in "The Indulgence Principle," how we read our favorite poets: indulging "the bulk of their (inferior) work in order to have their very best." He offers a take on what he sees as its other side, the side that "grants a poet the right not to please a reader in every respect: it recognizes that the 'highest thing' is not only rare but inextricable from all the rest." North has his own favorite poets, of course: among them John Ashbery, Elizabeth Bishop, and James Schuyler—on whose work he performs an almost microscope-close reading of the minute revisions Schuyler would make in a poem, and what ripples these would send through the poem as read. Other poets favored here include Joseph Ceravolo, Paul Violi, and Frank O'Hara.

As this list of names shows, North displays a preference for cleaving to the poetic landscape of New York City. He surveys its (expansive and varied, even while easily identifiable) poetics again and again, like radar sweeping a particularly busy piece of the sky. Rather than feeling any provincialism while reading these pieces, the reader comes away with an impression of depth and originality unusual in simple reviews and surveys. The only shortcoming of this is that North ranks Frank O'Hara higher in influence than anyone outside the city's five boroughs would now be likely to do. Of course, as O'Hara died the same year Ashbery's Rivers and Mountains appeared, no one can know what he would have accomplished or become—and North does offer clear and robust explanations for his claims for O'Hara's work.

North feels that the "New York sensibility or aesthetic has by this point filtered down, around and through much of what is being done in the name of American poetry today. . . . Then how come, appearances and awards to the contrary, the state of American poetry isn't in fact very healthy?" North, at the end of this talk, chooses not to answer that complex question, but the observations and considerations here offer ample material to any reader who might want to think this through in a more expansive way.

North does concern himself with more than poetry here, and with places other than NYC (though none at the length of these two core interests): Keats's house at Hampstead Heath makes an appearance, as does the art of Manet, Edith Schloss, and other painters. The art reviews, however, are more traditionally descriptive than the deeper, more digressive pieces on poets and poetry. The contrast suggests that while North likes art, even likes some of it very much, it isn't part of his core self in the way thinking and the art of poetry (and baseball) are.