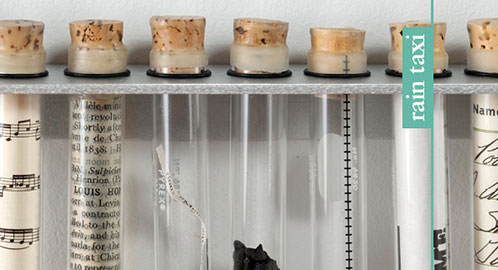 All and Always Balance
Kyle Harvey and Jeff Alessandrelli in Conversation
Two poets discuss their work, their community, integrity of self, and the challenges of being a creator in this world.

Ongoing Arguments with Sarah Manguso
by Scott F. Parker
The river of narrative time isn’t the water but the movement: Sarah Manguso delves into the value of the diary in the final installment of Stories of Self.

Twilight of the Selves: A Walk with David Shields
by Scott F. Parker
Take a walk with the polyvocal David Shields in this, the second in a three-part author conversation series called Stories of Self.

Skepticism and Charitability: A Coffee with Dessa
by Scott F. Parker
We are pleased to present a three-part author conversation series, Stories of Self. Today’s subject is "the Bertrand Russell of hip-hop" herself, Dessa.

The Riches of Kazakh Literature, Part Two: Poetry
by Timothy Walsh
Kazakh poetry is not something new on the world stage; even though it has not gotten the recognition it deserves in the West, it is a poetry with deep roots that predates the founding of the United States by a millennium or so.

The Riches of Kazakh Literature, Part One: Fiction
by Timothy Walsh
With the collapse of the Soviet Union in 1991, a few Kazakh writers were “discovered” by the West—but this only scratched the surface of the deep literary ore running through this storied crossroads of the world.

Frayed Light
Yonatan Berg
Berg’s poems presents a personal story beyond and behind the news: the experiences of a young man who grew up in a West Bank settlement and served as a combat soldier before becoming a poet and bibliotherapist. Reviewed by Gwen Ackerman

Collected Poems of Bob Kaufman
Bob Kaufman
Edited by Neeli Cherkovski, Raymond Foye, and Tate Swindell
Kaufman’s work is lush, romantic, and surreal, informed by jazz and by love and by the gritty milieu of a post-World War II San Francisco. Reviewed by Christopher Luna

Figuring
Maria Popova
Astonishing in heft (almost 600 pages), in scope (lives, works, and milieu of selected European and American scientists, artists, and public intellectuals), and in articulation (attending as much to language and imaginative association as biographical fact), Maria Popova's Figuring is an ode to the quality of astonishment itself. Reviewed by Cindra Halm

Diane di Prima: Visionary Poetics and the Hidden Religions
David Stephen Calonne
This academic study highlights the poetic work of an important literary figure, one who found her own voice and path and serves as an admirable model for all artists. Reviewed by Patrick James Dunagan

Longer
Michael Blumlein
Longer, by the late San Francisco Bay Area writer Michael Blumlein, offers a fantastic journey to both the stars and to places in the heart. Reviewed by Ryder W. Miller