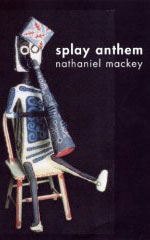 In Nathaniel Mackey’s latest book of poems, Splay Anthem, we see a poet at the height of his powers. Gathering work published over the past decade in journals as various as Calalloo and Conjunctions, Splay Anthem is Mackey’s first book of poems since 1998’s Whatsaid Serif and consists exclusively of poems from two continuing series, “Mu” and “The Song of the Andoumboulou.” The book contains “Mu” parts 15-40 and “Andoumbolou” 40-60, with each poem counting as one in the other series though not named as such. For instance, “Andoumboulou: 40” is also the nineteenth part of “Mu” though the former is not explicitly titled as a “Mu” poem. Begun back in the 1970s, these two open-ended series are Mackey’s greatest achievement to date and make this book essential to anyone interested in the African, American, and African-American future of the avant-garde.

Perhaps one of the most interesting elements of the book is the preface, a “paratext” in Susan Vanderbourg’s sense of the word, that refines and redefines the parameters and purposes of the two twin and incestuously intertwined series. Invoking jazz legend Don Cherry and the funeral rites of Africa’s Dogon tribes, Mackey claims that the most apparent commonality between the poems is music. On the one side, you have the Dogon song, “a long, laconic voice—gravelly, raspy, reluctant—recounting the creation of the world and the advent of human life. Other voices likewise reticent, dry, join in, eventually build into song, a scratchy, low-key chorus.” On the other hand, “Mu” echoes Cherry’s trumpet and Trane’s sax, which in the words of Amiri Baraka, Mackey tells us, sounds like “a grown man learning to speak.” Both descriptions fit one series as well as the other.

Besides music, the poems, according to Mackey, share an interest in myth, migration, and the failure and process of human life. The Andoumboulou, “a failed, earlier form of human life” in Dogon cosmology, emblematize for Mackey humanity as a “work-in-progress.” But in these series Mackey is not content merely to reflect, in some sort of vulgar realism, that failure. “It is also a way of challenging reality,” he writes, “a sense in which to dream is not to dream but to replace waking with realization, an ongoing process of testing or contesting reality, subjecting it to change or a demand for change.” In addition to the musicians, Mackey claims in the preface Charles Olson, Robert Duncan, Edward Dahlberg, and Robert Creeley as the poetry’s literate forbearers, and the Kaluli of Papua New Guinea in addition to the Dogon and American avant-jazz as their cultural ones.

The interpretive nature of this preface challenges us as readers to test its claims for ourselves in our reading of the poems. Like broken shards of a mirror, each piece almost equally reflects each of the above elements. This synechdochic logic can be seen particularly well in the first lines of “Spectral Escort”:

Not exactly a boat or

not only a boat…

fell to us to

back of us. Lipped

Along with Olson’s idea of myth as muthos, Greek for “myth” and “mouth,” which Mackey mentions, this poem also implies Olson’s poetic imperative to “find out for oneself,” since the boat is also a boat and not just a mythic symbol. We also see Creeley’s short line and Duncan’s use of tabs and spaces to denote both song and gaps in visual page space. But beyond these influences, we hear the echoes of African shores painted by drum brushes and the stutter of jazz lead rhythms. This cross-cultural mélange is what Mackey is best known for.

But like the spectral Andoumboulou themselves, this poetry does not always “work,” and praise be. Within the music and the naming of the poems and their paratext is a current of “more than could be said of it said,” in which the poetry overflows its banks and floods chaotically the plane of the book. Such paradoxical phrases, along with the consistently tortured syntax of both series, unsay anything the poem might say or more-say. Understanding the deconstructive limit of any pronouncement or self-description, Mackey understands that his account of the poem in the preface will too fail, as will any critical account. But the preface, in its paratactic and poetic form, embodies not a singular form of argument but a dual movement, like the sides of a crab, that favors the breakdowns and gaps in language as well as its ordered aspect. We see in the poetry not fear for this phenomenon but an enactment of it, in a splayed anthem. Hence the book is divided into three parts, “Braid,” “Fray,” and “Nub,” the last part providing, perhaps, an alternative to the double-bind of opposition:

we ran thru it, earth-sway swaddling

If you are reading Mackey for the first time, the humility embodied in this book provides the perfect entry into his work. Start here and work back, crab-like, through the rest of the poems in these influential series and Mackey’s entire corpus.