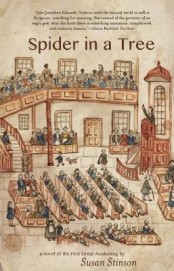 Based on the life of Protestant theologian Jonathan Edwards (1703-1758), Spider in a Tree is a novel firmly grounded in fact: the author has “infused the text” with material drawn from the writing of the preacher and his contemporaries. However, the story is not bogged down with historical detail and the psychological themes explored feel universal, making the book compelling. The characters have a complicated relationship with religion, the ruling force of their lives—to them, the spiritual is more real and important than the physical. Any contention over doctrine, even that which may seem trivial to the modern reader, is a life-or-death situation, and this drives much of the book’s action. The characters also hold conflicting feelings about their faith: spirituality sustains them through the mundane discomfort of colonial life, but the Puritan God is also illogical, angry, and prone to “toy with lives as he pleased without any relationship to sense or reason.” Edwards sees evidence of divine grace everywhere, but in a world “haunted by work and sin,” the characters fight to sublimate their bodies and the natural environment, and their culture is shaped by a belief in the uselessness of earthly pleasure and inevitability of mortality and judgement. This combination of “absence, presence, and consolation” motivates the complicated inner lives of these well-realized characters, whose psyches Stinson explores in empathetic and satisfying depth.